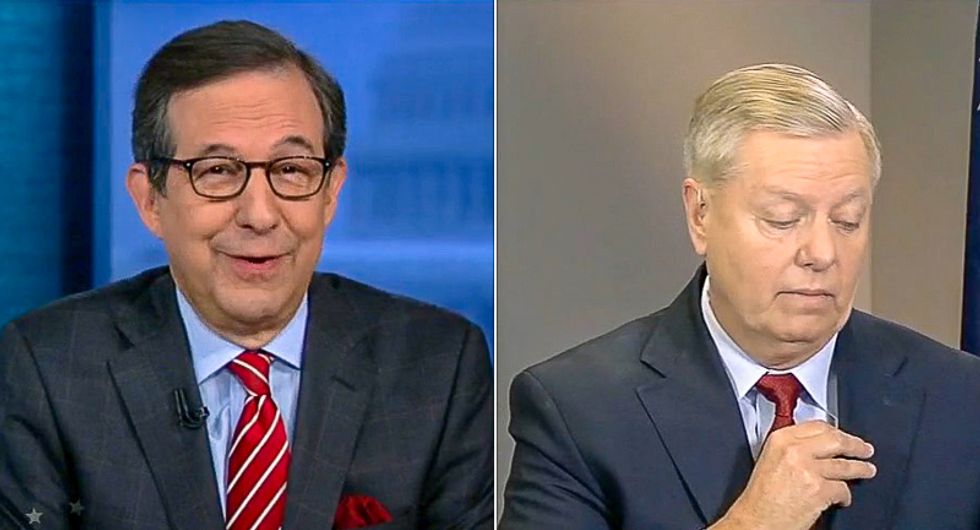 An interview with Sen. Lindsey Graham (R-SC) ended on a sour note on Sunday after he was asked about the political optics of replacing liberal Justice Ruth Bader Ginsburg with a conservative judge.

During an interview on Fox News Sunday, host Chris Wallace noted that Ginsburg missed oral arguments for the first time in her career on the Supreme Court because of her recovery from cancer treatment.

"Here's what will happen if there's a vacancy -- there will be a lot of pushback from the left," Graham replied. "But my Democrat [sic] colleagues felt, when they were in charge, we should confirm judges by a majority vote. They changed the rules to accommodate President Obama, they tried to stack the court, they never thought [Hillary Clinton] would lose."

The South Carolina Republican vowed that the rule change by Democrats would "come back to haunt them."

"I will urge the president to nominate a qualified conservative," he said defiantly. "Hopefully that person will get through and I expect it to be along party lines. And this is what happens when you change the rules. This is come back to bite 'em, I predicted it would and we'll see."

"I'm going to be hellbent to replace [with] a conservative whoever steps down for whatever reason," Graham added.

Wallace noted that replacing Ginsburg with a conservative justice would "make the Kavanaugh hearings look like a tea party."

"They should have thought of that before they changed the rules," Graham snapped. "They tried to destroy conservative judges, I voted for [Sonia Sotomayor] and [Elena Kagan] understanding what I was getting."

"I am dead set on making sure it's a conservative nominee," he insisted. "Elections have consequences. The rules of the Senate were changed, not by me! By them! And [Republicans] had to [change the rules] on the Supreme Court because they would not give us anybody and Kavanaugh was a fine man. They tried to destroy him."

Before ending the interview, Graham demanded to say one more thing.

"We don't need one Democrat to replace a liberal justice and the reason that's the case is because what [former Senate Majority Leader] Harry Reid did," Graham said angrily.

"Always good to speak with you, sir," Wallace said, concluding the interview.

Instead of returning thanks to Wallace, Graham quickly took off his microphone and exited the television set.

"I guess you think it was okay to speak with us," Wallace chuckled.

Watch the video below from Fox.