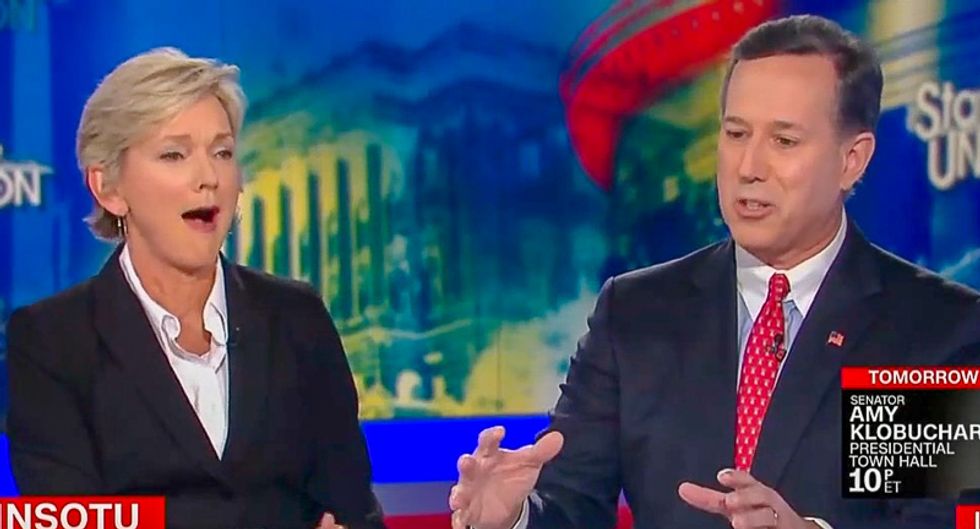 CNN pundit Rick Santorum on Sunday asserted that Amazon's decision not to open a headquarters in New York is a failure of socialism.

During a panel discussion on CNN's State of the Union program, host Dana Bash suggested that Amazon had reversed itself on the Queens headquarters due to pressure from "progressives."

"How about just lowering your tax rates?" conservative panelist Linda Chavez opined. "And then you will, in fact, attract more businesses as states with lower tax rates do."

"Do you know what Amazon paid in taxes last year? Zero," former Gov. Jennifer Granholm pointed out. "In federal taxes. Largely because of the tax breaks that the federal government gives."

"Because they lost money for a long period of time," Santorum interrupted. "The bottom line is [New York City Mayor] Bill DeBlasio is duplicitous in this [in his New York Times op-ed supporting Amazon] because he is one of the reasons they didn't come, because of his comments that were hostile to Amazon about bringing unions in."

"They were very hostile," Santorum shot back. "And so the reality is, you're now seeing America look at what socialism looks like."

"It's hostile to the private sector," Santorum continued. "It plays class warfare no matter how beneficial those things are. And it's not going to be beneficial to New York."

"What?" Granholm gasped, but the CNN host ended the segment before she could rebut Santorum's argument.