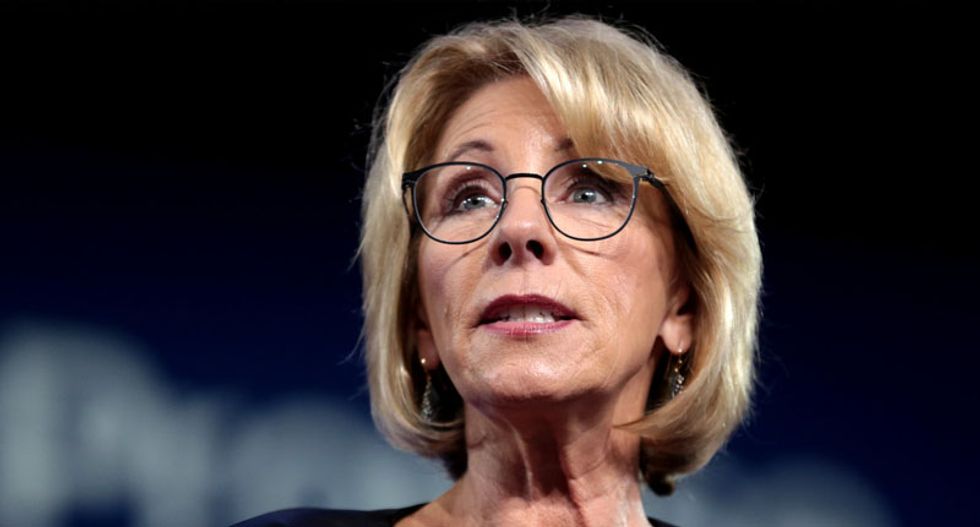 On Tuesday, Education Secretary Betsy DeVos eliminated $18 million in funds from the Special Olympics as well as a 26 percent-cut in special education programs in schools across the county.

“We had to make some difficult decisions,"she said. "We are not doing our children any favors when we borrow from their future in order to invest in systems and policies that are not yielding better results."

"I think the Special Olympics is an awesome organization, one that is supported by the philanthropic sector as well," she said.

i have nothing to say but betsy devos and this administration are truly fucking evil. fucking soulless https://t.co/NSUUMXtACy
— carrie (@carrie)1553646289.0

Just when you thought the Trump admin couldn’t possibly stoop any lower Betsy DeVos and Co. cut all funding for the… https://t.co/W8OUHY6aC5
— Adam Best (@Adam Best)1553627776.0

Besides that 18 million dollars could be spent on secret service protection for the presidents large adult children… https://t.co/08274JwlEP
— Molly Jong-Fast🏡 (@Molly Jong-Fast🏡)1553636192.0

There is absolutely no good reason to cut funding for the Special Olympics except being a cruel and heartless piece… https://t.co/t0KGFCMjmz
— Tony Posnanski (@Tony Posnanski)1553643732.0

WebBreacher: RT Pappiness: Betsy DeVos, on cutting funding to the Special Olympics: "We had to make some difficult… https://t.co/pd3S8Y4SRl
— thesecuritydaily (@thesecuritydaily)1553649027.0