‘They’re not cages’: Secretary Nielsen gets scolded by Dem chair for lying under oath about migrant baby jails 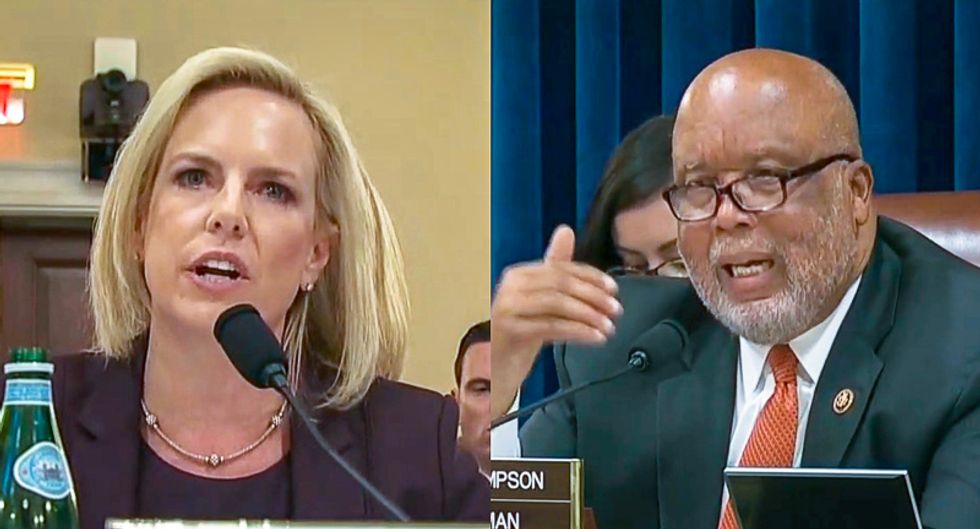 House Homeland Security Chairman Bennie Thompson (D-MS) on Wednesday reprimanded DHS Secretary Kirstjen Nielsen after she insisted that migrant children are not being kept in "cages."

While Nielsen appeared before the committee, Rep. Rep. Elissa Slotkin (D-MI) asked the DHS secretary how she responded when she first learned that children were being taken away from their parents at the border.

"When you saw those pictures of babies in cages, what did you do?" Slotkin wondered. "What did you do to just scream bloody murder up the chain to the president, to say, I cannot represent an agency that is forcing its border patrol to do this? What did you do?"

"So I went to the border," Nielsen replied. "I spoke to the men and women I looked at the facilities myself."

"It just feels like it potentially wasn't enough if we're still dealing with those separations," the congresswoman pressed.

"Just to be clear, we do not," Neilson insisted. "We do not refer parents currently for prosecution, even when they break the law even when entering our country between ports of entry."

At the conclusion of Slotkin's time, Nielsen demanded that Thompson give her a few minutes to explain the detention policy.

"Let me just say, do it in writing," the chairman advised.

Nielsen ignored the warning and continued: "So I just want to just quickly say that the memo [from then-Attorney General Jeff Sessions] that was issued directed all U.S. Attorney offices along the southwest border to prosecute all adults who were referred for prosecution. That's what it did."

"Madam secretary, that is a policy," Thompson shot back. "When you knew that that policy was going to result in children having to be taken away from their parents. That's a policy. You should admit it."

"That wasn't the point of it," Nielsen protested. "The point was to increase prosecutions for those breaking the law and not exempt any class of aliens."

"For the record, Madam Secretary, are we still using cages for children?" Thompson asked.

"Sir, we don't use cages for children," the DHS secretary said. "Yes. I'm being as clear as I can, sir. Respectfully, I'm trying to answer your question."

"Just yes or no. Are we still putting children in cages?" Thompson asked again.

"To my knowledge, [Customs and Border Patrol] never purposely put a child in a cage," Nielsen stated.

"Purposely or whatever. Are we putting children in cages? As of today?" Thompson wanted to know. "I've seen the cages. I just want you to admit that the cages exist."

"Sir, they're not cages," Nielsen remarked.