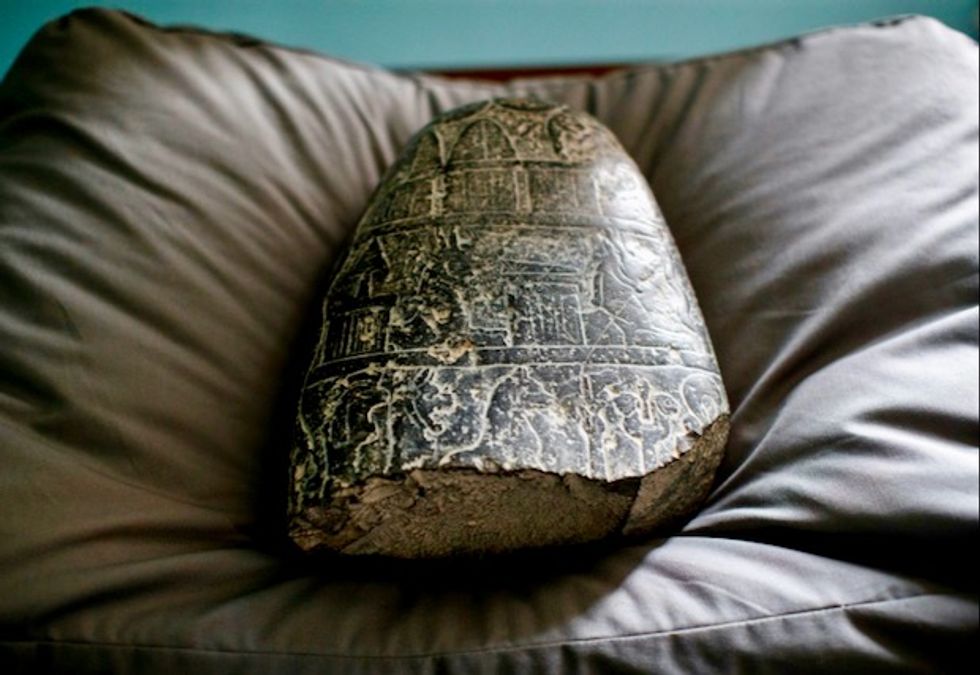 A 3,000-year-old carved stone tablet from Babylonia, which promises a curse on those who would destroy it, is to be flown home from Britain after being looted during the Iraq War.

British Museum boss Hartwig Fischer handed over the priceless work to Iraqi Ambassador Salih Husain Ali during a ceremony on Tuesday after museum experts had verified its provenance.

"It is a very important piece of Iraq's cultural heritage," said Fischer, praising the "extraordinary and tireless work" of border officials.

They spotted the object at London's Heathrow airport in 2012 and contacted the museum after being presented with fake documents.

"They seized this item when they saw it at a British port and several years later, after a lot of legal work, we are able to effect this transfer," said Michael Ellis, Britain's Minister for Arts, Heritage and Tourism.

"It's a very important and significant moment."

It is still not clear how the object was taken out of Iraq, "but we believe it was probably stolen about 15 years ago during troubles in Iraq," he said.

The kudurru is a ceremonial stone tablet recording the legal gifting of land by the Babylonian king Nebuchadnezzar I to one of his subjects in return for distinguished service, according to curator Jonathan Taylor.

On one side are depictions of the great Babylonian gods Enlil and Marduk, and on the other, legal text written in cuneiform, the Babylonian alphabet.

Taylor said the object also carried "terrible curses" for anyone trying to claim the land or damage the tablet.

Fewer that 200 such objects are known to exist, and the one handed over on Tuesday was broken in antiquity and eroded, presenting a problem for sleuths trying to establish its history.

"The basic identification is quite straightforward," said Taylor.

"More difficult is tying down exactly who the king is and what the circumstances are, for that we need to read the inscription and it's quite worn, there's a lot of damage in the middle of the text," he said.

"It's old fashioned bookwork. We have a few clues."

They established the king was Nebuchadnezzar I, "a kind of national hero, a legend in his own life time".

The stone is thought to have originally been on display in the ancient city of Nippur, now in central Iraq.

"It's more than just a carved stone... It is a testament to the remarkable history of the Republic of Iraq," said Ellis.