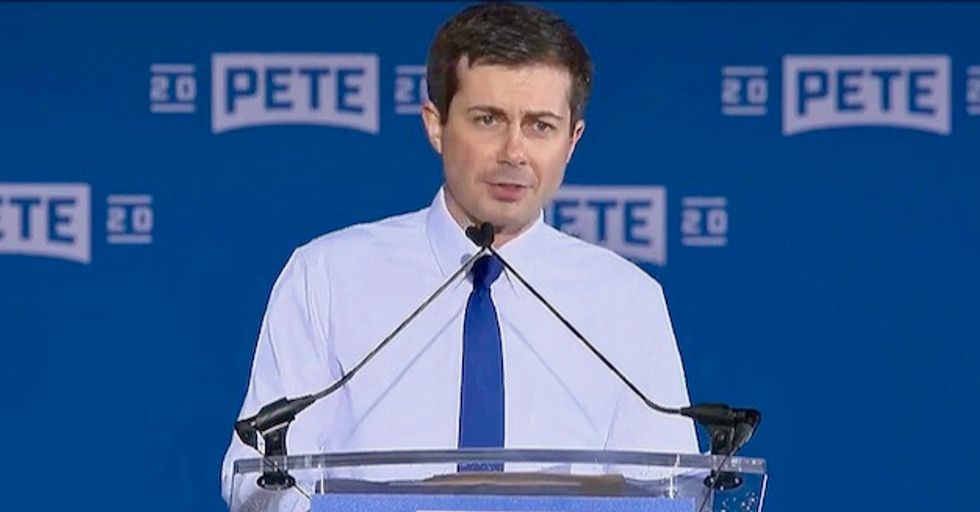 "Please stop telling us what kind of sex you like," Christian school's president says, only because Buttigieg – who has never talked about sex in his campaign – is married to a man. "This is a matter of your proclivities," and "your personal peccadillos," says Dr. Piper.

Dr. Everett Piper is the president of Oklahoma Wesleyan University, a small private evangelical Christian college that leans far to the right.

He's also a contributing columnist at The Washington Times, a newspaper founded in 1982 by a conglomerate owned by the Unification movement, a Christian church founded by Rev. Sun Myung Moon. Born in what is now North Korea, Rev. Moon believes he is the "messiah," and has created an entirely new "brand" of Christianity known to many for the mass weddings of thousands of people like the 1982 mass wedding of 2000 couples in New York City's Madison Square Garden.

So it's incredibly ironic – and hypocritical – for Dr. Piper to have penned an attack on Indiana Mayor Pete Buttigieg, a prominent 2020 Democratic candidate for president, accusing him of making up his own Christianity.

"Pete Buttigieg doesn't get to make up his own Christianity," Dr. Piper writes, in a newspaper founded by a man believes he is the second coming of Christ and literally made up his own brand of Christianity and spread it around the world.

“My [homosexual] marriage ” said Mr. Buttigieg, “has made me a better man. And yes, Mr. Vice President, it has moved me closer to God If being gay was a choice, it was a choice that was made far above my pay grade. That’s the thing I wish the Mike Pences of the world would understand, that if you have a problem with who I am, your problem is not with me. Your quarrel, sir, is with my creator.”

Piper, who clearly does not care for or respect LGBTQ people, like so many far right wing religious extremists, boils them down to a sex act.

"Mr. Buttigieg, has it ever occurred to you, that the 'Mike Pences of the world' don’t have a problem with 'who you are,' but rather we just disagree with what you do? We believe human identity is much more than the sum total of someone’s sexual inclinations. In fact, the 'creator' whom you so boldly reference makes this pretty clear."

What if LGBT people talked about heterosexual people's marriages as merely "what you do"? Can you imagine, and rightly so, the outrage?

Dr. Piper's attack is far from over.

"You see, Mr. Mayor, this is a matter of your proclivities, not your personhood," Piper claims, as if marriage is a proclivity."

"What you don’t seem to understand is that when it comes to your personal peccadillos, most all of the 'Mike Pences of the world' really don’t want to know. Your sexual appetites are your business. The thing about obedient and faithful Christians is this; we consider someone else’s private life to be just that — Private. Please stop telling us what kind of sex you like. We don’t want to know. If you want us to stay out of your bedroom, please shut the door. Stop opening it up and forcing us to applaud and celebrate," Piper commands.

The school Dr. Piper runs ranks in the bottom half (85 out of 140) of US News' Best Regional Universities West Rankings.

It's likely safe to say if there are any LGBT students or faculty there, they likely are not safe from Piper's wrath.