Why is pot banned in some states? The real reasons are worse than you think 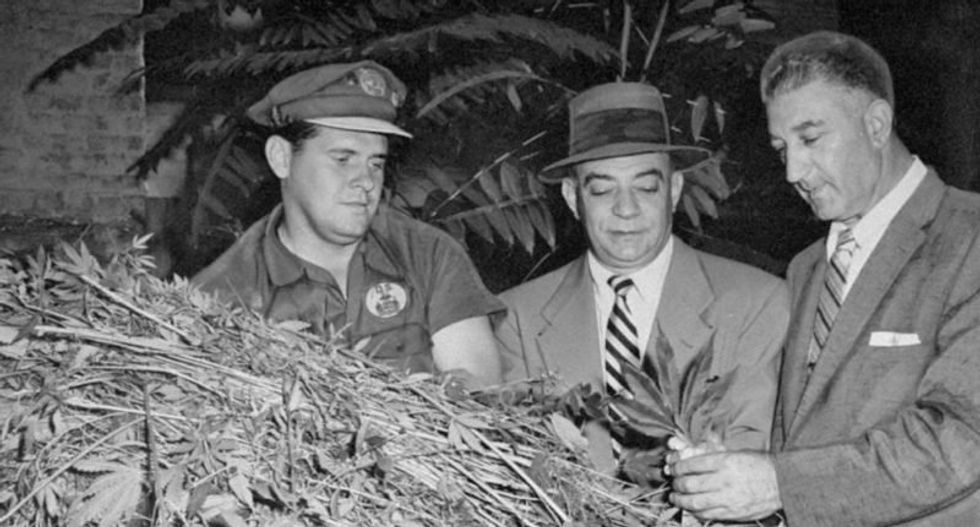 Across the world, more and more people are asking: Why is marijuana banned? Why are people still sent to prison for using or selling it?

Most of us assume it’s because someone, somewhere sat down with the scientific evidence, and figured out that cannabis is more harmful than other drugs we use all the time—like alcohol and cigarettes.

Somebody worked it all out, in our best interest.

But when I started to go through the official archives—researching my book Chasing The Scream: The First and Last Days of the War on Drugs—to find out why cannabis was banned back in the 1930s, I discovered that’s not what happened.

In 1929, a man called Harry Anslinger was put in charge of the Department of Prohibition in Washington DC. But alcohol prohibition had been a disaster. Gangsters had taken over whole neighborhoods. Alcohol—controlled by criminals—had become even more poisonous.

So alcohol prohibition finally ended–and Harry Anslinger was afraid. He found himself in charge of a huge government department, with nothing for it to do. Up until then, he had said that cannabis was not a problem. It doesn’t harm people, he explained, and “there is no more absurd fallacy” than the idea it makes people violent.

But then—suddenly, when his department needed a new purpose—he announced he had changed his mind.

He explained to the public what would happen if you smoked cannabis.

Marijuana turns man into a wild beast. If marijuana bumped into Frankenstein’s monster on the stairs, Anslinger warned, the monster would drop dead of fright.

Harry Anslinger became obsessed with one case in particular. In Florida, a boy called Victor Lacata hacked his family to death with an axe. Anslinger explained to America: This is what will happen when you smoke “the demon weed.” The case became notorious. The parents of the US were terrified.

What evidence did Harry Anslinger have? It turns out at this time he wrote to the 30 leading scientists on this subject, asking if cannabis was dangerous, and if there should be a ban.

Twenty-nine wrote back and said no.

Anslinger picked out the one scientist who said yes, and presented him to the world. The press—obsessed with Victor Lacata’s axe—cheered them on.

In a panic that gripped America, marijuana was banned. The US told other countries they had to do the same. Many countries said it was a dumb idea, and refused to do it. For example, Mexico decided their drug policy should be run by doctors. Their medical advice was that cannabis didn’t cause these problems, and they refused to ban it. The US was furious. Anslinger ordered them to fall into line. The Mexicans held out—until, in the end, the US cut off the supply of all legal painkillers to Mexico. People started to die in agony in their hospitals. So with regret, Mexico sacked the doctor—and launched its own drug war.

But at home, questions were being asked. A leading American doctor called Michael Ball wrote to Harry Anslinger, puzzled. He explained he had used cannabis as a medical student, and it had only made him sleepy. Maybe cannabis does drive a small number of people crazy, he said—but we need to fund some scientific studies to find out.

Anslinger wrote back firmly. “The marihuana evil can no longer be temporized with,” he explained, and he would fund no independent science. Then, or ever.

For years, doctors kept approaching him with evidence he was wrong, and he began to snap, telling them they were “treading on dangerous ground” and should watch their mouths.

Today, most of the world is still living with the ban on cannabis that Harry Anslinger introduced, in the nation-wide panic that followed Victor Lacata’s killing spree.

But here’s the catch. Years later, somebody went and looked at the psychiatric files for Victor Lacata.

It turns out there’s no evidence he ever used cannabis.

He had a lot of mental illness in his family. They had been told a year before he needed to be institutionalized—but they refused. His psychiatrists never even mentioned marijuana in connection to him.

So, does cannabis make people mad?

So does that happen? We have a lot of data from a lot of countries. And it turns out it doesn’t. For example, in Britain, cannabis use has increased by a factor of about 40 since the 1960s. And rates of psychosis? They have remained steady.

In fact, the scientific evidence suggests cannabis is safer than alcohol. Alcohol kills 40,000 people every year in the US. Cannabis kills nobody—although Willie Nelson says a friend of his did once die when a bale of cannabis fell on his head.

This is why, in 2006, a young man in Colorado called Mason Tvert issued a challenge to the governor of his state, John Hickenlooper. Hickenlooper owned brew-pubs selling alcohol across the state, and it made him rich. But he said cannabis was harmful and had to be banned. So Mason issued him a challenge—to a duel. You bring a crate of booze. I’ll bring a pack of joints. For every hit of booze you take, I’ll take a hit of cannabis. We’ll see who dies first.

It was the ultimate High Noon.

Mason went on to lead the campaign to legalize cannabis in his state. His fellow citizens voted to do it—by 55 %. Now adults can buy cannabis legally, in licensed stores, where they are taxed—and the money is used to build schools. After a year and a half of seeing this system in practice, support for legalization has risen to 69 %. And even Governor Hickenlooper has started calling it “common sense.”

Oh—and Colorado hasn’t been filled with people hacking their families to death yet.

Isn’t it time we listened to the science—and finally put away Victor Lacata’s axe?

A councilman in Decatur, Alabama, is under fire over a post on Facebook in which he joked about running over Black protesters.

"Clearly, there are many mixed emotions about the situation but I will say this and I am going to make my myself clear on it, I am NOT a racist individual," Hunter Pepper wrote on his Facebook page Sunday in response to the criticism.

Fox News host Maria Bartiromo on Sunday struggled to believe Sen. Lindsey Graham (R-SC) after he claimed that there would be an "invasion" of "1 million" migrants by the summer of 2021.

Graham made the assertion during an interview on Fox News.