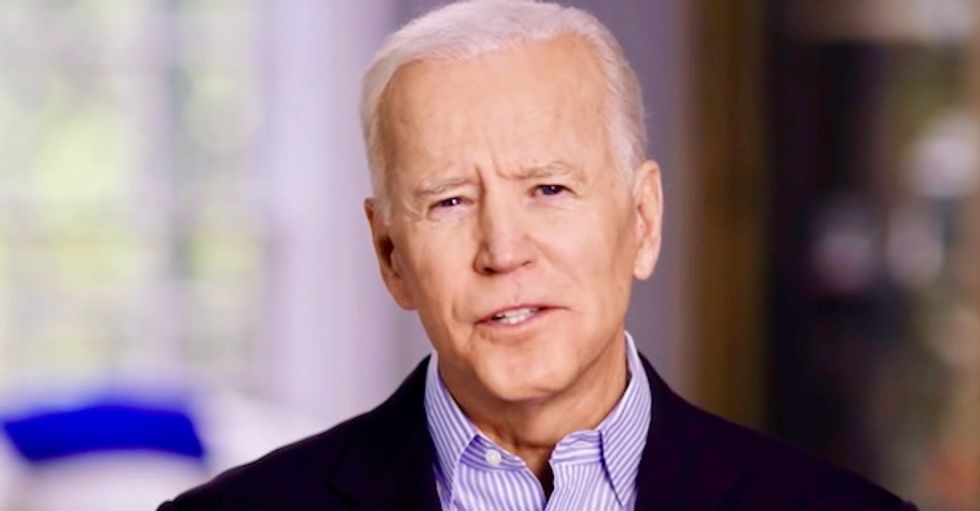 Sections of the former vice president's plan, noted an observant climate campaigner, "looked like the type of thing the coal industry, trade groups, and coal companies themselves say.

Almost immediately after releasing a climate plan Tuesday that green groups slammed as woefully inadequate in part due to its embrace of industry-backed proposals such as "carbon capture," presumptive 2020 Democratic frontrunner Joe Biden faced accusations of plagiarizing language from a number of sources, including a coalition consisting of major fossil fuel companies.

Josh Nelson, vice president of the progressive organization CREDO Mobile, was the first to highlight possible instances of plagiarism in Biden's plan, noting on Twitter that the section "about carbon capture and sequestration includes language that is remarkably similar to items published previously by the Blue Green Alliance and the Carbon Capture Coalition"—two organizations backed by major fossil fuel companies and labor unions.

"Membership of the Carbon Capture Coalition, where some of Biden's language seems to have originated, includes Shell, Peabody Energy, Arch Coal, and Cloud Peak Energy."

In a paragraph about carbon capture, the former vice president's plan—which has since been updated with citations—read: "Biden's goal is to make CCUS a widely available, cost-effective, and rapidly scalable solution to reduce carbon emissions to meet mid-century climate goals."

The line from Biden's plan, as Business Insider reported, was "almost identical to the 'our work' section of the website for the Carbon Capture Coalition's Center for Climate and Energy Solutions."

In response to the plagiarism accusations—which spread rapidly on social media and were picked up by a number of media outlets—Biden's presidential campaign said "citations were inadvertently left out of the final version of the 22-page document."

"As soon as we were made aware of it, we updated to include the proper citations," the campaign said in a statement.

While some observers noted that it is hardly uncommon for presidential candidates to take policy language from advocacy groups and other sources, Nelson told USA Today that parts of Biden's plan stood out because they "looked like the type of thing the coal industry, trade groups, and coal companies themselves say about carbon capture and sequestration."

Biden, who has a long history of plagiarism scandals, has yet to personally comment on the accusations.

In a Twitter thread on Tuesday, climate researcher and University of California, Santa Barbara professor Leah Stokes said Biden's proposal to confront the climate crisis—which was released amid growing pressure and criticism from grassroots environmental groups—reads like a "cribbed plan."

"As a professor, I've seen plagiarism before," Stokes wrote. "It's like his team copied off of his competitors, using all the same keywords ('environmental justice,' 'Green New Deal') but with less substance."

"I have no problem with campaigns borrowing ideas with one another," Stokes added. "But there needs to be substance and commitment behind those plans. I am wary that we will find empty words with the Biden team."

Green groups echoed Stokes' concerns about the substance of Biden's plan prior to accusations that parts of the proposal were lifted straight from industry-friendly organizations.

In a statement following the release of Biden's plan on Tuesday, Wenonah Hauter—executive director of Food & Water Action—described the proposal as "a cobbled-together assortment of weak emissions targets and unproven technological schemes that fail to adequately address the depth and urgency of the climate crisis we face."

"This plan cannot be considered a serious proposal to tackle climate change," Hauter said. "Biden's focus on 'net zero' emissions, carbon capture programs, and vague pollution pricing schemes all point to one outcome: a society continuing to be dominated by fossil fuels, and a future of irrevocable climate chaos."