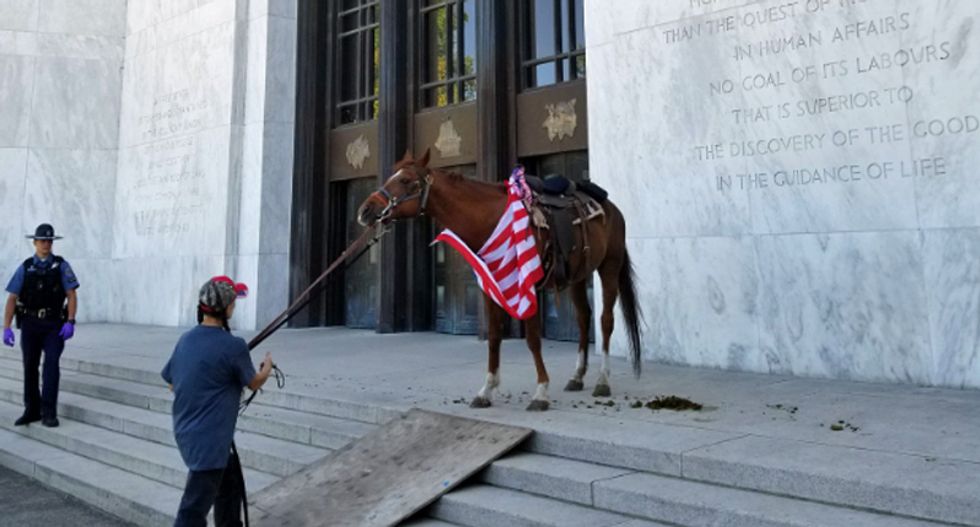 A horse on the steps of the Oregon State Capitol (Twitter)

A horse defecated on the steps of the Oregon State Capitol on Saturday as the fallout continued following the decision of state Republicans to flee the state.

"Oregon Democratic leaders canceled plans to hold a session Saturday after several groups vowed to protest in support of the Republican senators’ who walked out this week to avoid a vote on a massive climate bill," The Oregonian reported.

Republicans senators had fled the state to avoid a vote, with Democratic Gov. Kate Brown sending out Oregon State Police in pursuit.

"Marion County Republicans, which had organized an 'Occupy the Senate' rally for Saturday and a number of Three Percenter militia groups canceled their Saturday protests, too, but encouraged turnout Sunday, when Senate President Peter Courtney had scheduled a 10 a.m. session," the newspaper reported.

Not everyone got the memo the rally had been called off.

KGW-TV weekend anchor Maggie Vespa reported that somebody had led a horse up the stairs -- and it refused to come down.