Canadian iceberg hunter on the trail of white gold 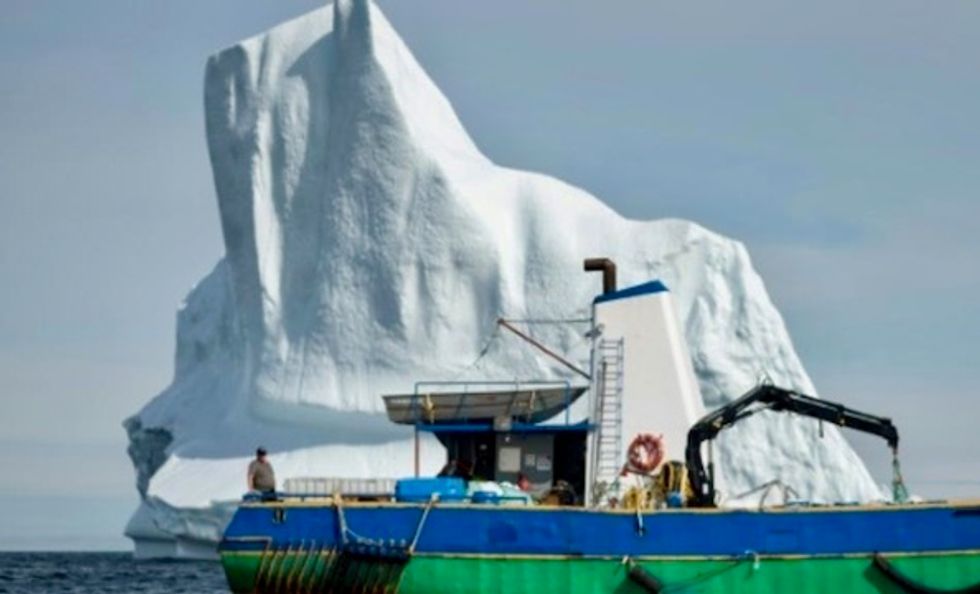 It's midday and Edward Kean, a Canadian fisherman who now scours the North Atlantic for icebergs that have broken off from Greenland's glaciers, is positively beaming.

Using his trusty binoculars, the rotund, 60-year-old captain of the fishing boat 'Green Waters' has spotted his next prize -- it's several dozen meters tall and floating just off the coast of Newfoundland.

Every morning at dawn, Kean sails out with three other crew members to hunt what has become his own personal white gold: icebergs.

For more than 20 years, he has hauled in the mighty ice giants and then sold the water for a handsome profit to local companies, which then bottle it, mix it into booze or use it to make cosmetics.

Business has soared in tandem with the warming of the planet, especially quick in the Arctic, meaning that more and more icebergs find their way south.

But it's a tough gig. The days are long and the "harvest" isn't easy.

For this particular prize, which he first picked up using a satellite map, Kean has to sail about 24 kilometers (15 miles).

To kill time, the crew members swap jokes in the colorful local dialect -- English with a Scottish and Irish lilt.

"Even I struggle to understand them sometimes," laughs the captain, who lives in St John's, the capital of the eastern province of Newfoundland and Labrador.

Arriving at the foot of the massive wall of floating ice in Bonavista Bay, which opens into the Atlantic, he shoulders a rifle and blasts away in the hopes that some of it will break off.

One, two, three shots ring out. The air shudders with the noise and the crew hold their breath. But the ice does not split.

- Race against the clock -

As summer gets under way, time is of the essence in harvesting the icebergs.

"They come here and they melt so fast," noted the captain, adding that once they are floating off the coast of Newfoundland, it is a real race against the clock.

"In Newfoundland, it's like a fallen leaf. They're going to die in a couple of weeks and be gone back to nature anyway," he said.

"So we're not here hurting the environment, we're not taking nothing away -- we're just utilizing the purest water we can get."

Two members of his crew set out on a motorboat, circling the iceberg, even brushing against it, to find blocks of ice that may be bobbing next to it.

Armed with a pole and net, they laboriously wrap up the precious fragments, each one weighing a ton or two, and fasten them to a hook at the end of a crane on the fishing boat's deck, which winches them aboard.

Kean then hacks the blocks up with an ax and puts the pieces into 1,000-liter (265-gallon) containers to melt over the coming days.

In the high season, from May to July, the crew can gather 800,000 liters of water, which they then sell to local merchants for a dollar a liter.

Those businesses in turn market the iceberg products as made from some of the purest water money can buy.

Dyna Pro, one of Kean's clients, sells the water in glass bottles for Can$16 (US $12) each. They are targeting a wealthy clientele and have hopes to expand their business abroad.

"We just picked up clients from the Middle East with our glass bottles."

The popular Auk Island Winery, in the tourist village of Twillingate, makes wine from wild berries and iceberg water -- and sells it for Can $10-90 a bottle.

"We use iceberg water because it is the clearest, cleanest water that we have available on the planet, really, says employee Elizabeth Gleason.

"It will give you a very clean, very pure taste of whatever it is paired with."

US tourist Melissa Axtman, who has family roots in Newfoundland, said she was "enjoying all the things made out of iceberg water."

But she acknowledged "good things and bad things" about the increasing number of icebergs, a symptom of climate change.

Experts say the Arctic is warming three times faster than the rest of the planet.

Despite the success of the products, the crew of the Green Waters remains small and the tools they use for the harvest have barely changed in decades.

"Nobody wants to manually work at this type of work anymore," said Kean, who has trouble keeping crew members for long.

"Hopefully we can make it carry on for the coming years, but I'm 60, so time is running out for me," he said.