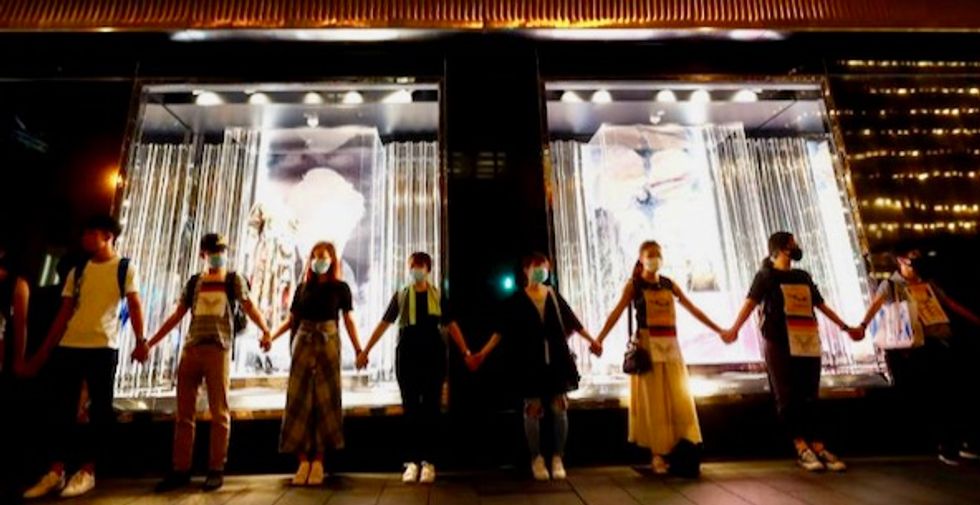 Demonstrators, some masked, some using hand wipes to stay clean, linked hands across different districts as others held up banners thanking overseas nations for supporting “freedom and democracy” in Hong Kong.

In 1989, an estimated two million people joined arms across three Baltic states in a protest against Soviet rule that became known as the “Baltic Way” or “Baltic Chain”.

“I joined the Hong Kong Way because it’s peaceful,” said protester Peter Cheung, 27. “This is the 30th anniversary of the Baltic Way. I hope there will be a bigger chance to make an international noise.”

The protests, triggered by a now-suspended bill that would have allowed extraditions to China, have plunged the former British colony into its worst crisis since its return to China in 1997 and pose a major challenge for Communist Party rulers in Beijing.

The unrest has widened into calls for greater freedom, fuelled by worries about the erosion of rights guaranteed under a “one country, two systems” formula, adopted after the 1997 handover, such as an independent judiciary and the right to protest.

Protesters are also planning a “stress test” of the airport this weekend.

The airport, reached by a gleaming suspension bridge carrying both rail and road traffic, was forced to close last week when protesters, barricading passageways with luggage trolleys, metal barriers and other objects, clashed with police.

The Airport Authority published a half-page notice in newspapers urging young people to “love Hong Kong” and said it opposed acts that blocked the airport, adding that it would keep working to maintain smooth operations.

The Canadian consulate said it had suspended travel to mainland China for local staff, just days after a Chinese employee of the city’s British consulate was confirmed to have been detained in China.

Beijing has said that Simon Cheng, the consulate employee, was detained in the border city of Shenzhen neighbouring Hong Kong. It has accused Britain and other Western countries of meddling in its affairs in Hong Kong.

Chinese foreign ministry spokesman Geng Shuang said Canada’s decision not to allow local staff to visit the mainland was one for Canada, which it respected. If people came to China and followed the law, they would have no problems, he told a daily news briefing.

“But if you have a hidden aim, and are hatching a sinister plot, then I fear in China you need to be in a state of apprehension and extra careful.”

The Foreign Correspondents’ Club of China said it had received multiple reports of Chinese border officials detaining journalists and searching their digital devices when travelling between the mainland and Hong Kong.

The protests are taking a toll on Hong Kong’s economy and tourism, with the special administrative region on the cusp of its first recession in a decade.

Transport Secretary Frank Chan said airport passenger volume from Aug. 1 to Aug. 21 was down 11% from the same period last year, with cargo volume down 14%.

Commerce Secretary Edward Yau said visitor arrivals started to fall in mid-July. For Aug. 15 to Aug. 20, arrivals were down 49.6% on the corresponding 2018 period.

“It was the fastest and steepest drop in recent years, and the situation is obviously very worrisome,” he told reporters.

The protests have caused corporate casualties, most dramatically at the Cathay Pacific airline, amid mounting Chinese scrutiny of the involvement of some of its staff in protests.

Cathay confirmed on Friday that Rebecca Sy, the head of Cathay Dragon’s Airlines Flight Attendants’ Association, was no longer with the company. Her departure follows the shock resignation of Cathay Chief Executive Rupert Hogg last week.

Demonstrators have five demands: withdraw the extradition bill, set up an independent inquiry into the protests and perceived police brutality, stop describing the protests as “rioting”, waive charges against those arrested, and resume political reform.

Beijing has sent a clear warning that forceful intervention is possible, with paramilitary forces holding drills just over the border.