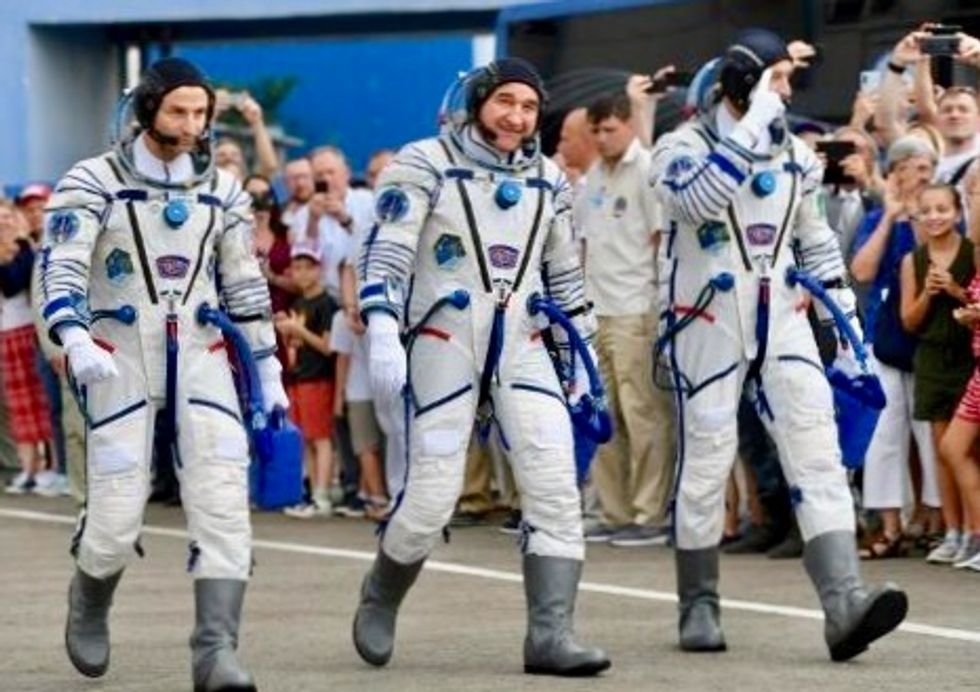 Russia on Thursday unveiled a new space suit for a future spaceship, but the design may have to be changed to continue a decades-old tradition: making a stop to pee on the way to the launch.

The Sokol-M prototype suit was demonstrated at an airshow outside Moscow, as a future replacement for suits currently worn during launches to the International Space Station on Soyuz spacecraft.

The Soyuz, in use since the 1960s, is set to be phased out and replaced in the next few years with a new Russian ship called the Federation.

The maker of the suits, aerospace firm Zvezda, says they will be made of "new materials" and adaptable to different body sizes. The current suits must be custom-made for each individual.

But the new design makes it impossible to carry on one particular ritual launched by the first man in space Yury Gagarin, who had to stop and relieve himself on the back wheel of the bus that was taking him to the launch pad in 1961.

The stop has been replicated at every launch from the Baikonur launch pad and many male cosmonauts and astronauts pee on the tire for good luck -- something that would be impossible in the new suit, according to its maker.

Women astronauts are not obligated to participate but some have been known to bring vials of their urine to splash on the tire instead.

"I'm not sure how they will be able to (carry on the tradition), since we haven't designed the fly," Zvezda director Sergei Pozdnyakov said.

"We have the design specifications. They don't state that it's necessary to pee on the wheel," he said, quoted by Russian agencies.

"The design specifications would need to be adapted."

The bright orange Sokol-M suit sports one diagonal zipper, rather than the currently used white Sokol-K, which has a V-shaped opening pointing to the crotch area.

The new suit is lighter due to the zipper and all seams being airtight, so there is no longer a need for the internal rubberised layer known as "the bladder" which is difficult to get in and out of.

All members of the ISS crew currently have to wear the made-to-measure Sokol-K suits, since they must be worn on the Soyuz spacecraft that brings cosmonauts and astronauts to orbit.

The suits are made to be comfortable while reclining in the deep Soyuz chairs, but are heavy and contribute to a noticeable stoop when walking up to the rocket.

The Soyuz launches are full of rituals, in which cosmonauts plant trees at Baikonur, get haircuts, watch the Soviet classic "White Sun of the Desert" and have an Orthodox priest fling holy water on them.