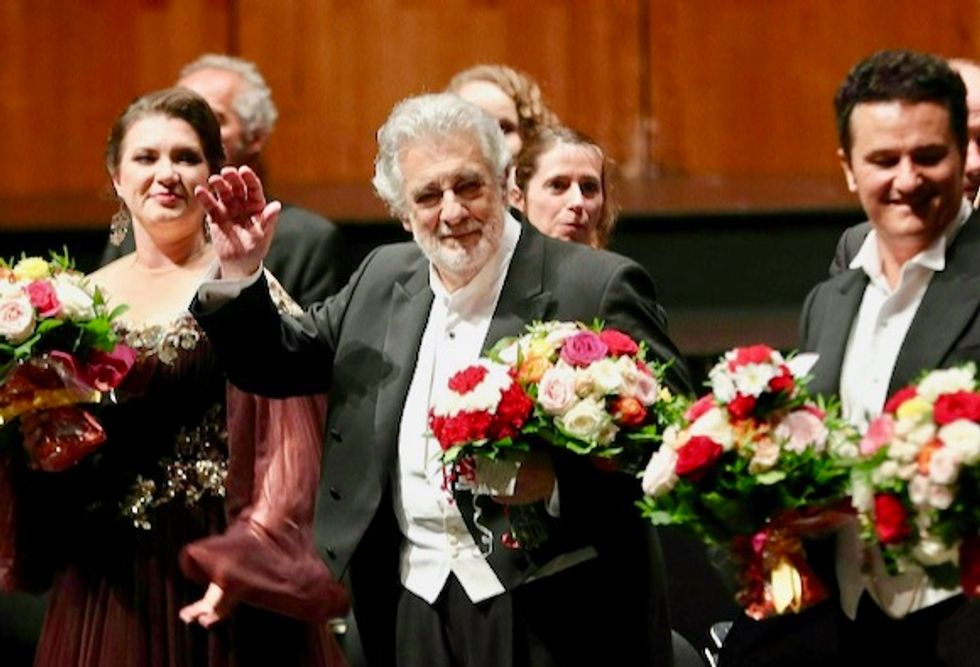 Mere weeks after sexual assault allegations against Placido Domingo became public, a chorus of bravos resounded in Salzburg for the prolific opera singer, who blew kisses while receiving a standing ovation.

It was his first of several upcoming European performances -- he will appear in Szeged, Hungary on Wednesday -- that remained on deck despite the #MeToo scandal festering against him, with numerous women saying the 78-year-old sexually harassed them over the course of decades.

Classical music companies stateside were quick to err on the side of caution, with the Philadelphia Orchestra and San Francisco Opera immediately canceling his upcoming performances when news of the accusations broke.

But houses in Europe took more of a wait-and-see stance, with some throwing their support behind the storied tenor-turned-baritone.

And as many American performers publicly condemned the alleged actions, European singers jumped to his defense.

"What I saw was someone who is kind, who is a man who loves women, like I love men, and that is not a problem," she told Spanish news radio.

The divergent reactions underscore a split between the US and Europe over the #MeToo movement, highlighting their longstanding cultural debate on how a society should or should not celebrate the art of individuals despite lurid testimonies concerning their actions.

Filmmaker Roman Polanski is perhaps the most prominent cultural figure that Europe has welcomed despite his conviction for statutory rape in the United States, which continues to seek his extradition since he fled to France in 1978 while awaiting sentencing.

Polanski is now set to show his 13th production at the Venice Film Festival, but still has no US distributor.

Woody Allen's latest film was dropped by Amazon amid renewed scrutiny of his alleged sexual assault of his adopted daughter, an allegation he fervently denies.

It may never be shown stateside, even as it's starting to screen in Europe.

Dubbing the continued acceptance and praise of such figures "just horrible," Audrey Clinet, co-founder of EROIN, a company dedicated to supporting emerging female film directors, said a sort of "free pass" is still being given to creative types valued for their contributions to the arts.

"It's insane to see that -- everyone knows what kind of people they are," the 32-year-old Parisian, who is now based in Los Angeles, told AFP.

"Why are they still working?"

That viewpoint surfaced again as the #MeToo movement took off in 2017, after film mogul Harvey Weinstein fell from grace.

French screen legend Catherine Deneuve was among 100 women to sign an open letter defending men's freedom to "hit on" women and railing against the new "puritanism."

Americans too have pointed to a certain "European" art of seduction in letting accusations slide: actress Anjelica Huston, who was at the party where Polanski's crime took place, says it was just the way things were.

"It's a story that could've happened 10 years before in England or France or Italy or Spain or Portugal, and no one would've heard anything about it. And that's how these guys enjoy their time," the 68-year-old star said in an interview with New York Magazine earlier this year.

"It was a whole playboy movement in France when I was a young girl," said the actress, who has starred in several of Allen's films. "It was de rigueur for most of those guys like Roman who had grown up with the European sensibility."

French historian Laure Murat of the University of California, Los Angeles, rejected that viewpoint in a 2018 interview with French publication Mediapart, saying "to shout about puritanism and censorship is a lazy shortcut."

Behind the systematic defense of the "great artist," Murat pointed to "a deliberate desire to not join the debate."

Two years on, Clinet worries that scandal fatigue is overwhelming the initial fire of #MeToo.

She's optimistic for the future, though, because youth on both sides of the Atlantic are growing up with "a new education" when it comes to issues of sexual harassment and gender equality.

Still, "women's rights is something we have to defend every day," she said. "It will never end."