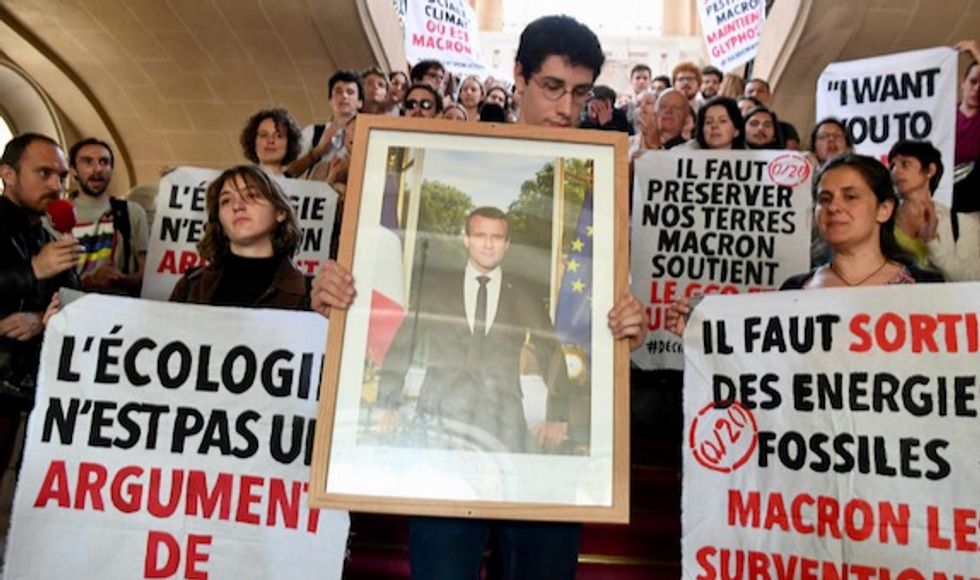 A person shows a portrait of French President Emmanuel Macron he removed from a wall of a town hall in Paris on May 24, 2019.

Green activists will march through the town of Bayonne in the southwest of France on Sunday on the margins of the G7 summit, carrying stolen portraits of French President Emmanuel Macron. But what’s behind one of the G7’s more unusual protests?

As world leaders gather in Biarritz in the French Basque country this weekend for the annual G7 summit, a few miles away in Bayonne French citizens will be marching through the streets, proudly carrying aloft photos of their country’s leader.

But far from a show of support for Macron as he spearheads what is likely to be a fraught and fractious meeting, the march is meant as a stern critique of the president: the photos are stolen and they will be held high not in reverence but defiance.

The protest is the culmination of a months-long civil disobedience movement led by green campaigners and designed to highlight what they say are the gap between Macron’s promises on tackling climate change, and the disappointing reality of his government’s policies.

It began in February, when activists from two groups, ANV-COP 21 and Bizi, marched into town halls in Paris, Lyon, Ustaritz and Biarritz, and walked out again carrying the official portrait of the French president that hangs on walls in public buildings across the country.

The movement, under the banner Décrochons Macron! (Take Down Macron!), soon spread. The activists called for the theft for at least 125 official portraits from town halls before the start of the G7 summit – to match “the 125 days it took France to overtake its annual carbon footprint this year”.

That milestone was reached on July 26 in Espelette, south-west France, where protesters took down a portrait of Macron and replaced it with a poster that read: “Climate, social justice, where is Macron? CETA: no thank you,” in reference to the controversial free trade deal between the EU and Canada.

To date, at least 128 portraits of Macron have been removed from French town halls. Quickly passed on to other activists for safe-keeping, these portraits are now ready to be retrieved from their secret hiding places to go on display in Bayonne on Sunday.

"We wanted to take advantage of the international event that is the G7 to show the gap between the speech of our president on the international stage and the reality in France,” ANV-COP 21 activist Anne-Sophie Trujillo Gauchez explained to French newspaper Le Journal du Dimanche this week.

The blank spaces left where the portraits once hung symbolises “the emptiness of the actual policies of the government in the face of climate and social emergency”, explained another activist, Michel Piquand, to the newspaper.

To casual observers, that Macron’s environmental credentials could spark such ire may be surprising. The French president has presented himself as the great defender of the Paris climate agreement, calling on world leaders to “make our planet great again”. And just this week, Macron led international condemnation of Brazil’s failure to tackle record Amazon wildfires, even threatening to scupper a vital trade deal.

But at home, his policies have failed to live up to the rhetoric, say critics.

In June, a report from France’s independent advisory council on climate found the government was falling behind key emissions-cutting targets, particularly in the transport sector, highlighting what the report called a “gap between ambition and reality”.

The report seemed to justify complaints by Macron’s high-profile former environment minister, Nicolas Hulot, who quit his post last year citing the “accumulation of disappointments” over the inadequacy of steps to tackle climate change.

Symbol of the Republic

Macron can point in his defence to an attempt to hike taxes on fuel to lower emissions, only to abandon the policy after it triggered the vociferous and often violent Yellow Vest protests.

It is perhaps in the context of these protests, whose ferocity came as something of a shock to the French political establishment, that the theft of the portraits has been met with no little indignation from the government and the forces of law and order.

The protesters insist that their movement, unlike that of the Yellow Vests, is completely non-violent. Bizi says the thefts are carried out with “great calm”, the activists making no effort to conceal their identity as they remove the portraits.

Nevertheless, it is part of a growing pattern of direct action in France against the government, which includes the Yellow Vests, and the lines between the movements can sometimes be blurred.

Recent months, for example, have also seen dozens of French MPs’ offices vandalised, mainly by protesters opposed, like the Take Down Macron! movement, to CETA.

At present, 85 activists have been remanded in custody over the thefts of Macron’s portrait, with 45 of them set to stand trial in the coming months, according to ANV-COP 21.

Trujillo Gauchez, who removed a portrait of Macron from the town hall of Jassans-Riottier in the south of France on March 2, is facing up to 10 years in prison and a fine of up to €150,000 for the theft.

If the penalties seem severe, so is some of the rhetoric from politicians. As head of the French Republic, Macron’s official portrait is a symbol of the Republic itself, they argue, and so their theft is nothing short of an attack on the state.

“The deliberate and widely publicised taking down of the portraits of the President of the Republic is a symbolic attack on our democratic institutions and must stop immediately,” said local authorities minister Sébastien Lecornu. “Respect the Republic.”

“You do not undermine the symbols of the Republic,” added economy minister Bruno Le Maire.

But for those who will be on the streets of Bayonne on Sunday, stolen pictures of Macron carried proudly like war spoils, it is clear who the real threat to France, or indeed the world, is.

“We are not leading this action for fun or as a game, we are launching a cry of warning,” said Élodie Nace of ANV-COP21.

“While our planet burns before our eyes, while social inequalities become more and more blatant, the real crime is to congratulate oneself on tiny steps, to be satisfied with statements of intent.”