'This is a huge deal': Majority of House Democrats have signed on to Medicare for All 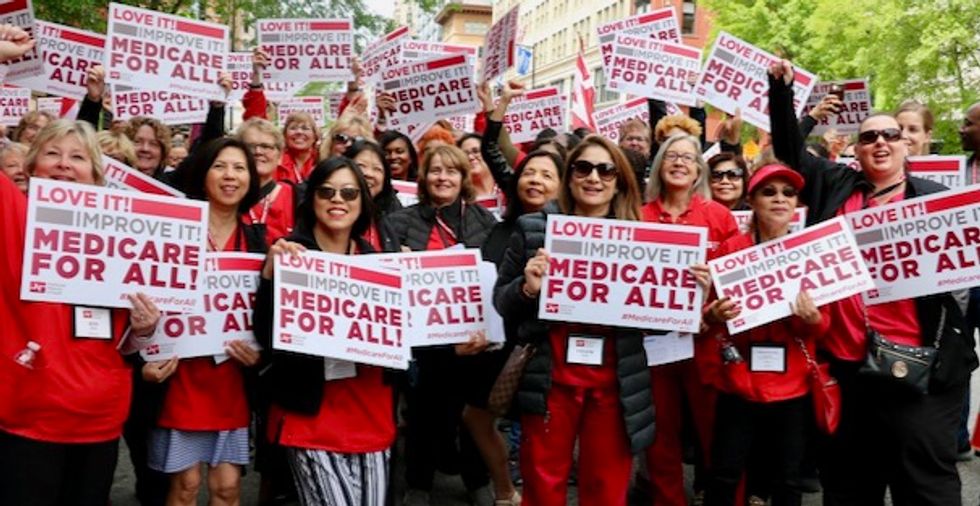 "Amazing what a little bold leadership can do."

Progressives celebrated a "huge landmark" in the fight for a humane healthcare system in the United States after news broke Thursday that a majority of the House Democratic caucus has signed on to the comprehensive and bold Medicare for All Act of 2019.

"Medicare for All is now the official Democratic Party position in the U.S. House, as the legislation now has 118 sponsors—an official majority of the House Democratic caucus," tweeted David Sirota, speechwriter for Sen. Bernie Sanders, a 2020 Democratic presidential candidate and the lead sponsor of the Medicare for All Act in the Senate.

"This is a huge deal," tweeted activist Shaun King.

Single-payer advocates applauded both the persistent grassroots organizing by nurses and others and the leadership of Sanders and Rep. Pramila Jayapal (D-Wash.)—the lead sponsor of the Medicare for All Act in the House—for making the achievement possible.

The milestone comes after Medicare for All featured prominently during both nights of the 2020 Democratic presidential debates in Detroit this week.

Sanders and Sen. Elizabeth Warren (D-Mass.) made forceful arguments in support of Medicare for All in the face of attacks from right-wing Democrats and disingenuous questions by CNN moderators.

In an op-ed for the Washington Post Thursday, Jayapal hit back at Democratic opponents of Medicare for All, accusing them of distorting the facts and "using one-liners from industry front groups and Republican playbooks."

"If we want to achieve true universal healthcare while containing costs. Medicare for All is the only answer."

"As the debates continue, I hope that my fellow Democrats will take a good look at our bill and get the facts right," wrote Jayapal. "The Medicare for All movement has overwhelming public support, unprecedented grassroots organization, and a serious plan that is ready to change our healthcare system right now."

As Common Dreams reported Wednesday, Jayapal expressed her frustration with fellow Democrats who she said are using the Medicare for All label, which has widespread appeal, to push plans that fall far short of the fundamental goals and principles of Medicare for All.

Though she didn't mention Sen. Kamala Harris (D-Calif.) by name, Jayapal's criticism appeared to be directed at the California Democrat's healthcare plan, which would preserve a significant role for private insurance.

"For-profit industry does not have a role in determining one's right to healthcare," Jayapal tweeted. "Anything less is not Medicare for All."

In her Washington Post op-ed, Jayapal also took aim at other half-measures "such as a public option," which "might sound appealing but would still leave more than 10 million people without coverage while keeping in place a costly private-insurance middleman that eats up 25 to 30 percent in administrative waste and profits."

"If we want to achieve true universal healthcare while containing costs," Jayapal wrote, "Medicare for All is the only answer."