'We don't have to live like this': March for Our Lives unveils sweeping plan to address gun violence and strengthen democracy 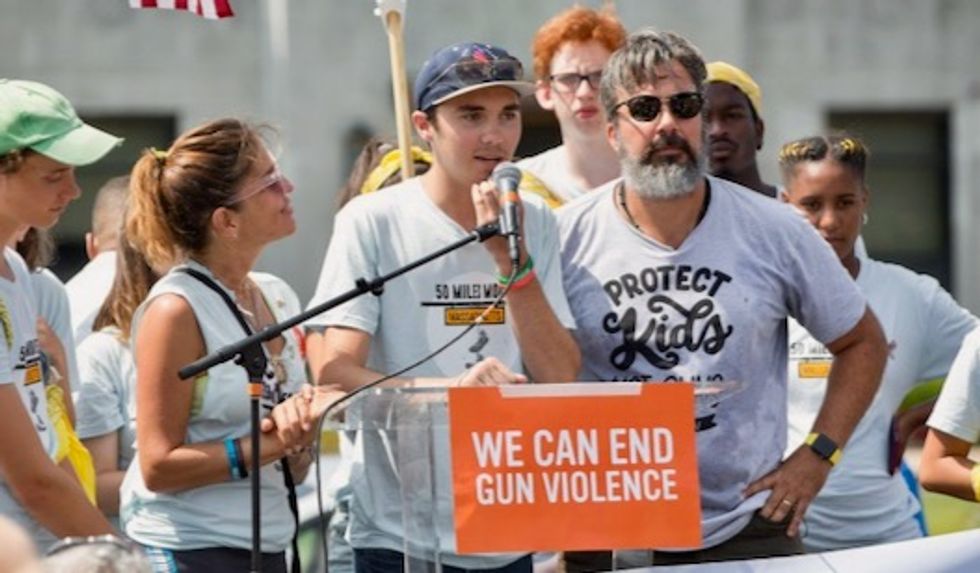 "Created by survivors, so you don't have to be one."

After spending a year and a half traveling the country to register young people to vote and urging high school and college students to participate in the 2020 election, the national organization March For Our Lives released a sweeping gun control proposal Wednesday, calling on the federal government to listen to the demands of young voters.

In its Peace Plan for a Safer America, the group—which was born out of the February 2018 school shooting in Parkland, Florida in which 17 people were killed—calls on the next president to treat the epidemic of gun violence and mass shootings in the U.S. as what it is: "a national public health emergency."

"We have to seismically shift how we respond to gun violence—from inaction to action," said David Hogg, co-founder of the March For Our Lives and a Parkland survivor.

The cover of the plan proclaims it was "created by survivors, so you don't have to be one."

The group released it just weeks after 31 people were killed and more than 50 were injured in mass shootings in Dayton, Ohio and El Paso, Texas.

"We don't have to live like this: in fear for our lives and our families," declares the plan. "The federal government has failed in its responsibility to protect the safety and well-being of the public with regard to the nation's gun violence epidemic. The time for comprehensive and sweeping reform is now."

To curb rampant gun ownership in the U.S., where "there are more guns than people," the six-point peace plan would:

The group claims the restrictions proposed in the plan could cut American gun deaths in half over a decade.

The plan will have a greater chance of being implemented by the federal government if the nation prioritizes voter turnout among young people, March For Our Lives says.

"The next administration must use the full force of the federal government to bring the reckless and irresponsible gun lobby and industry to justice for the irreparable harm they have brought to the American people, beginning with the gun lobby's decades-long campaign to change our interpretation of the Second Amendment."

—Peace Plan for a Safer America

To that end, "we must implement automatic voter registration at the moment that young Americans turn 18 years old," the plan reads.

"What we are seeking to do is be intersectional," Tyah-Amoy Roberts, a Parkland survivor and member of the group's board of directors, told The Washington Post. "We know and acknowledge every day that gun violence prevention is not just about preventing mass shootings."

"The next administration must use the full force of the federal government to bring the reckless and irresponsible gun lobby and industry to justice for the irreparable harm they have brought to the American people, beginning with the gun lobby's decades-long campaign to change our interpretation of the Second Amendment," the plan reads.

Under the plan, the next president's attorney general would be directed to examine the District of Columbia vs. Heller decision, which held that the Second Amendment gives any citizen the right to bear arms unconnected with use in a militia.

The group also advocates for a coordinated effort, modeled on those conservatives have used for years to retain power over the legislative and judicial branches of government, to ensure that the nation's courts are controlled by judges who support broadly popular gun control reforms—in hopes that decisions like Heller will become a thing of the past.

The March For Our Lives called on all presidential candidates in the 2020 election to endorse the Peace Plan.

"We started March For Our Lives to say, 'Not One More,' the group wrote. "No more school shooting drills. No more burying loved ones. No more American exceptionalism in all the wrong ways. But we cannot do this alone. We need leaders—in the White House, in Congress, and on the Supreme Court—who care about the future of our children and our nation."