'Braves' on the frontlines of Hong Kong's protests 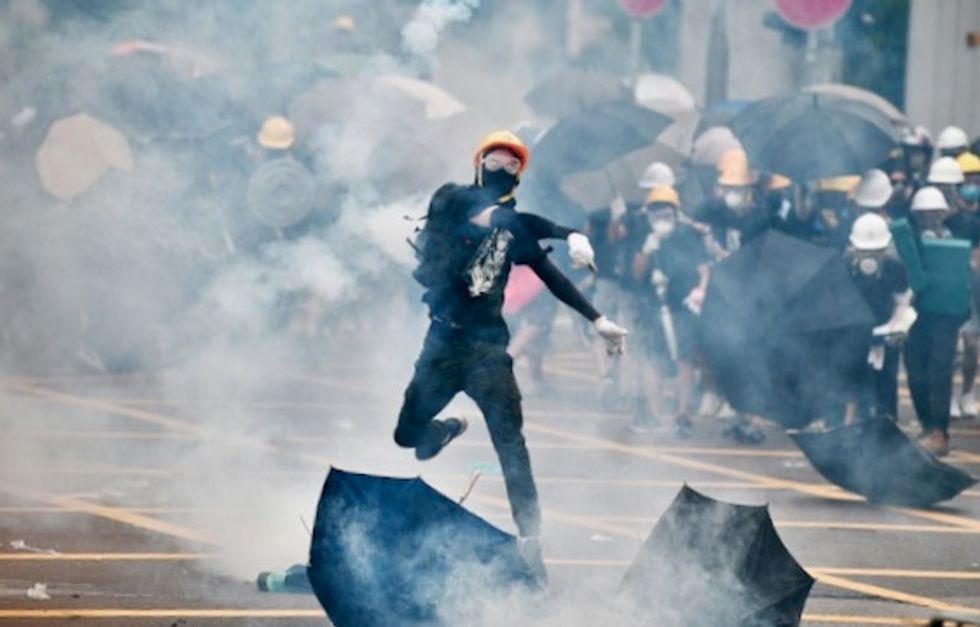 Ryan began the day pretending to his parents that he was off to play football and ended it with a rubber bullet to the leg sustained in clashes with Hong Kong's police.

The 19-year-old bespectacled student is one of what Hong Kong protesters have dubbed "the braves" -- hardline pro-democracy activists who have embraced violence and specialise in fighting police.

Were it not for Hong Kong's summer of rage, Ryan might have been enjoying the holidays and getting ready to start university later this month.

Instead he has spent most of the past 14 weekends on the barricades of the city's huge and sometimes violent anti-government protests, a frontline role he has managed to keep secret from his parents at home.

He joined the protests at the start, initially as a first aider.

But he soon found himself radicalised after police used tear gas and rubber bullets to clear demonstrators outside the city's parliament on June 12.

"When I saw so many companions being hurt and badly battered by the police, I started feel awakened at that moment and thought it was time to do something," he told AFP, in between clashes with police on a recent weekend close to the parliament.

"I am with burning anger," he added. "I want to let the police know that they can't beat us, they can't beat the residents with no consequences. They have to pay the price."

A culture has built up around Hong Kong's "braves" who are hailed by supporters as heroes and reviled by their opponents as nihilists.

Ryan, who declined to give his surname, classifies himself as a "charge boy" -- those tasked with fighting the police.

Protesters who throw petrol bombs are known as "wizards" while teams who extinguish the fizzing tear gas canisters fired at them by police are dubbed "firefighters".

When things are quiet, Ryan explained, his main task is to set up roadblocks and use zip-ties to build barricades.

"But if the police charge forward, I will throw bricks to slow them down. Or if necessary, even fight hand-to-hand with them," he said.

On 31 August -- a day when protesters defied a police ban and marched through the city -- Ryan slipped out of the small flat he lives in with his parents.

He could never tell them he has joined the braves, he explained, because his father is "blue ribbon" -- a staunch supporter of Hong Kong's police and Beijing.

AFP / Lillian SUWANRUMPHA Ryan, a 19-year-old bespectacled student, is one of what Hong Kong protesters have dubbed 'the braves' -- hardline pro-democracy activists

That day's protest turned violent outside the city government's offices and parliament, a frequent flashpoint over the last three months.

Police used water cannon and tear gas to disperse protesters who fought back with slingshots, bricks and Molotov cocktails.

Unlike some of the braves who don reinforced gloves and body armour, Ryan dressed in a simple black T-shirt, saying he preferred to be mobile.

Along with goggles and a gas mask he wore the movement's trademark yellow construction helmet which he had daubed with "Free Hong Kong, Revolution Now" and the dates he had taken to the streets.

Like on previous days, Ryan avoided communicating with fellow protesters, turning up to the gathering on his own.

But once on the streets, he explained, people treat each other as firm friends, united in anonymity by their political convictions.

Using an umbrella to shield himself from rubber bullets and tear gas, Ryan began his offensive by throwing a packet of yellow paint at riot police lined up the other side of a barricade surrounding the government offices.

Next it was a brick he was hurling over the wall.

Then he used his umbrella to shield another protester who lobbed a petrol bomb.

Police fired back with sustained rounds of tear gas, enveloping the chanting crowds with acrid smoke.

"Of course I'm scared and it is a normal feeling," he said. "I believe no one is fearless when they are at the front".

AFP / Lillian SUWANRUMPHA Unlike some of Hong Kong's braves who don reinforced gloves and body armour, Ryan chooses to dress in a simple black T-shirt

The skirmishes went on for much of the afternoon with Ryan and other hardline activists retreating through the city.

Hong Kong's unprecedented protests were sparked by a proposed bill allowing extraditions to the authoritarian mainland.

Opponents saw it was the latest move by Beijing to chip away at the city's unique freedoms.

But as Beijing and city leader Carrie Lam refused to budge the movement morphed into a broader campaign calling for democratic reforms and police accountability.

For months Lam struck a defiant tone and refused to yield to protesters. Then last week she surprised many by announcing she was scrapping the hugely unpopular extradition law.

Protesters across the spectrum dismissed the gesture as too little, too late and have vowed to keep up their campaign.

Among their demands is an amnesty for those arrested, an inquiry into the police and universal suffrage -- all rejected by Lam and Beijing.

Which is why Ryan says he and other braves will keep hitting the streets.

"I want to let the Carrie Lam government know how people urgently desire the five major demands and how people are forced to come out to fight at any cost," he said.

But the risks are high.

Since early June more than 1,100 people have been arrested, many facing riot charges that carry up to 10 years jail.

"I have prepared for arrest," Ryan said, adding he had given his details to a number of close friends.

"If I don't contact them after I go out for a protest, then they will send for legal assistance," he explained.

"It is worth it, to be arrested for my own rights, for the next generation," he said, adding that he still hopes for victory and dreams about one day taking off his mask and getting to know his fellow protesters.

By evening Ryan and other hardline protesters found themselves facing off with riot police in the popular shopping district of Causeway Bay, known for its luxury fashion stores and malls.

Ryan was hit in the thigh by a rubber pellet fired by riot police.

He let out a yelp and fell to the ground before being carried away from the frontlines.

The injury was not serious, but it was painful enough for him to call it a night.

"I must never let my mum know about this," he laughed, before changing into a fresh t-shirt and taking a subway train back home.