How much destruction and death before global climate action is taken? 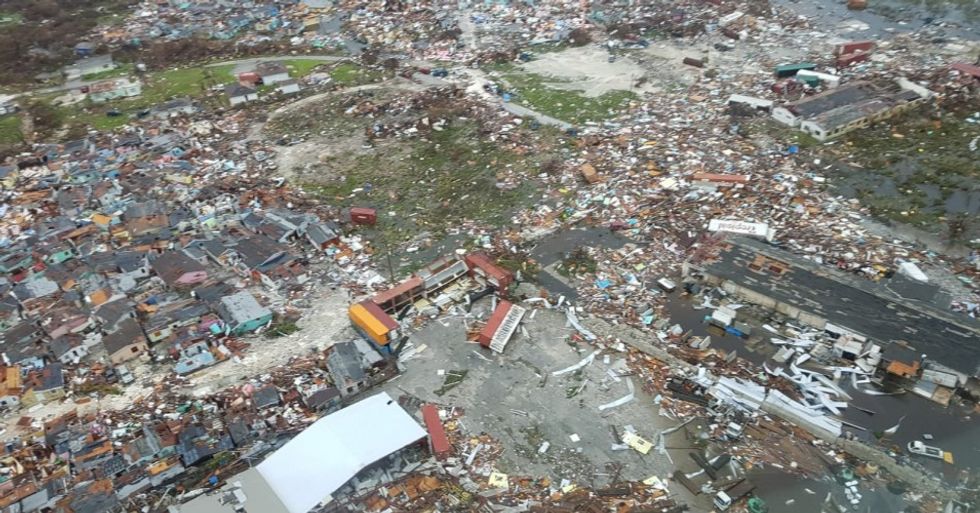 As the National Hurricane Center announced Tuesday that Hurricane Dorian's core was "finally moving away from Grand Bahama Island," toward the Southeastern U.S. coast, footage of the storm's devastation flooded the internet alongside calls for governments and the news media to recognize the here-and-now destruction of the climate emergency.

Through Tuesday evening, the center warned, "dangerous winds and life-threatening storm surge" from Dorian would continue to ravage Grand Bahama—over which the storm stalled Monday after making landfall as a Category 5 hurricane on the Bahamas' Abaco Islands Sunday.

"There's still hurricane-force winds and rain coming down on us, and yet these people are going out and pulling people from their houses, from on top of their houses, and saving their lives," reported CNN's Patrick Oppmann, who is on the ground in the Bahamas.

Climate advocacy groups emphasized the importance of not only aiding those affected by this storm but also of pursuing bolder action to limit rising temperatures that scientists say are making hurricanes more devastating.

This is the destruction that the #ClimateCrisis is bringing, it will only get worse if the inaction continues! We f… https://t.co/eitTLFXJXr
— Zero Hour (@Zero Hour) 1567437383.0

In the Bahamas, as many as 13,000 homes—or nearly half of all houses on the impacted islands—may have been severely damaged or destroyed by Dorian, according to the International Federation of Red Cross and Red Crescent Societies. Flooding on Abaco "is believed to have contaminated wells with saltwater," so some 62,000 people will need access to clean drinking water.

About 45,700 people in Grand Bahama and 14,500 in the Abacos may need food, a spokesman for the U.N. World Food Program told The Associated Press, which reported Tuesday on the region's emerging humanitarian crisis.

He said Tuesday that the storm caused less severe damage in the neighboring Abaco Islands and he hopes to send an advanced medical team there soon.

Sands said the main hospital in Marsh Harbor is intact and sheltering 400 people but needs food, water, medicine, and surgical supplies. He also said crews are trying to airlift between five and seven end-stage kidney failure patients from Abaco who haven't received dialysis since Friday.

Dorian—which is now a Category 2 hurricane hurtling toward Florida—already has killed at least five people in the Bahamas, but given the widespread devastation that has hindered search and rescue operations, the death toll is expected to rise.

"How many more people have to die before political leaders treat climate change like the global catastrophe it is?" Kate Aronoff asked Tuesday in an op-ed for The Guardian.

Aronoff noted the impact of rising temperatures on extreme weather events and that those who have contributed minimally to the global emergency are "among the first and worst hit." Looking toward a future of more devastating storms, Aronoff wrote:

It'll be tempting, as Dorian drifts toward Florida, for observers in the U.S. to forget the death and destruction it has left behind elsewhere. That would be a mistake. Jeff Bezos's escape plans notwithstanding, we're all stuck on this warming planet together. Whether human civilization stays intact amid all this worsening weather depends on recognizing our shared humanity—and designing policy accordingly. Platitudes for the planet won't cut it.

In the op-ed, Aronoff highlighted a couple specific policies that aim to take some responsibility for the outsized role that major developed countries have played in creating the crisis, including the recently released Green New Deal plan from Democratic presidential primary candidate Sen. Bernie Sanders (I-Vt.) as well as a blueprint of a Green New Deal for Europe.

I wrote about Hurricane Dorian and how self-defeating and amoral it is to only think about climate policy within bo… https://t.co/yHe0qfEsZ0
— Kate Aronoff (@Kate Aronoff) 1567519736.0

May Boeve, executive director of the advocacy group 350.org, echoed Aronoff Tuesday in a statement about Dorian and the climate emergency.

The question we are asking is: what will it take to pursue systems-change on the scale that is required in order to defend communities from the reality of climate-fueled disasters? Countries like the Bahamas, where there's never a moment of respite from climate impacts, deserve more than shocked thoughts and prayers.

Boeve warned that "as stronger climate impacts hit coastal regions, we see the most vulnerable communities facing devastating inequities and lacking in resources to evacuate from these storm when necessary."

Highlighting the mass mobilization that climate activists worldwide are planning for Sept. 20, she added that "with each disaster, it becomes ever clearer that we need transformative, bold climate action at scale with the crisis."

"Communities deserve a Green New Deal that invests in resilience and adaptation to climate change, provides funding for disaster relief and grassroots recovery, and creates a just transition to 100 percent renewable economy that creates millions of jobs for workers," said Boeve. "Instead of people, it's fossil fuel billionaires who should pay for the level of damage caused by Hurricane Dorian."