'I'll be back': Schwarzenegger and Hamilton keep promises in new 'Terminator' 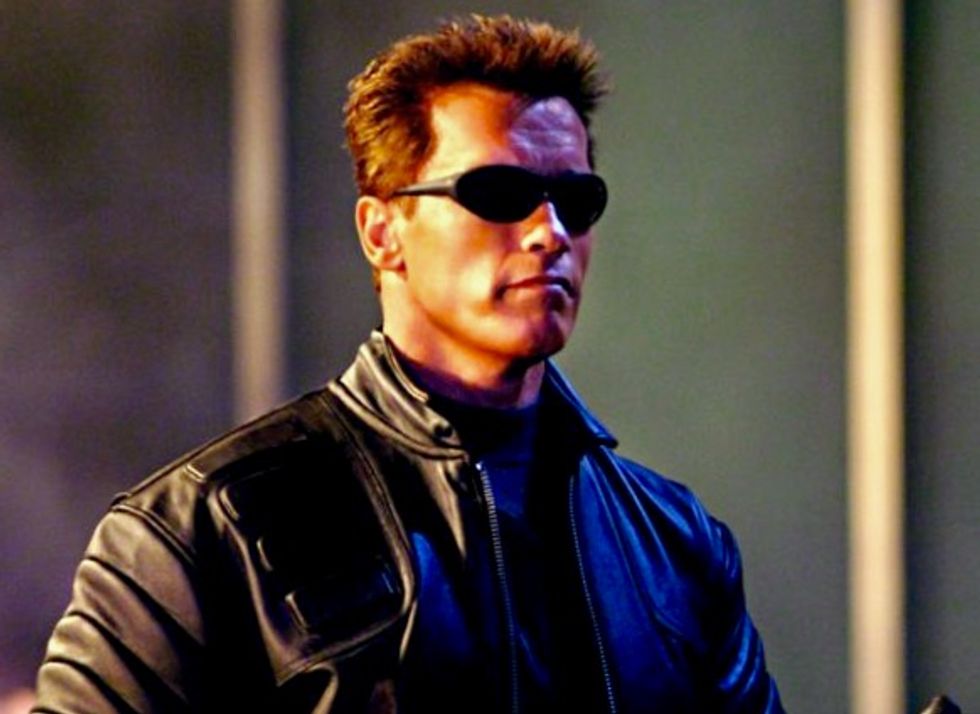 The Terminator has come a long way since Arnold Schwarzenegger first portrayed the cyborg assassin in James Cameron's 1984 sci-fi classic.

"In each movie, the Terminator is a little bit different -- there's a certain evolution," Schwarzenegger told AFP.

But the character's latest incarnation in "Terminator: Dark Fate," out on Friday, still comes as a surprise -- he is now a drapery salesman.

"The first Terminator was just crushing everything and destroying everything. The second one was the protector," said the actor, 72. "Now I have grown a conscience in this one."

But fans can rest assured that, even if he has become more human, the Terminator is a long way from laying down his weapons.

The ingredients that made the original movie and its acclaimed sequel "Terminator 2: Judgment Day" such hits remain in place -- breathless chases, spectacular shoot-outs and fight scenes laden with state-of-the-art special effects.

Glossing over the other, poorly received sequels and spin-offs that came after "T2," the latest film also reconnects with another key element from the first two films -- Linda Hamilton, more angry than ever in her role as Sarah Connor.

Most of the film takes place in 2022, but it begins where "Terminator 2" left off in 1991 -- Connor has just prevented the future eradication of the human race by machines equipped with artificial intelligence known as Skynet.

For Hamilton, the decision to return to this iconic role 28 years later was not an easy one. She told AFP how she had long since built a comfortable life for herself away from big Hollywood productions.

"It took me a long time to agree to do it," she said. "I eventually started going, 'You're just afraid.'

More than letting down the audience, "I was afraid I was going to disappoint Sarah Connor," admitted Hamilton, 63.

"All these years I sort of felt like the first two films were very complete and resisted doing any more, largely because Jim Cameron wasn't involved."

Cameron returns not just as a producer for "Dark Fate" but also participated in writing the script, while Tim Miller ("Deadpool") directs.

Desperate and aimless, "Sarah Connor is no longer human," said Hamilton. "And the Arnold character is more human -- I like that flip."

Anxious not to reveal plot details, Hamilton said that beyond its action scenes, the film -- like its predecessors -- is about "what is it that makes us human."

The film sees Connor find a new raison d'etre in protecting young Dani Ramos (Natalia Reyes), who is being pursued by the most sophisticated-yet Terminator from the future (Gabriel Luna).

A human "augmented" by technology and also sent from the future, played by Mackenzie Davis, is also part of the chase.

For Hamilton, signing back up meant a year of strenuous physical training -- and the even more unpleasant experience of taking testosterone prescribed by her doctor to help her build muscle.

"There came a day where I was angry about something and I couldn't sleep and my blood pressure is spiking and I'm kind of flying off the handle. And, I'm like, 'This is the hormones talking,'" Hamilton recalled.

"If this is what it feels like to be a man, forget it!"

Former "Mr Universe" winner Schwarzenegger, who continues to train every day, had it easier.

"It's not as if I have to start all over again," he told AFP.

For him, the main challenge was acting in front of green screens used to later generate computer-driven special effects.

"It gets a little bit more tedious, because you're now working a lot of times with stuff that doesn't exist," he said. "So when you have a Hummer fly towards you, when you're inside the airplane and you're crashing, it was really never there."

While Schwarzenegger has been repeating "I'll be back" -- his famous line from the original -- since 1984, it is Hamilton who steals the phrase in "Dark Fate." But will either of them sign up for more Terminator films?

"If the fans want to see more of me, they will make the voices be heard... It's kind of like in politics -- the people should decide," joked the former governor of California.

"It depends on how this movie performs -- it's a really very expensive film," said Hamilton, adding that the film was envisioned as the start of a new trilogy.