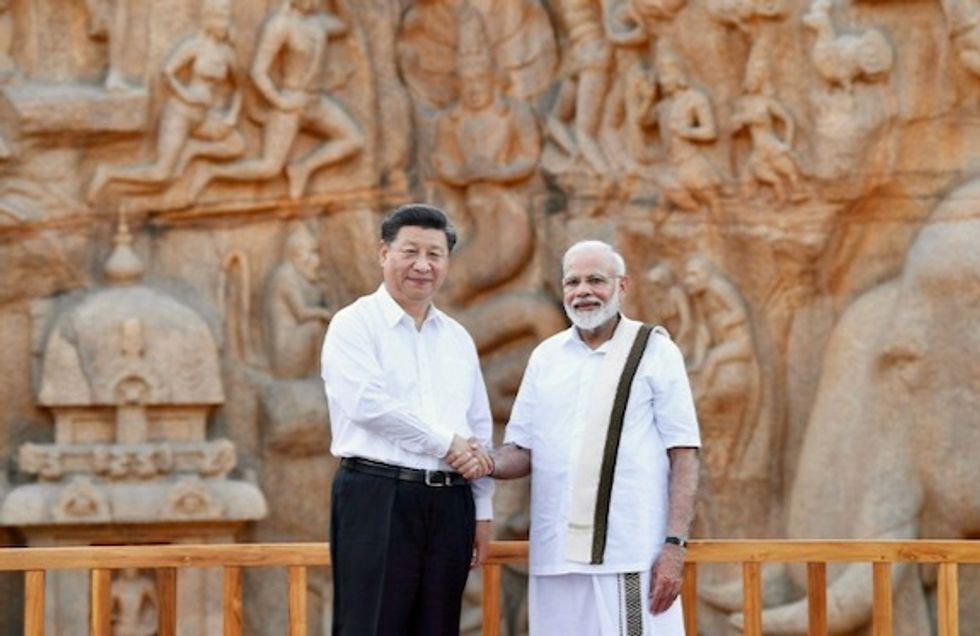 India's Prime Minister Narendra Modi said Saturday that his summit with Chinese leader Xi Xinping would launch a "new era" between the neighbours who are seeking to overcome troublesome differences.

Modi and Xi strolled along a pristine Bay of Bengal beach and held one-on-one talks overlooking the ocean before their delegations sat down to official negotiations at the historic resort town of Mahbalipuram, south of Chennai.

The two leaders are meeting for the second time in a year in a bid to ease tensions over border disputes, the troubled Kashmir region and China's domination of trade between their huge economies.

Modi said a summit in the Chinese city of Wuhan last year "gave increased stability and fresh momentum to our relationship".

"Our Chennai vision today has launched a new era of cooperation between our two countries," he added as he launched the formal talks.

Modi highlighted how the two had agreed last year to "prudently manage our differences and not to allow them to become disputes."

They agreed to "remain sensitive to each other's concerns" so the relationship "will be a source of peace and stability in the world. All these are our big achievements and inspire us to work harder."

Modi did not mention the irritations between the two sides, saying only that he and Xi had "discussed important bilateral and global issues."

The buildup to the summit has been dominated by India's move in August to end the autonomous status of Jammu and Kashmir state.

PIB/AFP / Handout The summit is being held in the southern Indian town of Mahbalipuram, home to a group of 7th and 8th century monuments and carvings which are a UNESCO World Heritage Site

Changes ordered by the New Delhi government will see Kashmir's Ladakh region -- part of which is claimed by Beijing -- turned into a separate Indian administrative territory.

India has moved closer to the United States and its allies in seeking a counter-weight to China's growing military shadow in the Asia-Pacific region.

It has been infuriated by China's diplomatic backing for Pakistan, which controls a large chunk of Muslim-majority Kashmir. The Himalayan region has been a longstanding source of conflict between India and Pakistan.

But at talks on Friday, the leaders acknowledged the common fight against "terrorism", Indian Foreign Secretary Vijay Gokhale said.

Modi and Xi said "that radicalisation was a matter of concern to both, and that both would work together to see that radicalisation and terrorism did not affect the fabric of our multicultural, multi-ethnic, multi-religious societies", Gokhale told reporters.

China made no immediate comment on the summit. But the official Xinhua news agency said Xi received a "warm welcome" from Modi and they agreed their countries "should respect and learn from each other so as to jointly achieve common development and prosperity."

Modern rivalry between India and China -- which each have populations of more than 1.3 billion people -- dates back decades.

They went to war in 1962 over disputed Himalayan territory and other border standoffs remain.

PIB/AFP / Handout The two leaders are meeting for the second time in a year in a bid to ease tensions over border disputes, the troubled Kashmir region and China's domination of trade between their huge economies

The Dalai Lama, the Tibetan spiritual leader and long an aggravation for China, is based at Dharamsala in northern India.

When Xi said he supports Pakistan's "legitimate rights", India's foreign ministry thundered that it was "not for other countries to comment on the internal affairs of India".

On commerce, India and China are both facing a protectionist US and want greater access to each other's markets. India in particular is concerned by China's $57 billion surplus in their joint trade.

Gokhale said the leaders talked about enhancing trade and investment, "and this also obviously included the issue of the trade deficit".

China in turn wants India to ignore Western security concerns on telecoms giant Huawei -- already a big player in the Indian mobile sector -- so that it can be a key part of India's transformation to 5G communications.

Huawei's "contribution to India's economic and social development is obvious to all," China's foreign ministry said this week, calling on India to make "independent and objective judgments and decisions".