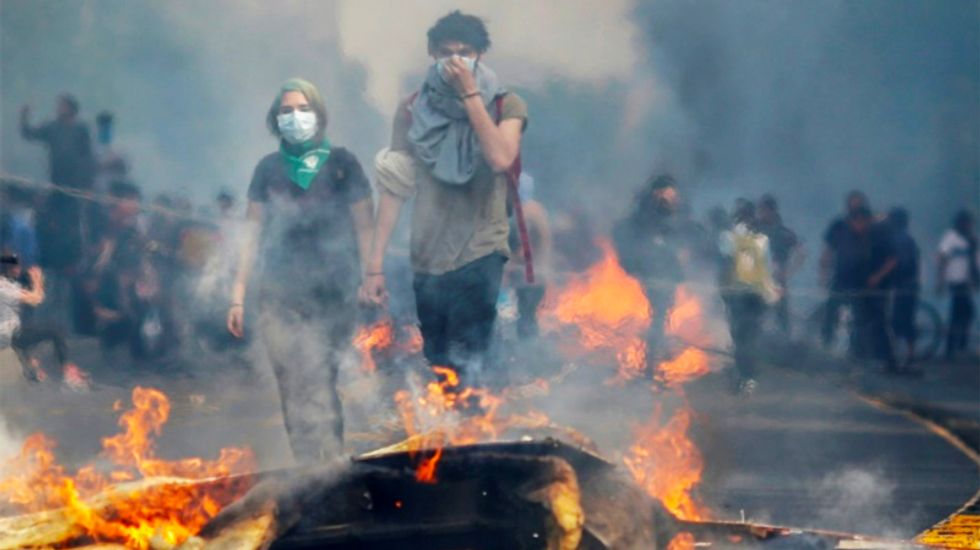 AFP / Pablo VERA Two days of violent unrest in Santiago have seen metros and buses burned, and clashes between riot police and protesters

Three people died in a fire in a supermarket being ransacked in the Chilean capital early Sunday, as protests sparked by anger over social and economic conditions rocked one of Latin America's most stable countries.

Santiago's Mayor Karla Rubilar told reporters two people burned to death in the blaze and another later died in hospital, after the huge store controlled by US retail chain Walmart was looted.

They were the first deaths in two days of violent unrest in which protesters have set buses on fire, burned metro stations and clashed with riot police in the city of seven million -- despite a curfew imposed overnight until 07:00 Sunday.

Soldiers were deployed in the streets for the first time since Chile returned to democracy in 1990, following the rightwing Augusto Pinochet dictatorship.

The protests were triggered by an unpopular hike in metro fares, which President Sebastian Pinera announced Saturday he was suspending.

Pinera appealed to people taking to the streets, saying "there are good reasons to do so," but calling on them "to demonstrate peacefully."

"Nobody has the right to act with brutal criminal violence," he said.

But clashes later erupted in Plaza Italia, ground zero of Friday's violence, and outside the presidential palace.

Protesters again set buses on fire in downtown Santiago, leading to the suspension of services.

"We're sick and tired, enough already. We're tired of them screwing around with us. Politicians only do what they want to do, and turn their backs on all reality," said Javiera Alarcon, a 29-year-old sociologist protesting in front of the presidential palace, which was surrounded by police and military vehicles.

"Having analyzed the situation and the appalling actions that occurred today, I have made the decision to suspend freedoms and movement through a total curfew," said Army General Javier Iturriaga, who is overseeing security during the state of emergency.

Later on Saturday, the mayors of Valparaiso region and Concepcion province also announced states of emergency.

Dozens of protesters torched a building belonging to Chile's oldest newspaper El Mercurio in Valparaiso city on Saturday evening, while elsewhere in the port city a metro station, supermarkets and other stores were burned.

Pinera announced Saturday he was suspending the fare hike, after the entire metro system was shut down the day prior with protesters burning and vandalizing dozens of stations, leaving some completely charred.

The Santiago Metro, at 140 kilometres (90 miles), is the largest and most modern in South America and a source of great pride for Chileans.

Demonstrators shouted "enough with abuse," while the hashtag #ChileDesperto -- Chile awake -- made the rounds on social media.

Pinera's conservative government has been caught flat-footed by the worst social upheaval in decades.

It declared the state of emergency late Friday and ordered hundreds of troops into the streets.

People were infuriated by a photo of Pinera eating pizza in a restaurant with his family while the city burned.

Throughout Friday, rampaging protesters clashed with riot police in several parts of the capital while the headquarters of the ENEL Chile power company and a Banco Chile branch -- both in the city center -- were set on fire and heavily damaged.

The state of emergency is initially set for 15 days and restricts freedom of movement and assembly.

The unrest started as a fare-dodging protest mainly by students against the hike in metro ticket prices, blamed on rising oil prices and a weaker peso.

There had been several fare-dodging actions in recent days, organized on social media, but the protests escalated Friday, tapping into general discontent among many Chileans.

Chile has the highest per capita income of Latin America at $20,000, with expected economic growth this year of 2.5 percent and just two percent inflation.

But there is an undercurrent of frustration with rising health care and utility costs, low pensions and social inequality.

The metro fare hike served to wake up a society that was averse to violence after the horrors of the Pinochet dictatorship from 1973-1990, which left more than 3,200 people dead or missing, sociologists say.