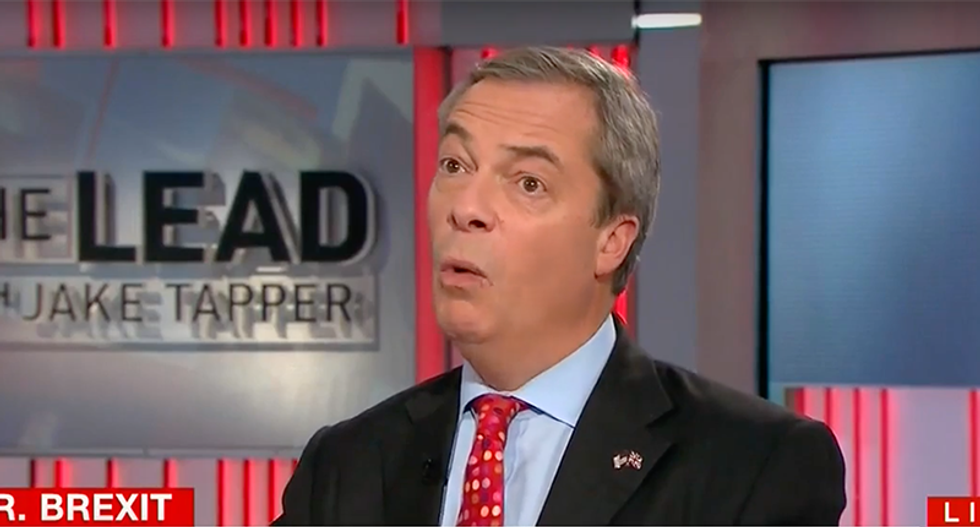 Populist Brexit Party leader Nigel Farage on Monday withdrew his threat to challenge the governing Conservatives at every seat in next month's election, in a boost for Prime Minister Boris Johnson.

Farage, a leading force behind the 2016 referendum vote to leave the European Union, had faced criticism that he risked splitting the eurosceptic vote on December 12.

Instead, he promised to focus on seats held by the main opposition Labour party which voted "Leave" -- although this could still see him take votes from Johnson's Tories.

"The Brexit Party will not contest the 317 seats the Conservatives won at the last election," Farage said on the campaign trail in Hartlepool, northeast England.

The former leader of the UK Independence Party (UKIP) had earlier promised to field 600 candidates unless Johnson agreed to abandon the exit terms he agreed with Brussels.

Farage said the deal, which has yet to be ratified by parliament, would deliver "Brexit in name only".

But the prime minister refused and Farage has now given in, noting wryly: "In a sense we now have a Leave alliance, it's just that we've done it unilaterally."

Ignoring Tory-held seats, he promised to target Labour areas which voted for Brexit, seeking to capitalize on disillusionment with the opposition party's stance.

Labour has promised a second referendum on Brexit, a call backed by many smaller parties in the House of Commons, with the option that it could campaign to stay in the EU.

Farage said his decision "prevents a second referendum from happening. And that to me, I think right now, is the single most important thing in our country".

Johnson welcomed the move, saying: "I'm glad that there's a recognition that there's only one way to get Brexit done and that's to vote for the Conservatives."

Farage was speaking as he campaigned in Hartlepool, a long-time Labour area which voted by 64 percent to leave the European Union in 2016.

But Pat Stamper, 81, a former Labour voter attending the Brexit Party rally, told AFP: "I'm with Nigel all the way. It’s the only way to get out of the EU."

Sara Hobolt, a political expert at the London School of Economics, said the decision was a boost for Johnson, tweeting: "This makes a Tory majority much more likely."

The Conservatives won 317 out of 650 seats at the 2017 election but they go into next month's vote defending only 298, after some MPs were expelled and others defected over disagreements over Brexit.

Farage's decision could help them keep the most marginal of these seats.

But they are not enough to govern and could see them scrabble to forge parliamentary alliances with smaller parties.

After 2017, the party had to form an alliance with Northern Ireland's Democratic Unionist Party (DUP) to stay in power.

Johnson is aiming for Labour-held seats to boost his numbers and in this, will still be up against Farage.

In areas where Labour and the anti-Brexit Liberal Democrats are strong, the Brexit party "is more likely to take votes from the Conservatives than Labour," said Tim Bale, from Queen Mary University of London.

Labour accused Farage and Johnson of cooking up an alliance that threatened to "sell out our country" and pave the way for a post-Brexit trade deal that would open the state-run health service to US drugs firms.

"We urge voters to reject this Thatcherite 1980s tribute act, which would lead to more savage Tory attacks on working class communities," said Labour chairman Ian Lavery in a statement.

There's a big problem with religious exemptions from vaccines

The anti-vaxx protest government mandates is in full swing, fueled, and amped by non-stop support from right-leaning commentators and celebrities, various evangelical ministers and what look to be lawsuits by the basketful.

Curiously, the goals of protest seem aimed both at allowing for individual "choice" over mandates, and, well, mandating that the executive orders themselves be declared unconstitutional. Choice for me, no choice for Joe Biden.

Want to know who owns your member of Congress? Just look at how they vote.

For example, this week Representatives Kurt Schrader (D-OR), Scott Peters (D-CA), Kathleen Rice (D-NY) and, on another committee, Stephanie Murphy (D-Fla.) all voted with 100% of their Republican colleagues to kill the ability of Medicare to negotiate drug prices.