Atlantic haven is a test bed for planet's sickly oceans 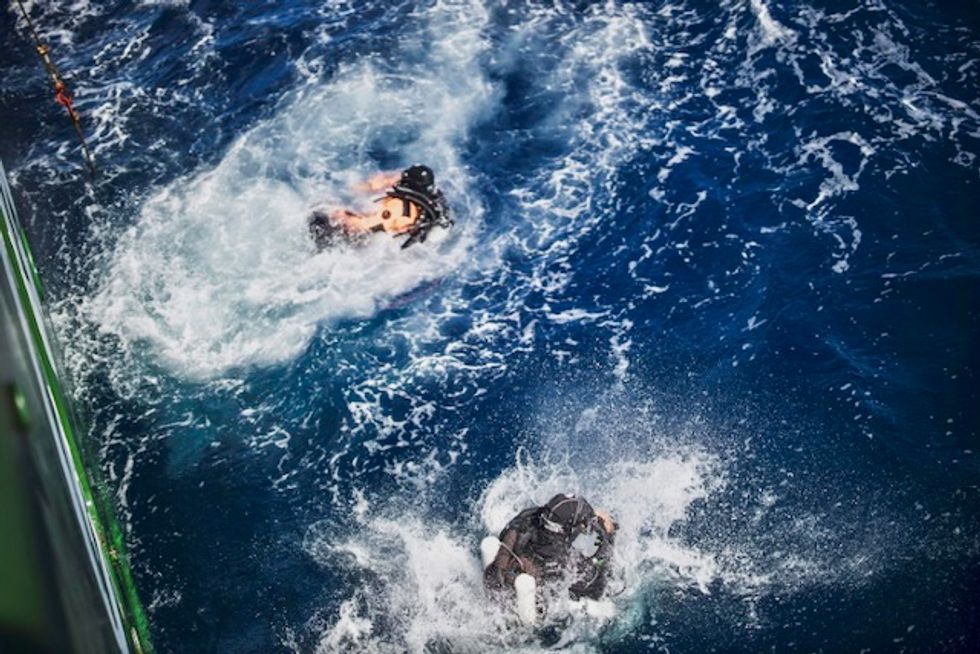 Clad in diving gear or oilskins and gumboots, a team of scientists and activists spent weeks in the South Atlantic, enduring storms and choppy seas to check up on a place almost no-one has heard of.

Their mission: To monitor an underwater mountain for clues of global warming and plastic pollution -- and vet the impact of a 12-year-old ban on trawling.

Researchers with Greenpeace sailed a thousand kilometers (600 miles) northwest of Cape Town to Vema Seamount, one of the most remarkable, yet poorly-known, features of the Blue Planet.

The volcanic mountain rises a colossal 4,600 meters (15,000 feet) from the ocean abyss -- almost as high as Mont Blanc, the highest point in Europe.

Its conical peak, eroded to a flat top by waves over thousands of years, reaches to just 26 meters (85 feet) from the surface.

AFP journalists joined the 30 crew, scientists and campaigners for 10 days of their three-week long exploration.

Aboard the research ship Arctic Sunrise, specialist divers shared jokes as they put on bright orange and black dry suits, strapped on air cylinders and ran through final checks of high-resolution cameras.

They jumped out through the pilot door, disappearing in the deep blue waters for about 45 minutes -- a twice-a-day ritual, weather permitting.

Below the waves, the divers took samples and recorded an inventory of sea life.

Vema is an ocean oasis -- its shallow summit is bathed in sunlight, enabling algae, kelp and black coral to grow, which in turn draw fish and crustaceans.

"There were lots of fish around us, just swimming around us, in a big circle. It was absolutely awesome to see. Beautiful!" said Dutch diver Sander Jansson.

AFP / MARCO LONGARI Marine biologist Thilo Maack briefs the Greenpeace team about the Vema Seamount. The area seems to be recovering from overfishing, but like seas everywhere is being hit by global warming

Vema -- named after a vessel which discovered it in the 1950s -- lies in international waters.

Little more than one percent of ocean areas lying outside national jurisdictions benefit from some form of international protection, according to the UN's Ocean Action website.

Vema is fortunate to be one of the very few areas of the deep seas that enjoys such a shield.

In 2007, an intergovernmental fisheries science and management body, the South East Atlantic Fisheries Organisation (SEAFO) banned bottom trawling on Vema and other seamounts.

Some of the species at Vema have clearly flourished since then.

"There is so much life down there," said marine biologist and expedition leader Thilo Maack.

He added: "This is just a perfect example of what happens if we leave nature on its own for a certain period of time even if it was overfished, it will replenish".

The sunnier outlook even extends to the Tristan rock lobster -- a species that was twice driven to near-extinction to meet seafood demand in East Asia.

"Who says there are no lobsters down there?" quipped German diver Pascal van Erp as he stepped back on deck after his first dive.

When the current was too strong for divers to go into the water, the researchers launched an underwater drone and sat inside a blue shipping container on the ship's deck, monitoring screens sending back video footage.

Marine conservation organisations are pushing for ocean havens to be vastly expanded.

Greenpeace has mounted a pole-to-pole Arctic-to-Antarctic expedition to lobby the UN to come up with an international legally-binding treaty that protect at least 30 percent of the world's deep oceans from human activities and industrial fishing by 2030.

The UN is negotiating new policies and these which should be finalised at a global conference early next year.

Francois Engelbrecht, professor of climatology at South Africa's University of the Witswatersrand, said the plight of the oceans was like the fight against climate change -- both had to be addressed at a planetary level.

"The entire Earth system is connected, it is a coupled system, and changes in one part of the world sooner or later affect many other parts of the world," he said.

"So the international efforts to protect the oceans and to mitigate climate change are in fact an effort that requires tremendous international cooperation."

The oceans play a vital role in the grim calculus of global warming.

They are, at the same time, a shield against warming, a future accelerator of it and a victim of it.

By absorbing a quarter of manmade carbon dioxide (CO2) and more than 90 percent of the heat generated by greenhouse gases, oceans avoid huge amounts of atmospheric warming, says the UN's top scientific panel, the Intergovernmental Panel for Climate Change (IPCC).

But warmer oceans means rising sea levels, as well as stored heat that will ultimately be released to the atmosphere -- climate-altering mechanisms that may function for centuries to come.

"A breakdown in climate will ultimately impact on our oceans," Bukelwa Nzimande, 29, a South African activist.

"They act as carbon sinks, they hold lots of wildlife which captures the carbon, at the same time they absorb excess heat that would ideally be felt by us as humanity."

Higher sea temperatures and acidification caused by CO2 absorption are widely feared because of their impact on marine biodiversity, although this remains poorly understood.

One of the tasks at Vema was to look for evidence of whale migration and compare that with past years.

By comparing patterns of migration times, scientist hoped to make deductions over any changes to currents and feeding grounds.

Another priority was to look for discarded plastic, which is emerging as one of the biggest threats to marine wildlife.

Plastic bags can be swallowed by marine mammals, and small species absorb minute plastic particles that then accumulate up the food chain.

The UN estimates that 640,000 tonnes of fishing equipment is discarded around the oceans each year.

Despite the general pristine state of Vema and the ban on fishing, there was evidence that fishing had taken place at Vema.

There were more than 30 crew, scientists and activists aboard the Arctic Sunrise, a 45-metre (147-feet) Norwegian-built ice breaker.

They hailed from South Africa, Germany, Netherlands, Belgium and Britain, among other nations.

They shared small cabins equiped with bunk beds, complete with guard rails for the stormy days when the ship swayed violently from side to side.

"Even if my employer today says there's no more money to pay me a salary, I will continue doing what I'm doing," said deckhand Barry Joubert,39, who quit his job at a game reserve in Parys, South Africa five years ago to join Greenpeace.

South African-born captain Mike Fincken, 55, spends six months of the year away from his seven-year-old son in Wales.

One of his deck assistants is Tuleka Zuma, a 31-year-old mother of an 18-month-old toddler back in South Africa's southeastern KwaZulu-Natal province.

Celine Desvachez, a 27-year-old Belgian boat pilot, said she cannot "find any meaningful way of living my life" other than doing what she did.

"Actually my personal battle is when I go off the ship," she said.