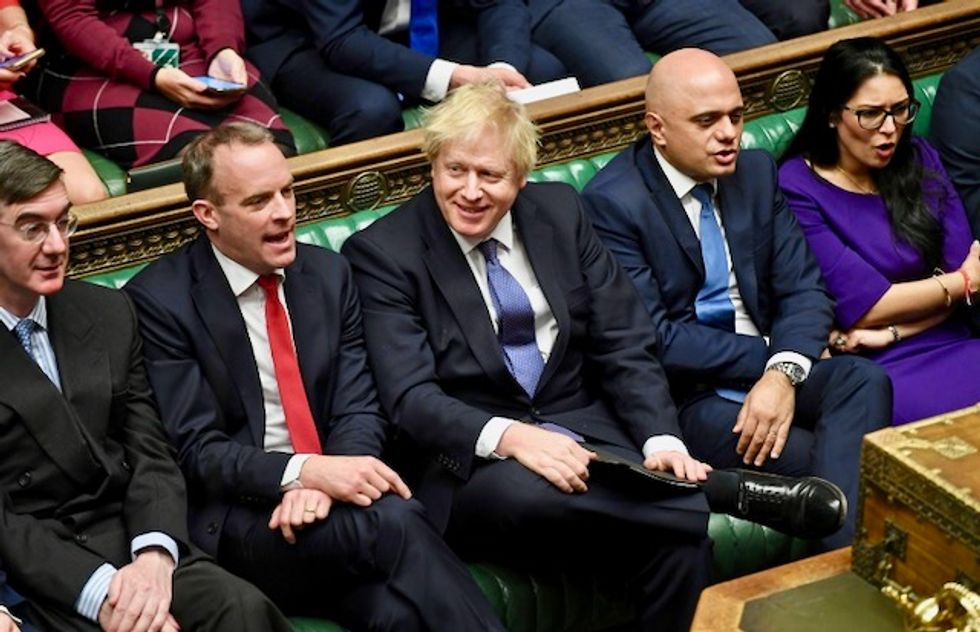 Britain's new parliament on Friday gave its initial approval to a revised EU divorce deal that sets up a high-stakes clash with Brussels over their future ties.

The 358 to 234 vote paves the way for Prime Minister Boris Johnson to deliver on his winning general election promise to "get Brexit done" by January 31.

But it also pushes Britain and the remaining 27 European Union member states closer to another cliff edge that could end decades of unfettered trade when the post-Brexit transition period shuts at the end of 2020.

The main opposition Labour party -- out of power since 2010 and riven by internal conflicts over Britain's place in the world -- was relegated to its worst defeat since 1935.

Johnson's triumph dispelled any doubts over whether Britain would follow through on the results of its 2016 referendum and become the first nation to leave the bloc.

It has been a rocky 47-year sojourn that saw Brussels and London wrangle over currency controls and whose laws take precedence in specific fields.

The 2016 Brexit campaign was also dominated by debates over migrants and Britain's right to control its own border.

"We are one step closer to getting Brexit done," Johnson tweeted after the vote.

The House of Commons is expected to formally approve Johnson's separation terms on January 9.

Yet Britain remains a politically divided country in which debates over Europe rage on.

Labour leader Jeremy Corbyn is stepping down in the wake of the election fiasco.

But he told parliament ahead of Friday's vote that Johnson was setting the country on a "reckless direction" that handed power to big business and risked consumers' health.

"We still believe it's a terrible deal," Corbyn said.

"Given the chance, they'll slash food standards to match those in the United States, where what are called 'acceptable levels' of rat hairs in paprika and rat hairs in orange juice are allowed," he said.

Blackford warned that Britain was now "blindly hurtling towards the cliff-edge" that would "cost thousands of jobs in Scotland".

"This UK government cannot drag Scotland out of the European Union before gaining the legislative consent of the Scottish parliament," he said.

The SNP's independence drive is likely to remain a concern for Johnson's government in the months to come.

Businesses and investors are also worried about a series of small but potentially consequential changes into the official Withdrawal Agreement Bill.

Britain's formal departure on January 31 is due to be followed by an 11-month transition period during which things are to stay pretty much as now.

London and Brussels are supposed to use the time to negotiate a comprehensive new agreement covering everything from trade to security and data protection.

EU officials warn that such deals usually take years to hammer out.

But Johnson ruled out the possibility of asking for a deadline extension in the version of the bill before parliament on Friday.

"A Minister of the Crown may not agree... to an extension of the implementation period," the bill now says.

It puts psychological pressure on European officials to back off some of their stiffer demands on London and seek a limited deal that leaves some big issues unresolved.

Welsh nationalist MP Jonathan Edwards told Johnson he had "boxed himself into a corner" by ruling out an extension.

But the prime minister said the lesson of Brexit talks thus far -- the departure date was delayed three times from March 29 -- was that a firm deadline "strengthens our negotiating position".

The EU's chief Brexit negotiator Michel Barnier said on Tuesday that the bloc "will do the maximum" to meet the end-of-2020 deadline.