Italy to ‘close down all productive activity’ -- except for ‘indispensable’ factories 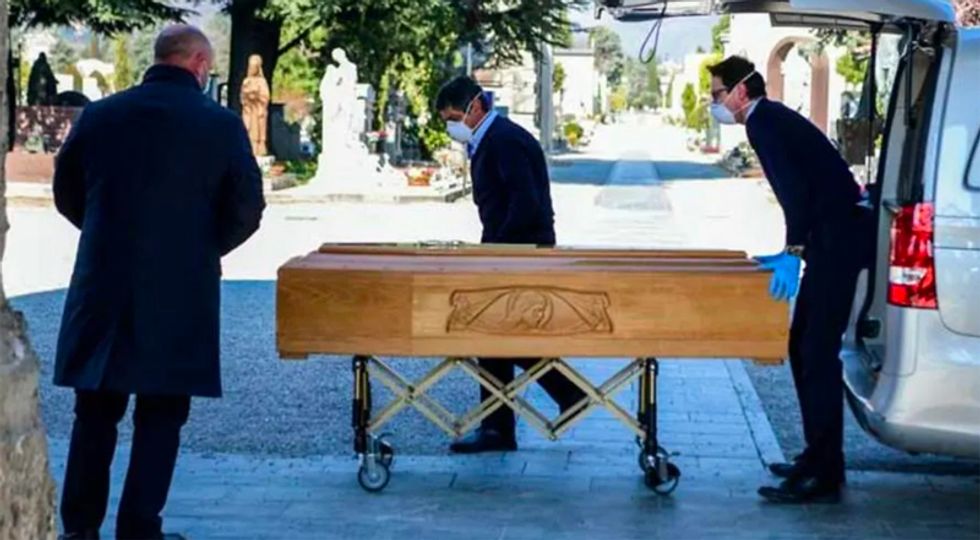 Undertakers wearing face masks unload a coffin out of a hearse at the Monumental cemetery of Bergamo, Lombardy, in Italy. Piero Cruciatti/AFP

Italy on Saturday shut all non-essential factories after recording another record coronavirus toll that brought its fatalities to 4,825 -- over a third of the world's total and a grim reminder that the pandemic remains out of control.

"The decision taken by the government is to close down all productive activity throughout the territory that is not strictly necessary, crucial, indispensable, to guarantee us essential goods and services," Prime Minister Giuseppe Conte said in a dramatic late-night TV address.

The 55-year-old Italian leader stressed that groceries and pharmacies would remain open and did not spell out what "indispensable" companies were.

"We will slow down the country's productive engine, but we will not stop it," Conte said.

Italy has notched a rapid succession of records that seemed unimaginable when a retired Italian builder became the first person in Europe to die of the new illness exactly a month ago.

The Mediterranean nation of 60 million on Thursday overtook China as the global epicentre of COVID-19.

It then registered another 1,420 deaths on Friday and Saturday that took its total higher than that reported by China and third-placed Iran combined.

Medical experts question Iran's transparency and speculate that its toll might be higher.

Italian health officials looked stony-faced as they read out the latest bad news in a daily update on the country's deadliest and most transformative crisis since World War II.

National Health Institute (ISS) chief Silvio Brusaferro urged the elderly to stay in doors at all times because the average age of Italy's victims was 78.5.

"If you do not follow all the (government) measures, you make everything more difficult," Italy's top medical expert said.

"If you do, we can make this outbreak slow down."

But the Italian government appears intent on making more or less everyone stay in doors as much as possible at any cost.

Police squads in Rome were checking documents and fining those outside without a valid excuse.

Those who were out shopping were forced to wait in line at the entrance to make sure the store was filled with only a handful of people at a time.

Those who were out jogging were asked to limit their runs to laps around the block.

And those who were out for a walk were fined if they broke the rules and wondered into a park or stopped to take pictures of historic scenes of a city without any people.

Conte's government is betting that this approach -- and its accompanying concession that the economy will suffer extraordinary short-term pain -- will ultimately prevail.

The problem for Conte is that it is not working yet.

This is yet another record that beat one set only the day before.

Italy's first weeks of the crisis were marked by periodic record death tolls that would come twice or three times a week.

The country has been setting them every day since Wednesday and the jumps are getting exponentially bigger.

The total number of fatalities in the northern Lombardy regions around Milan surpassed 3,000.

Lombardy has been under a lockdown since March 8 and the government had hoped to see results there first.

"The situation is getting worse," Lombardy governor Attilio Fontana was quoted as saying late Saturday by Italy's Sky TG24.

Italian media said Fontana was planing a new wave of closures and restrictions starting Sunday that included a ban on jogging and other outdoor activities.