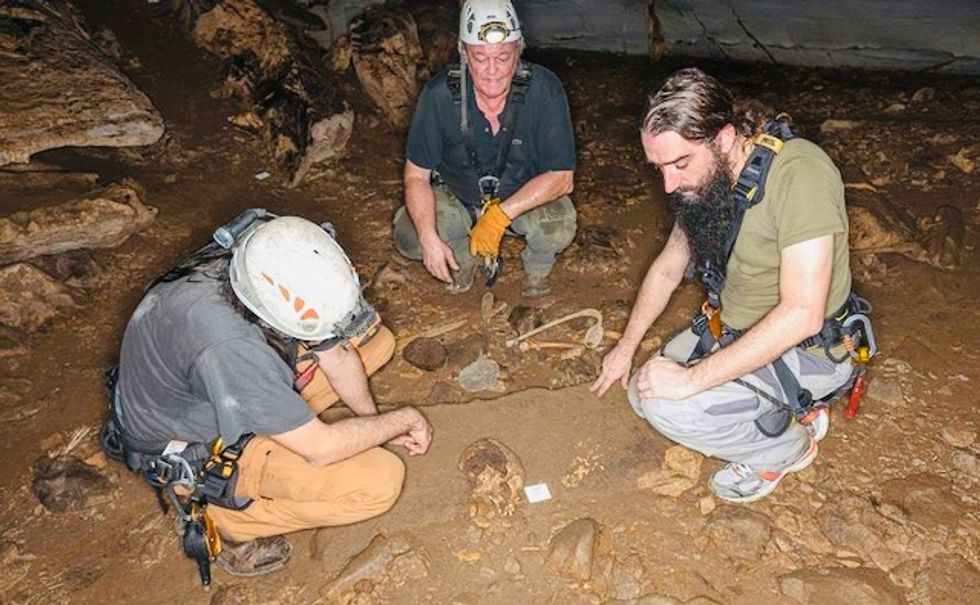 The discovery of a 14th century underground burial site deep in Gabon's tropical forest may shed light on a little known period in Africa's history.

Hundreds of mediaeval artefacts are scattered with human remains at the bottom of a cave in the southeast of the country, discovered by a French geo-archaeologist in 2018.

"This is a unique discovery in Africa, because human remains are almost non-existent," said Richard Oslisly, leading an expedition financed by the National Agency of National Parks.

The mission is also funded by the local environmental branch of Singapore's palm oil giant Olam International, which is well established in Gabon.

There are no golden platters or diamonds at the end of the 25 metres (82 feet) of rope needed to reach the floor of the cave, but the site named Iroungou is still a treasure trove for scientists.

Almost 30 skeletons have been discovered on three levels, with more than 500 metallic artefacts made mostly of iron and ranging from knives, axes and spear tips to bracelets and collars. Researchers also found 39 pierced teeth from hyenas and panthers.

Oslisly, 69, only began to speak of the discovery a year afterwards, but it has caused a wave of excitement and hope in the regional scientific community.

"This cave will enable us to find out a little more about these peoples of central Africa, largely unrecorded in history," the French researcher said in his Libreville office, full of local antiquities.

In sub-Saharan Africa, "soils are very acidic, so everything of human and animal origin decomposes very quickly," said Geoffroy de Saulieu, an archaeologist with France's Research Institute for Development (IRD).

"It is exceptional to obtain this kind of remains."

With carbon-14 dating practised on 10 femurs -- or thighbones -- it was possible to date the skeletons in the cave in the 14th century, a worthwhile discovery in itself.

In this part of the world, vestiges of the past are unusual, but that is also partly because archaeological research is generally insufficiently funded and comes late in the day.

The first written texts regarding Gabon came from European adventurers who landed on its Atlantic Coast at the end of the 15th century.

It was not until the 19th century that explorers ventured far inland on territory almost completely covered with forest.

The oral record of indigenous clans and families handed down in villages "doesn't let us go back further than one or two centuries," said Louis Perrois, a French anthropologist who has studied oral tradition in much of Gabon since the 1960s.

When researchers questioned the elders in villages around the Iroungou cave, nobody was aware of the existence of the site. The villagers said they had no idea who the men and women buried there could be.

Molar teeth extracted from skulls have been sent to France for DNA testing. Scientists can also count on a DNA base compiled with saliva data from peoples across central Africa.

Oslisly hopes to "cross-check the data and, perhaps, to find the descendants of these skeletons," with the DNA tools used by linguists.

In March, a team of anthropologists and specialists in bone pathology -- people with skills to diagnose illnesses from remains -- were due to go down into the cave.

"We're going to find out more about the diet of the buried people, and the illnesses they have contracted during their lives," says Oslisly, still enthusiastic after 35 years of work in Gabon and Cameroon.

"Above all, we're going to learn what they died of," he added.

Apart from a collective burial site unearthed at Benin City in southern Nigeria in the 1960s, Iroungou is the only cave grave to be found in Africa.

Like the Iroungou skeletons, the bones in Benin City have been dated to the 14th century, an epoch which witnessed the fall of many African civilisations, according to several historians.

Some researchers wonder whether Africa was struck by the Great Plague, over the same decades as it ravaged Europe and Asia. Maybe the Iroungou bones hold an answer.

"In Benin City, the ADN was not saved, but in Iroungou the bones are in very good shape," de Saulieu says.