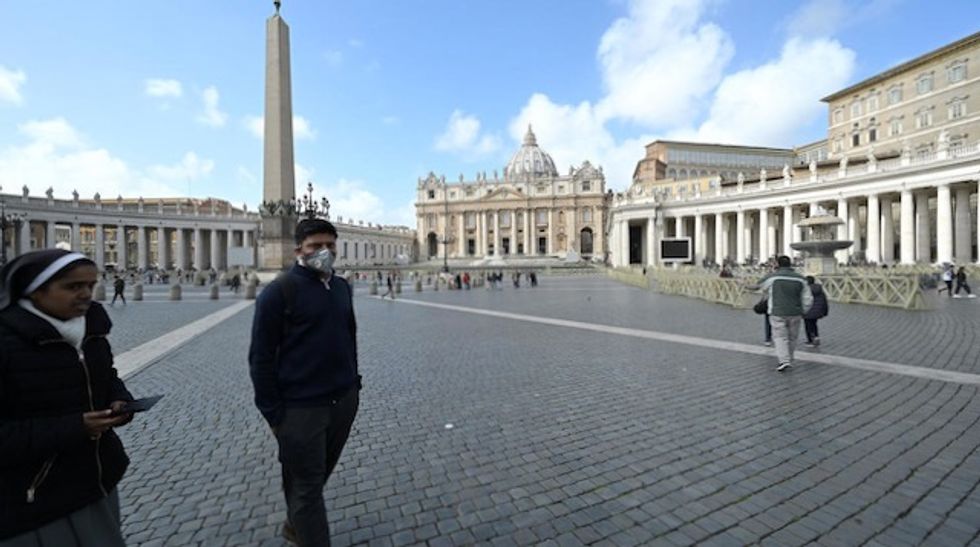 The Vatican on Friday reported its first coronavirus case and closed some offices to protect hundreds of the micro-state's priests and residents as the virus rages across surrounding Italy.

The confirmed case prompted a sympathetic message from the Pope and all but emptied Saint Peter's Square.

On Friday, some offices of the Secretariate of State -- the Vatican's central government -- were "closed as a precaution following a suspected case of COVID-19," another Vatican source told AFP.

The source said Vatican officials were awaiting the test's results but gave no other details.

Pope Francis, who is active on social media, told his 18.1 million Twitter followers that he wished to "express again my closeness to those who are ill with the coronavirus and to healthcare workers who are caring for them".

The Vatican and its 450 residents are entirely surrounded by Italy which is battling the most deadly virus outbreak outside of China -- 148 people have died in the past two weeks and over 3,800 people have been infected.

The few tourists strolling around the normally crowded Saint Peter's Square in the Vatican on Friday sounded anxious about the rapid spread of the new illness.

"I am afraid because it is a new thing. There are many cases, many deaths," said Lucilia, a 41-year-old Brazilian nun who has spent nine years living in a small Italian village and was visiting the Vatican on her way back to Brazil.

"Everything is happening very quickly and we are scared because we are sure of nothing."

Most of the Vatican's employees live in the Lazio region, where 44 people have tested positive for the virus.

Pope Francis has recently suffered from a bad cold but reportedly tested negative for COVID-19.

The 83-year old has a personal doctor and does not visit the medical centre -- except for rare trips to greet staff.

The Vatican said on Thursday it was considering changes to Pope Francis's schedule "to avoid the dissemination" of the new coronavirus.

It did not say whether the Argentinian pontiff would be temporarily kept away from crowds or whether he would stop shaking hands with visitors.

Francis has not been seen in public since announcing during his traditional Sunday prayer before crowds in Saint Peter's Square that he was skipping an annual spiritual refuge south of Rome because of a cold.

The pontiff has cut down his schedule and has spent most of his time at home, the Saint Martha's guest house in the Vatican.

"The cold with which the Holy Father was diagnosed is running its due course," Bruni told journalists Thursday.

Francis lost part of a lung as a young man and suffers from sciatica.

But he rarely cancels appointments and normally takes extra time to mingle with crowds.

The Vatican is expected to supply staff working in close contact with tourists with masks and gloves.

In Rome, priests are discouraging people to exchange the sign of peace and holy water fonts are being emptied.

The 100 U.S. counties with the highest death rates from COVID-19 voted for former President Donald Trump by 18 points, according to data from Johns Hopkins University.

The list of the top 100 counties was compiled by ACASignups.net as of March 6.