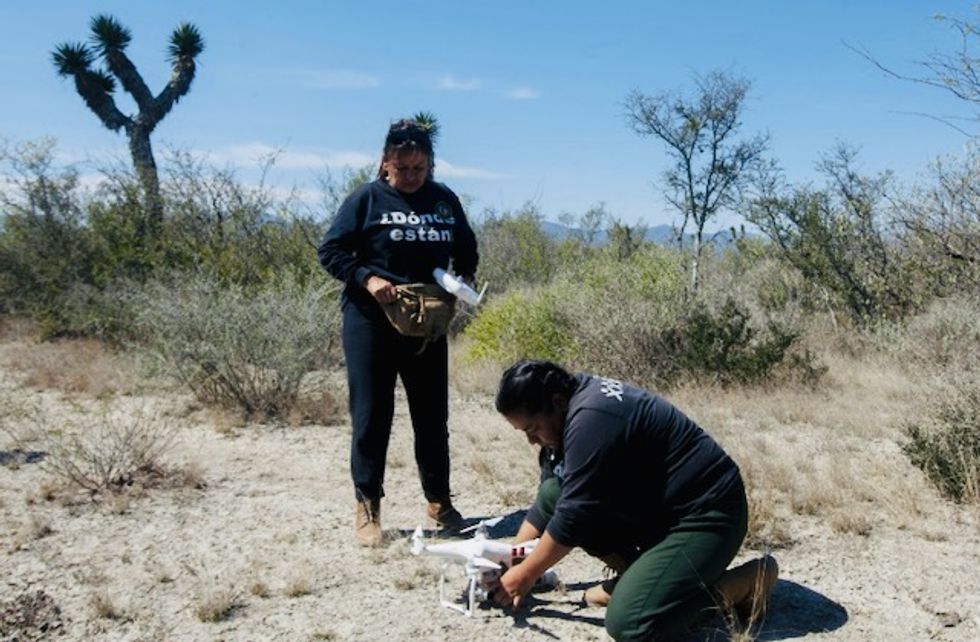 Leticia Hidalgo smears her face with sunscreen and walks steadily across the weedy wasteland she has come to know as one of Mexico's killing fields.

Frustrated with a lack of response from authorities, retired school teacher Hidalgo has taken a years-long quest for her missing son into her own hands, learning to use a drone to search for traces of his body.

Mexico has been overwhelmed by an escalation of narco violence that has left more than 60,000 people missing since 2006.

Hidalgo's son Roy is one of them, and she believes he could well be here, somewhere beneath the scrubland at her feet, in what she calls a likely "place of extermination."

Roy Rivera was kidnapped the morning of January 11, 2011, by armed men who came to the family home in the northeastern state of Nuevo Leon.

AFP / Julio Cesar AGUILAR Leticia Hidalgo and Angelica Orozco, members of United Forces for our Disappeared in Nuevo Leon, look at photos taken by a drone in Salinas Victoria February 24, 2020

Some of them wore police uniforms. He and his brother tried to fend off the men with a knife while Hidalgo called for help from a balcony.

She sees that moment as the end of her innocence.

Now this courageous 57-year-old has turned into an amateur detective, armed with a drone and a burning passion to find her son's remains.

"We are going to first fly the drone to find points of interest," she says to the man beside her, a special prosecutor for missing persons, Eduardo Saucedo. Police officers stand in the background, supervising the search of the four-hectare area of land at Salinas Victoria municipality.

At 57, Hidalgo has become an expert in drone flying, because she has had to. Her plan here is to create an "orthomosaic map"-- a photo representation of the area that provides detailed information and helps identify variations in the surface, such as discolorations, depressions or small hills, which could indicate the presence of a body.

She and Angelica Orozco, a volunteer from the United Forces for Our Disappeared organization in Nuevo Leon, will later be able to compare information from the drone with Google images to gauge recent activity at the site.

AFP / Julio Cesar AGUILAR Volunteers of the United Forces for Our Disappeared (FUNDENL)study pictures taken from a drone, comparing them with similar images of the same area over several years

Rivera, who was studying philosophy and literature, was about to turn 19 when he was kidnapped. Hidalgo describes him as a "a shy but affectionate" young man.

Before paying the ransom, Hidalgo managed to talk to her son on his cellphone, then use its GPS signal to track the phone on her computer.

But one day, Roy's signal went out. Fearing the worst, she decided to learn other sleuthing techniques, this time how to look for signs of shallow graves.

She learned how to drive metal rods into the ground, pull them up and smell the hole in the earth to try to detect decaying corpses buried below.

She even contacted a treasure hunter to teach her how to detect metals. "Sometimes we also find cartridges" of bullets, she said.

In the end she teamed up with other victims' relatives to buy the drone.

In an initial review of more than 200 images taken by the drone, they discover some new clues.

"Here you see a path that leads to a clearing," Hidalgo says, pointing to one of the images on her laptop screen.

"This white area here might be rocks, but it is rare to see them in clusters," said Hidalgo, who sighs from time to time as she looks at the photos.

AFP / Julio Cesar AGUILAR Leticia Hidalgo (L) and Angelica Orozco (R), members of a volunteer network set up to locate missing people, prepare a to fly a drone in a search of wasteland for traces of remains

Thousands of calcified body parts have been discovered on the site in past searches, but this is the first time they have used a drone to look for clues as to what might lie under the surface.

Hidalgo says this "was probably a place of extermination."

"The hundreds of thousands of body parts they have found here, have been on the surface," she said.

Thanks to the drone, the anthropologists will now "have a broader, sharper aerial vision... it is not necessary to spend hours, man, getting sunstroke by walking around."

Saucedo says there is evidence that kidnap gangs had killed their victims and disposed of their bodies here. They incinerated their corpses and scattered their remains or buried them in shallow graves, anything to complicate efforts to find and identify them.

Fernando Gonzalez, an independent forensic anthropologist, suspects that a house on the property could have been the place where the bodies were incinerated.

In Nuevo Leon, "nobody has ever looked for human remains as we are doing now," said Hidalgo.

"But it also gives me a feeling of helplessness to know that even with all this, we still cannot find Roy."