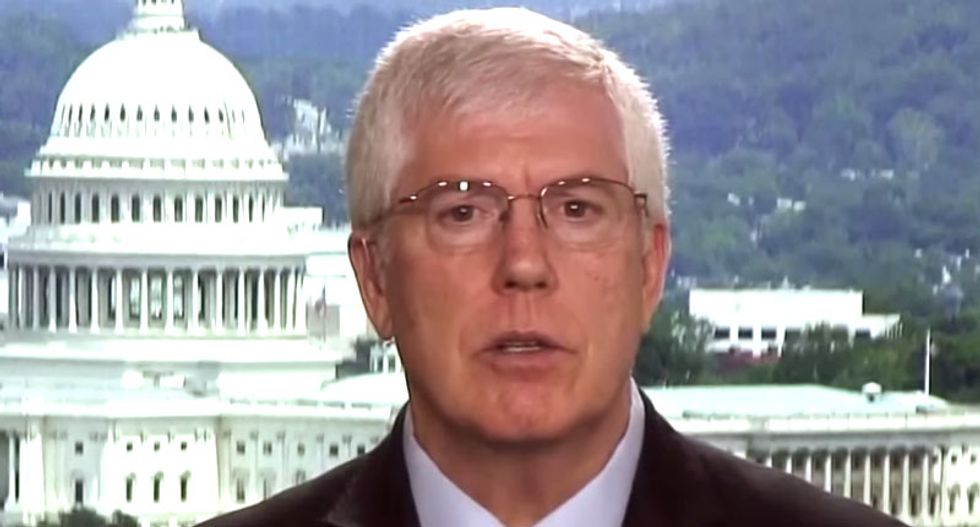 Mat Staver, chairman of the Liberty Counsel, in an interview with NewsMax (Screenshot)

Liberty Counsel is making the most of the COVID-19 pandemic to portray itself as a defender of embattled religious liberty and push the group’s narrative that Christians in America are facing unprecedented persecution—a narrative that also happens to be one of President Donald Trump’s main tactics for motivating and turning out conservative evangelical voters for his reelection campaign.

Starnes is himself one of the primary promoters of Christian persecution stories, and he and Staver talked about cases in which local officials have taken action against pastors and churchgoers for violating public health restrictions on group gatherings. Liberty Counsel is representing Tampa, Florida-based evangelist Rodney Howard-Browne, ​who was arrested for defying a local stay-at-home order, and others who have run into that kind of trouble.

Staver told Starnes about people who lost their jobs or were told they were unwelcome in a drug store when people realized they attended churches that had drawn media attention for continuing to gather. “It is unbelievable the harassment, the targeting of these churches all over the country,” Staver said. And he said a Virginia pastor Liberty Counsel is representing faces a year in prison for having “six people over the governor’s magic number of 10 in a 293-seat sanctuary.”

“I’ve never seen anything like this ever before, anything come close to this,” Staver said. “This is the most outrageous and, frankly, unbelievable situation I’ve ever seen with regards to the absolute disregard of the Constitution.”

And Staver made what certainly seems to be a comparison to Nazi Germany’s treatment of Jews, though he did not use those exact words:

So, it is absolutely—I mean, it’s a targeting. It is, you know, I don’t want to be too melodramatic, but I’m telling you what. You know, this happened before in history. We’ve seen people being targeted, that you are being targeted with a particular symbol that you have to wear. And then so you get targeted with your business, you get terminated from your job, and eventually you get ghettoized. And what we’re seeing here is the absolute targeting of Christians in churches to a level I’ve never even imagined would happen in America.

Staver may have said he’s never seen anything like this, but he has frequently compared Christiansin the United States today to Jews in Nazi Germany.

On Monday, Liberty Counsel launched its “ReOpen Church” campaign, “calling on the churches to open and believers to start meeting again on Sunday, May 3.” It is clear that in some parts of the country, restrictions on public gatherings will still be in place on May 3, suggesting that Liberty Counsel may be hoping to provoke additional incidents that they can portray as anti-Christian persecution.

Look, they said that we had to close for two weeks. Most people were fine with that. The two weeks went to four weeks, then the four weeks went to six weeks, and it continues to go on. So, then they said [gatherings should be limited to] 250, then 100, 50, 10—in New Mexico, it’s five people. And it goes on and on and on. When are we going to say enough is enough? Look, nobody wants to put their people in jeopardy. I don’t know of any pastor that wants to harm anyone. But we can take reasonable efforts. If the liquor stores can be open and all the other things that are open out there, the commercial operations that are open. Churches have a constitutional right to exist; those others do not. They don’t have the right to exist. But the First Amendment guarantee the church’s right to exist. The Greek word for church is ekklesia; where we get the word synagogue is from a Greek word synagoge. They both mean ‘assembly,’ places of assembly. So, let’s begin that process. Because the churches are more essential now than ever.

The website promoting Liberty Counsel’s “ReOpen Church Sunday” encourages churches to “include appropriate measures of sanitization and appropriate social distancing between families” and consider a range of options, including seating outside the building and online access for higher risk individuals.