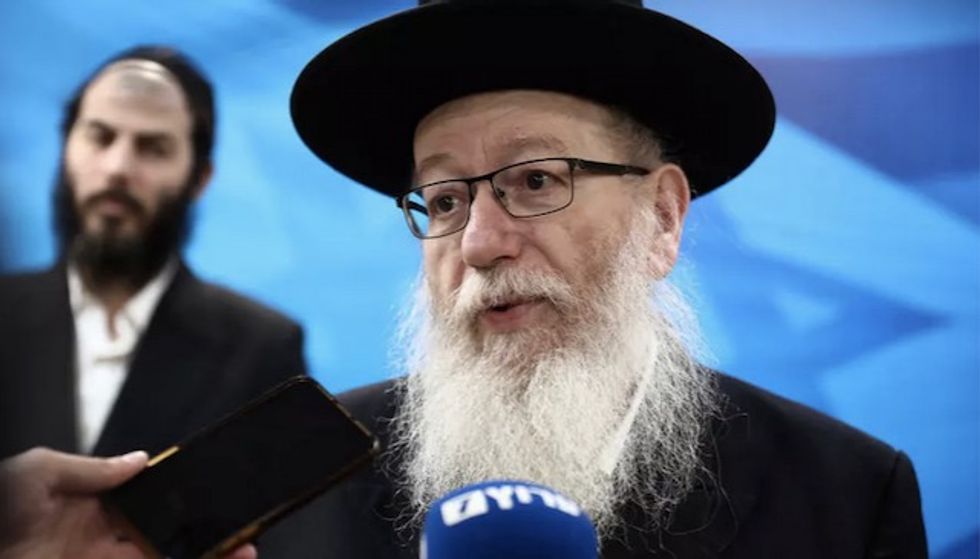 As Israel's health minister, ultra-Orthodox Jewish politician Yaakov Litzman has been thrown into the coronavirus limelight but his failure to persuade his own community of the dangers has drawn widespread crtiicism GALI TIBBON POOL/AFP

To some, Israeli Health Minister Yaakov Litzman is guilty of a "catastrophic failure" of leadership for not urgently conveying the coronavirus threat to the ultra-Orthodox Jewish community that elected him.

Milder critics have described Litzman as a "tragic" leader, whose limited authority compared to ultra-Orthodox rabbis' hindered his ability to persuade constituents to embrace science-based protections against the outbreak.

The coronavirus crisis presented the 71-year-old Litzman, himself ultra-Orthodox, with daunting challenges -- even before he and his wife tested positive for the virus.

But experts say his struggle to take charge of policy is symptomatic of broader tensions between the ultra-Orthodox, known as haredim in Israel, and other Israelis.

Some have speculated that the pandemic may ultimately force haredim to accept that their desire to remain isolated from the rest of Israel must change.

Litzman's role in the crisis speaks to the "clash of loyalties" embedded among haredim, Rabbi Yehoshua Pfeffer, an ultra-Orthodox expert, told AFP.

Despite sitting in parliament as head of the United Torah Judaism alliance and serving in cabinet, Litzman's "primary loyalty" is to the rabbinical leaders of his Gur Hassidic sect, Pfeffer said.

"It is actually incredible that you have a health minister whose underlying ideology, whose frame of reference, is the 'us versus them' mindset" that haredim feel towards less religious Israelis, Pfeffer said.

"This coronavirus crisis really accentuates... that this tension is going to require a resolution," he added.

Prime Minister Benjamin Netanyahu's government is generally viewed as having reacted swiftly to the crisis, imposing travel bans and movement restrictions before many other countries.

But ultra-Orthodox neighborhoods initially resisted social-distancing measures, especially regarding the closure of synagogues and religious schools, or yeshivot.

Israel has more than 9,000 confirmed cases of COVID-19 but more than a third of those are among haredim, a group that accounts for only 12 percent of the country's population.

That disproportionately high infection rate has forced the imposition of exceptional containment measures in haredi communities, including a beefed up military presence in the city of Bnei Brak.

"I don't think he was doing anything to hurt the rest of Israeli society," Lipman told AFP.

"I think his failure came in not communicating that (strategy) to the ultra-Orthodox community... and that was a catastrophic failure," he said.

For many, the most exasperating question surrounding Litzman is why -- as health minister and one of Israel's most prominent haredi leaders -- he did not push harder to ensure his community stayed safe.

As Lipman noted, the preservation of life is of "highest value" in haredi ideology.

Jews "violate all sins but three cardinal sins (murder, idolatry and sexual immorality) to save a life," Lipman said.

That means temporarily closing synagogues in order to safeguard an entire community is absolutely permitted under Jewish law, according to experts.

"I can say with 100 percent clarity, had Litzman sat down with the rabbis and explained to them the nature of this virus, how contagious it is, how lethal it is, they would have ruled that life comes first," Lipman said.

For Pfeffer, Litzman failed to act because he feared his political standing would suffer if he delivered difficult messages to rabbis, specifically that synagogues and yeshivot needed to close.

"Litzman, like many haredi (political) leaders, is a tragic leader in a sense," he said. "They feel very limited in what they are able to say."

"As a political figure, he knows that his standing is contingent on rabbinical positions," Pfeffer added.

And because he and other haredi leaders failed to convey that danger quickly, "there are going to be changes in the community," Malach told reporters.

Malach said there were already indications that some haredim are consulting non-Orthodox news sources and have expanded their internet use, possibly suggesting they no longer trust their leaders to keep them informed about COVID-19.

For Lipman, the fallout from the pandemic could be similar to that during the 1990-91 Gulf war, when haredim realised it was essential to have radios in their homes to receive real-time information about incoming Iraqi scud missiles.

After the pandemic, "there is going to be a re-assessment about relationships with rabbis. In particular, who is giving the rabbis (life and death) information," Lipman said.