Orthodox Easter services hit by virus as many stay home 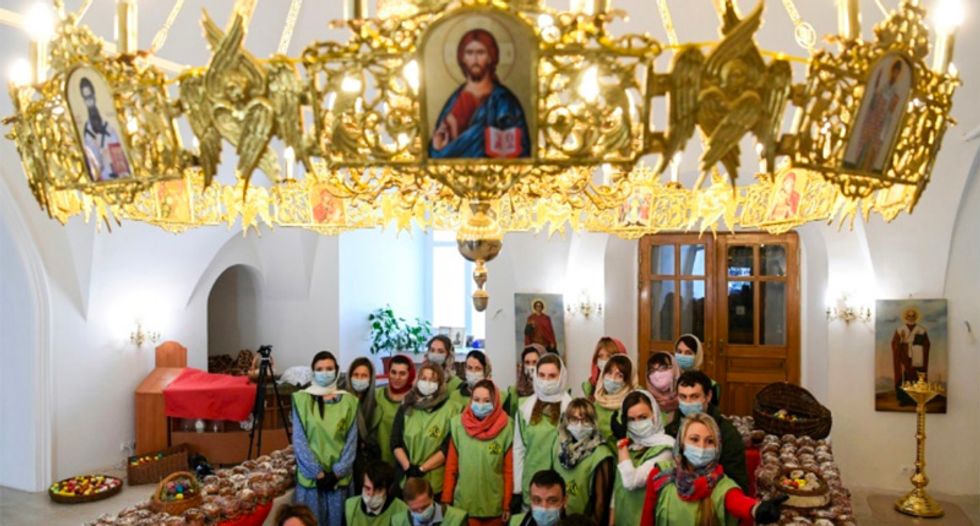 While many watched services online or on television, some sidestepped virus fears to attend churches on the most important date in the Orthodox calendar.

In Georgia, several hundred took part in a midnight mass at Tbilisi's Holy Trinity Cathedral after the government allowed public attendance despite a nightly curfew aimed at curbing the virus.

"I could have stayed at home and watched the service on television but only here in this holy church can I find true comfort," one worshipper, 58-year-old Lamara Zhvania told AFP.

Orthodox Christians, the world's third largest group of Christian believers, this year celebrate Easter a week after Catholics and Protestants because they follow a different calendar.

Last week's Easter celebrations took place in empty churches while Pope Francis live-streamed his traditional message from the Vatican as the pandemic that has killed more than 150,000 made mass worship too risky.

Russian Patriarch Kirill, who leads 150 million believers, held a service in Moscow's Christ the Saviour Church with no worshippers attending.

In a televised address, the Patriarch focused on "the terrible illness that has touched our people" saying the church was empty but "we are together -- one big family of Orthodox believers".

Russian President Vladimir Putin did not go to a service as usual but visited a chapel at his residence outside Moscow.

"This year the festival is taking place with restrictions forced on us. They are necessary to fight the spread of the illness," he said in a video address sitting by a table laid with traditional kulich Easter cakes.

AFP / Sergei GAPON Belarusian religious leaders have urged Orthodox Christians to celebrate Easter at home, but President Alexander Lukashenko says he will be in church

In Moscow and the surrounding region, where most Russian COVID-19 cases are concentrated, churches held services behind closed doors with broadcasts online or on television.

Some parishioners held candles and watched from outside church fences as priests led traditional processions around churchyards.

Services remained open in many other parts of Russia, which has reported around 36,800 cases of coronavirus and more than 300 deaths.

In much of the wider Orthodox region, churches were not open to the public.

The Istanbul-based Ecumenical Patriarch of Constantinople ordered services to be closed to the public and broadcast online.

The same decision was taken in Cyprus, Greece, Serbia and North Macedonia as well as in Egypt, where Orthodox Coptic Christians comprise 10-15 percent of the population.

Jerusalem's Old City is normally packed for Orthodox Easter but was almost deserted at the weekend under Israel's strict lockdown measures.

The annual Holy Fire ceremony took place behind closed doors in the city's Church of the Holy Sepulchre. The flame was then taken to Orthodox countries worldwide.

According to tradition, the Holy Sepulchre stands on the site of Jesus' crucifixion and burial.

In Romania, while churches closed their doors, volunteers and priests went to people's homes handing out loaves of consecrated bread and sharing the holy flame.

A number of Orthodox churches opposed the imposition of lockdown measures on their most important holiday.

In Bulgaria the Orthodox Church kept services open to all, but worshippers have to wear masks and stand at a minimum distance from each other.

Dimitry Goldman, 46, wore a face mask to attend an open-air midnight service outside the Alexander Nevski cathedral in central Sofia.

He said he was praying for "health... and that we overcome this crisis and people go out in the streets again."

Georgia's government bowed to pressure from religious authorities and allowed services in the largest churches despite a curfew and public lockdown in the Black Sea country with 385 confirmed cases.

Ukraine saw a similar divergence of views with President Volodymyr Zelensky urging people to stay at home while the country's Orthodox Church loyal to the Moscow Patriarch encouraged worshippers to attend outdoor services.

The Church has been been hard hit by the virus with 93 people infected at its historic Kiev-Pechersk Lavra monastery where three monks have died.

In ex-Soviet Belarus, a country of nine million with a relatively high number of cases, Belarusian Church leader Metropolitan Pavel told believers to stay at home saying "human life is much more valuable".

Easter services saw a third of the normal number of worshippers but President Alexander Lukashenko -- who regularly casts doubt on the extent of the pandemic -- said he planned to attend on Sunday, proclaiming: "I will be in church. It is my tradition."