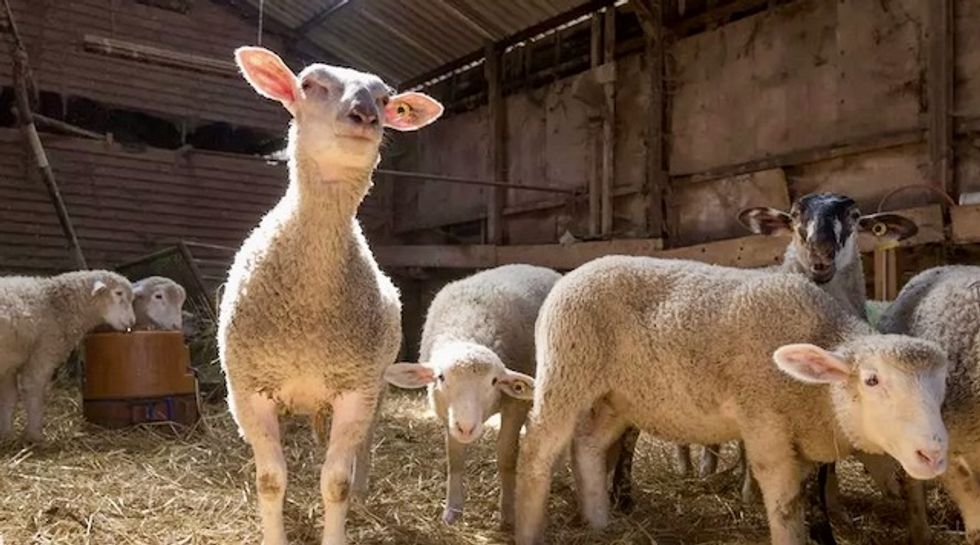 Normally at this time of year, millions of people around the world are planning elaborate lamb-based menus -- spits, roasts, kebabs or stews -- for a celebratory Easter Sunday family lunch.

But this year, there will be fewer tables groaning with holiday food as the coronavirus outbreak has put paid to religious and family gatherings.

Lamb sales have plummeted, and sheep farmers around the world are in despair.

"I was planning to slaughter 100 to 120 sheep, now I don't know what to do with them. Nobody does," said farmer Christos Kyriakopoulos in the western Peloponnese region of Greece.

"Farmers are out of options. We are facing a 90-percent drop in demand compared to last year."

In Christian Orthodox Greece, fines of 1,000 euros ($1,087) have been introduced for gatherings over 10 people to discourage the traditional Easter feast hosted on every village square.

"Seven out of 10 Greeks enjoy roasting lamb for Easter. That's not happening this year," Greek meat trader Angelos Asteriou told AFP, staring dejectedly at the inventory on his computer screen.

In Britain, where people traditionally enjoy a roast leg of lamb on the religious holiday, some 35,000 fewer lambs were slaughtered in the week ending March 28, according to the Agriculture and Horticulture Development Board (AHDB).

And in major lamb producer New Zealand, meat industry officials said the Easter lamb kill was about half that of last year.

"For us, Easter was supposed to be the best time of the year," said Michelle Baudouin, a sheep farmer in France's central Puy-de-Dome region.

This year, Catholic and Christian Orthodox Easter, Jewish Passover and Ramadan for Muslims all occur within weeks of each other. Eating lamb is traditional for all four, and France's 25,000 sheep farmers had counted on bumper sales.

Apart from lost sales revenue, this also means farmers are stuck with the unplanned extra costs of feeding the animals.

"They are gaining weight, they are growing fat, and they are losing value," said Baudouin.

"Extra strawberries and asparagus can be thrown away, but our animals, what do we do with them?"

According to the UN's Food and Agriculture Organization, about half-a-billion sheep are taken to the abattoir around the world each year. The figure includes lambs which are young sheep up to one year old.

Farmers say the coronavirus crisis, which has shocked the global economy and crippled brought several industries, has seen wholesalers push down lamb prices.

"We're looking at a major blow to our income. Some are forced to sell at very low prices, and others can't find any buyers at all," said 38-year-old Panagiotis Langadakis, who farms in a village near Thessaloniki.

"Last year we were selling lambs and goats at five euros per kilo. This year prices are four euros maximum. It's a disaster."

AHDB analyst Rebecca Wright said anti-coronavirus confinement and social distancing measures alone were not to blame for the surplus of lamb, an expensive meat for most.

Many consumers have seen their salaries shrink as companies have had to reduce working hours, or even fire people.

"Domestically, consumers' financial concerns mean they are trading down rather than looking to the more expensive proteins," said Wright.

There have been some winners, though.

In Ireland, 41,000 lambs were slaughtered in the last week of March this year -- up 3,000 from a year earlier, according to Irish food board Bord Bia.

With restaurants shut and a travel lockdown in place, the Irish Farmers' Association (IFA) has reported a shift in demand from the retail sector.

"A lot of people are at home and they're going to give it a go -- maybe cooking a piece of lamb or trying something different," IFA sheep chairman Sean Dennehy told AFP.

"Before, the problem that people had is that they didn't have enough time. So if you're working from home you have a bit more time to do that."