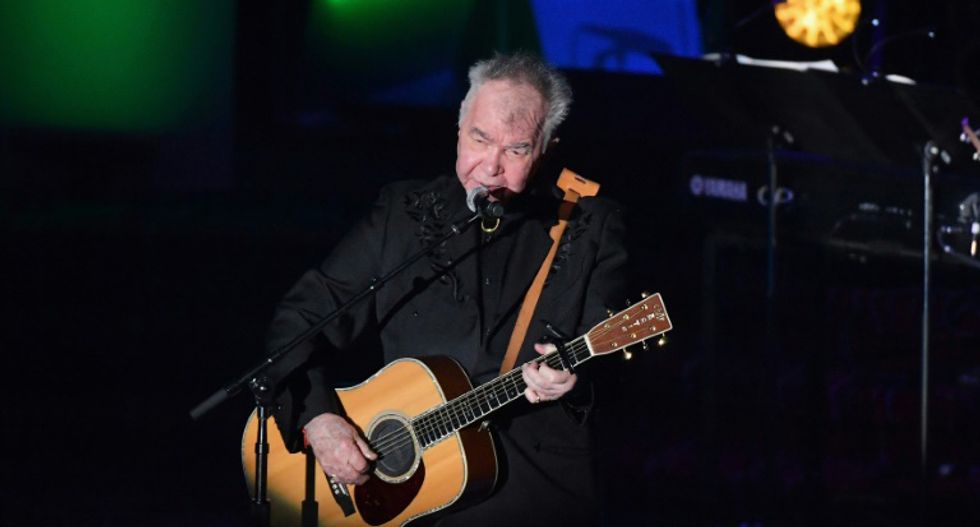 John Prine performs onstage during the 2019 Songwriters Hall Of Fame Gala, where he was among those inducted. AFP/File / Angela Weiss.

John Prine, an American folk legend widely considered one of his generation's most influential songwriters, died following complications of coronavirus Tuesday, his publicist said on behalf of his family. He was 73 years old.

On April 3 Prine's wife Fiona had posted on social media the beloved country and folk star was on his eighth day in the ICU on a ventilator, and had pneumonia in both lungs.

Once dubbed the "Mark Twain of American songwriting," over his five decades in the music business Prine carved an image as an off-the-cuff wordsmith who forged melancholy tales with a dose of surrealist wit.

Bob Dylan has named Prine among his favorite songwriters, citing the literary yarn "Lake Marie" as a favorite from his fellow folk bard's vast catalogue.

"Midwestern mind-trips to the nth degree. And he writes beautiful songs."

Born October 10, 1946 in Maywood, Illinois, Prine took up singing and strumming his guitar as a hobby before emerging on the Chicago folk revivalist scene in the late 1960s, when he was discovered by country star Kris Kristofferson.

His 1971 self-titled debut album was a critical hit, a first collection of his unique social commentary and protest songs that would make the troubadour a staple of Americana for decades to come.

His anti-Vietnam War hit "Your Flag Decal Won't Get You Into Heaven Anymore" found a second coming in the early 2000s as the United States embarked on wars in Afghanistan and Iraq, earning Prine both standing ovations and angry hate mail.

"When someone turns the country backwards," he told Florida's St. Petersburg Times in 2005, "they should at least expect to be called out on it."

The bluegrass-loving musician with a penchant for allegory enjoyed riffing on country music tropes with stereotypical spoofs, adding whimsical touches to heavier lyricism.

Prine spun tales of past loves as well as solitude, estrangement and regret, especially in his later work streaked with prominent threads of mortality.

"His is just extraordinarily eloquent music -- and he lives on that plane with Neil [Young] and [John] Lennon," said Pink Floyd's Roger Waters of Prine in 2008.

In 1981, tired of the recording establishment that he considered exploitative of artists, Prine founded his own record label Oh Boy Records in Nashville.

The Grammy winner with 19 studio albums to his name this year received a lifetime achievement award from the Recording Academy.

In 2019 Prine was inducted into the Songwriter's Hall of Fame, and in 2016 joined elite company including Chuck Berry and Leonard Cohen in earning a prestigious songwriting award from the PEN literary organization.

"The combination of being that tender and that wise and that astute mixed with his homespun sense of humor -- it was probably the closest thing for those of us that didn't get the blessing of seeing Mark Twain in person," said fellow musician Bonnie Raitt, who famously covered one of Prine's most cherished songs "Angel From Montgomery" in 1974.

'Gonna get a cocktail'

Prine continued to tour well into his golden years, releasing his last studio album in 2018.

His storied career included two battles with cancer. In 1998 he received a squamous cell cancer diagnosis and had surgery to remove diseased tissue in his neck, severing several nerves.

After a year of speech therapy he was able to perform again, albeit with a new gravelly timbre.

In 2013 he fought lung cancer and had part of his lung removed, a process he rehabilitated from by running up and down his stairs and singing two songs with his guitar while still breathless.

The artist's wife Fiona had said in March that she had tested positive for COVID-19, and his family on March 29 said Prine was intubated and in "critical" condition due to the virus that's left more than 80,000 people dead worldwide.

His death from coronavirus complications follows that of country hitmaker Joe Diffie, who also succumbed to the fast-spreading virus.

Ever a jokester in the face of tribulation, the heaven Prine envisioned on his last album would allow him to resume his youthful habits: "I'm gonna get a cocktail: vodka and ginger ale / I'm gonna smoke a cigarette that's nine miles long."

"I'm gonna kiss that pretty girl on the tilt-a-whirl," Prine sang. "'Cause this old man is goin' to town."