Women on the frontline: Nurses are patients' last contact before passing away 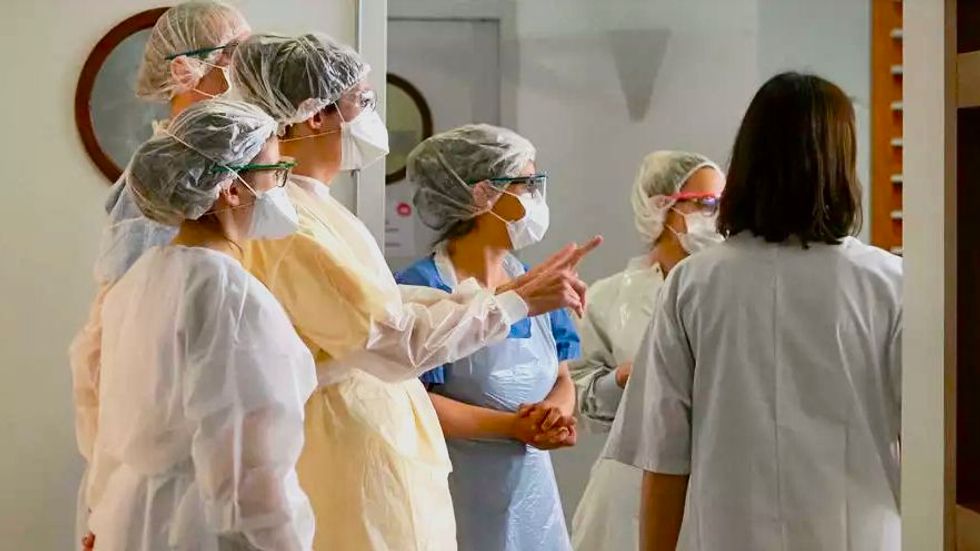 Medical staff are having to make tough decisions on who should and should not be given precious intensive care beds © Guillaume Souvant, AFP/File

Every night, from their balconies and windows, the French publicly applaud healthcare workers and nursing staff on the frontline in the fight against Covid-19. In France, nearly 90 percent of nurses are female. So how are these women coping with this unprecedented crisis? FRANCE 24 spoke to four of them.

"For the moment, our most important mission is to help patients but if this continues, they will have to find cannon fodder elsewhere," said Leslie, a palliative care nurse in Marseille, working 12 hours a day to care for people at the end of their life.

Like all hospitals and clinics in France, her department is constantly receiving critical Covid-19 cases: "We have drastically reduced visits, so imagine telling families, who know their loved ones are at the end of their life, that they have no right to see them. Psychologically, this is incredibly difficult for us. We are their only contact before they die. "

In her department, there is only one male employee out of 18 nurses. It’s estimated that 88 percent of nurses are women, according to SNPI, a French union for nurses.

'I said to myself: if it’s positive, that's it, I'm finished'

The 31-year-old nurse said her clinic recently saw a patient in the final stage of cancer who showed symptoms suggesting coronavirus. "He had a fever and respiratory failure. He arrived at our department in the morning but the doctor decided to test him at 2pm. Yet throughout the morning, I was in close contact with him without protection."

The result did not come back until the next day, creating enormous anxiety for Leslie. "I said to myself: if it's positive, that's it, I'm finished."

It turned out that he was negative but Leslie was still furious at the lack of responsiveness from her superiors which had been the case since the pandemic broke out in France. The same is true for Sylvie*. The 50-year-old nurse has been practicing for 20 years and now works for a mobile emergency and resuscitation service in northern France. As soon as she heard of the epidemic in China, she began to study the virus.

"When I saw what was happening there, I said to myself, we had to prepare. We’re now realising how serious the situation is; we should have been better prepared,” Sylvie said.

One morning, she was looking after a 22-year-old female patient who had a 40°C degree temperature while struggling for oxygen: "She was like a dog after a race, very short of breath. We transferred her to intensive care as soon as she arrived."

Like many, Sylvie did not think that young people would be seriously at risk. "And here’s a concrete example of a 22-year-old suffering serious symptoms. She has a good chance of coping but her case was very worrying,” she said.

She worried that information was not being passed on to frontline workers. "We’re told that surgical masks are enough but we don’t believe it. The doctors themselves are not even aware of all the measures to take when there is a doubt about a patient."

Pauline* is a nursing assistant in Bordeaux. In her cardiology department, as with all medical facilities in France, non-emergency operations have been postponed since mid-March at the government’s request.

Surrounded by a majority of women in her workplace (39 out of 40 nurses), she confirmed there had been a lack of equipment and problems with distribution.

"As they were afraid of thefts, they stored everything in locked management offices. Every time, we need a new mask, we have to ask permission to access their offices. So we ended up wearing a mask a day when we should have changed it every three to four hours," Pauline told FRANCE 24.

Many French healthcare workers have been openly critical about the lack of personal protective equipment since the beginning of the pandemic.

'We just don't know how big this storm is'

In her unit, Virginie*, has at least 10 patients with Covid-19. The night nurse at the Pitié-Salpêtrière hospital in Paris does not complain but readily admits the work is unrelentless.

"The infected patients come here. We have to decide where to place them: send them home if it's not too serious or send them to an intensive care unit when their condition deteriorates. We also have to disinfect the rooms; it doesn't stop. It’s making us question all of our medical knowledge,” she told FRANCE 24 while saying she had never experienced a situation like this since she began working in 1996.

Virginie added that she is “a little anxious but not afraid".

In her department, made up mainly of women, two colleagues have caught the coronavirus.  "The main thing is not to convey our anxieties to patients, but we have to be honest, we just don't know how big this storm is."

*Names have been changed