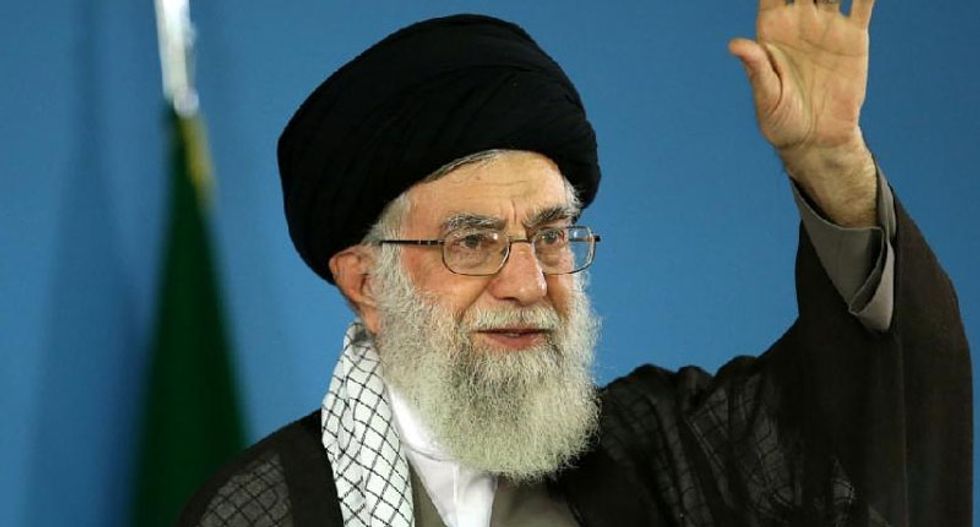 Iran's supreme leader said it was an "Islamic duty" to fight for the "liberation of Palestine" in a landmark speech Friday amid rising tensions with regional arch-enemy Israel.

Ayatollah Ali Khamenei lashed out at Western nations and their Arab "puppets" for supporting the Jewish state, in his first ever address marking Quds (Jerusalem) Day.

The 80-year-old leader also appeared to confirm for the first time that Iran has helped to provide Palestinians with arms.

The remarks came at the end of a week that saw Israeli Prime Minister Benjamin Netanyahu launch a Twitter tirade against Khamenei and the two sides accuse each other of cyber attacks.

"The aim of this struggle is the liberation of the entire Palestinian land" and "the return of all Palestinians to their country," Khamenei said in the speech broadcast live on state television.

"The policy of normalizing the presence of the Zionist regime in the region is one of the major policies of the United States of America," he said.

"Some Arab governments in the region, which play the role of US puppets, have provided the necessary preconditions for this, such as economic ties and the like; these efforts are completely fruitless and sterile.

"Everyone must fill the hand of the Palestinian fighter and strengthen his back.

"We will proudly do our best in this way.

"One day we realized that the only problem of the Palestinian fighter... was the lack of weapons.

"We planned" to resolve this issue, and "the result is that the balance of power in Palestine has changed: today Gaza can stand up to the Zionist enemy's military aggression and win."

Every year since the 1979 Islamic Revolution, Iran has marked Quds Day on the last Friday of Ramadan, the Muslim month of fasting, in solidarity with the Palestinians.

Khamenei was speaking at the event for the first time in more than 30 years as supreme leader, although he has repeatedly referred to the Palestinian cause as "the main problem of the Muslim world".

The Islamic republic has cancelled this year's Quds Day rallies to curb the spread of the novel coronavirus, which first emerged in the country in February.

This year's Quds Day comes after the assassination in January of Qasem Soleimani, the powerful commander of the Quds Force, the foreign operations arm of Iran's Revolutionary Guards.

Netanyahu on Wednesday blasted Khamenei on Twitter after the Iranian leader's own account posted quotes from a speech he made in November.

In the tweet on Khamenei's account, the Iranian leader was quoted as saying that "eliminating the Zionist regime doesn't mean eliminating Jews".

Netanyahu responded by saying: "He should know that any regime that threatens Israel with extermination will find itself in similar danger".

The Iranian leader's tweets were also condemned by US Secretary of State Mike Pompeo, who called them "anti-Semitic".

The next day Israelis woke to a series of cyber attacks targeting websites of businesses, municipalities and non-governmental organisations with a message in Hebrew and English: "the countdown to the destruction of Israel began long ago".

Earlier in the week, The Washington Post reported Israel had launched a cyber attack against the Iranian port of Shahid Rajaee, located on the Strait of Hormuz, a vital route for international oil traffic.

This attack was thought to be in retaliation for a cyber attack against civil hydraulic installations in Israel.