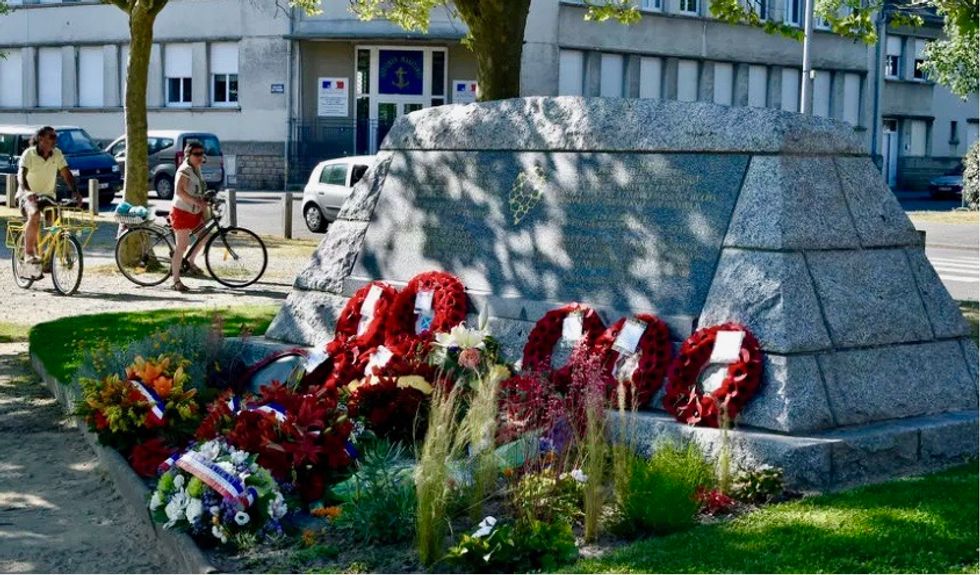 Eighty years ago on Wednesday, thousands of people met a watery Atlantic grave when Nazi planes sank a cruise ship requisitioned by the British government to evacuate troops from France after the invasion by German troops.

In one of the single deadliest events of World War II, the sinking of the Lancastria saw seaside communities in France's western Loire-Atlantique region scramble to rescue survivors, tend the wounded and bury the dead.

Bodies washed up on their beaches for weeks on end.

"I remember, when he found the bodies, there was an old man who said: 'This one was still warm'," recounts Michel Adrien, a resident of Ile de Noirmoutier, who was six at the time of the tragedy on June 17, 1940.

Now approaching 90, Adrien may not live to know the true toll.

Details of the sinking, including the number of souls lost when the Lancastria sank, remain shrouded by a so-called D-notice issued by Winston Churchill to hide the news of the sinking from a demoralized wartime public.

The media blackout was decreed for 100 years, until 2040, though much has become known about the incident via survivors, next-of-kin and historical researchers such as the Lancastria Association of Scotland.

The sinking is described as the worst single disaster in British maritime history, and the largest loss of life for British forces in World War II.

The thousands of passengers were mainly troops but also civilians who boarded the former cruise liner at Saint-Nazaire to flee the German advance.

Luftwaffe planes caught the ship exposed off France's Atlantic coast and bombed it, causing it to roll over and sink within 20 minutes as lit fuel set the surrounding sea ablaze.

The death toll is estimated at 2,500 to 6,000 -- more than the sinkings of the Titanic and the Lusitania combined.

"Secrecy... continues to shroud the Lancastria like the dark, silt-laden waters which now cover the wreck site," says the Lancastria Association, whose website lists survivor accounts and a petition for the wreck to be declared a maritime war grave under British law.

Valerie Roux, a WWII expert with the archive of the Loire-Atlantique department of France, has gathered spotty records over the years, mainly from a government building at Saint-Nazaire bombed during the war.

The papers in her collection, yellowed with time and now open to the public, reveal just how little is known about the victims.

"He was dressed in khaki pants and a khaki shirt with grey socks," states an entry on a list of washed-up corpses compiled by one municipality.

Another "wore a metal ring on his left ring finger."

In the seaside commune of Piriac were found the remains of soldiers Harry Bullock and Charles Heron, but a third body was listed as "unknown" according to "documents seized by the occupying army."

At Bernerie, records are incomplete because "the mayor, the deputy mayor and the mayor's secretary (were) all in the army."

Thibaud Harrois, a senior lecturer in British politics at the Sorbonne Nouvelle University in Paris, said the German advance in 1940 after the so-called "Phony War" -- an early period with no major hostilities -- "truly surprised everyone."

It led to Allied forces withdrawing from France, most famously at the Battle of Dunkirk that ended with some 340,000 troops evacuated by sea amid fierce fighting.

"In Britain, when one talks of the retreat of May 1940, it is the Battle of Dunkirk that has become the symbol, it has taken on mythical proportions because more soldiers were evacuated than planned," Harrois said.

The Lancastria, however, was a "failed" evacuation, which explains the desire by officials to conceal it, he said.

And it came amid news of France's formal capitulation to Nazi Germany.

Descendants of victims and survivors continue to honor the fallen.

"It is important for them," said Karine Allioux, in charge of international relations at the Saint-Nazaire city hall.

"For many it is the trip of a lifetime, to come here to pay homage to their ancestors," she said.

The ceremony to mark the anniversary has had to be toned down this year, limited to only 10 people because of the restrictions imposed to fight the coronavirus epidemic.