He was supposed to be in prison less than a year. Instead, he died after catching the coronavirus. 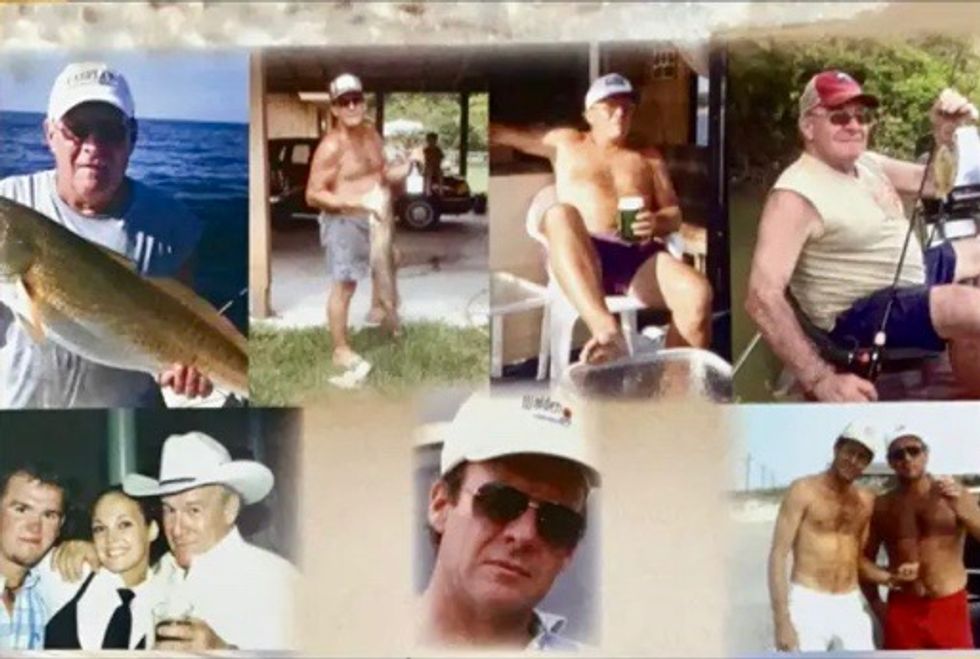 James Allen Smith, 73, died after contracting the coronavirus in a Texas prison. He was only supposed to be in prison for a months-long rehabilitation program. Photo credit: Courtesy of Jami Smith Hanchey

At least 84 Texas state prisoners have died after contracting the coronavirus, including men who were serving short sentences or set to soon go home. As the death count rose, advocates unsuccessfully called on the governor and parole board for early release.

James Allen Smith was only supposed to be at a Texas prison for a matter of months, sentenced to a drug and alcohol rehabilitation program after he pled guilty to a repeat DWI offense in January.

But in May, while in a Huntsville prison where Texas Department of Criminal Justice officials halted almost all movement as inmates and employees fell ill with the new coronavirus, the 73-year-old retired teacher from Bastrop also contracted the virus that causes the COVID-19 disease. Instead of coming home to his family after completing a short program, Smith died in prison custody on June 11.

“We never thought this would happen,” Lani Davis, Smith’s 26-year-old granddaughter, told The Texas Tribune last week, shock still evident in her voice. “He was going to get out, he was being fine… He was only sentenced to six months.”

At least 84 Texas state prisoners have died after catching the new coronavirus, according to TDCJ reports. The death toll, which the agency’s leader called “unprecedented,” is the second highest among state prison systems. Those who have died include men serving life sentences, a man who was days away from his release date, and others, like Smith, who were only supposed to be locked up for a short time.

For months, advocates in Texas and across the country have pushed for the early release of some vulnerable prisoners — such as those with underlying health problems — as lockups became hotspots for the new coronavirus that has killed more than 2,600 people in the state. They argued that a smaller prison population would make it easier for inmates to socially distance and also better protect prison employees who can spread the virus to their families and communities.

But while some states have moved to release more parole-eligible prisoners or those nearing the end of their sentences, Texas practices have gone unchanged.

“The spread of COVID in the prison system has shown that a period of incarceration for a number of people has turned into a death sentence,” said Peter Steffensen, a staff attorney with the Texas Civil Rights Project. “That doesn’t change the fact that the parole board and the governor are both empowered to take a number of different steps that they could have and should have months ago.”

Nearly 9,500 of about 131,000 people in Texas state prisons have tested positive for the coronavirus, according to TDCJ reports. Though the number of confirmed active cases went down in recent weeks, the agency continues to report more deaths.

At least ten people who work in Texas prisons have also died after contracting the virus, the agency has reported. More than 1,700 TDCJ employees were confirmed to have the virus.

TDCJ has been criticized for its handling of the pandemic by prisoner rights advocates, family members, and inmates — both in letters and a federal lawsuit. But early prison release decisions in Texas fall to the Texas Board of Pardons and Paroles, whose members are appointed by the governor. As the pandemic began taking hold in Texas earlier this year, both the board and Gov. Greg Abbott rejected the idea of early prison releases, with Abbott tweeting in March that “releasing dangerous criminals in the streets is not the solution.” A spokesperson did not respond to questions about whether the governor has changed his stance.

Abbott’s decision was supported by some Texas law enforcement officials, who feared more prison and jail releases could lead to more crime while the state is already in a public health crisis. On Wednesday, the parole board reaffirmed that “there have been no changes to the manner in which the [board] renders parole decisions.”

The state prison population did drop, however, because intake of new inmates from county jails was halted in April. On Wednesday, TDCJ again began accepting newly sentenced inmates on a limited basis after “significant consideration and planning,” a spokesperson said. That includes people who, like Smith, have been waiting in a local jail to be sent to a TDCJ rehabilitation program.

After entering the state prison system, Smith landed at the Estelle Unit in Huntsville for his rehab program shortly before the coronavirus shut down prison visitation and intake from jails.

Even after the virus was confirmed on his unit and his movement was restricted, he still wrote frequent letters and called his family on Saturdays. But in early May, the letters abruptly stopped, and one of his three daughters, Jami Smith Hanchey, later noticed her letters to him were returned undelivered.

Neither she nor her sister, who was Smith’s emergency contact, were told anything about his condition. But when she looked on the online inmate database in late May, Hanchey saw that her father had been transferred to the prison hospital in Galveston.

The sisters desperately and unsuccessfully tried to get information on their father. Finally, in early June, a prison supervisor called Hanchey to tell her Smith had a stroke but was OK and back at the Estelle Unit.

“Within one week, he’s died,” Hanchey, 45, said. “I don’t even know what from yet. Maybe another stroke? Maybe COVID?”

TDCJ spokesperson Jeremy Desel said Thursday that Smith first tested positive for the coronavirus on May 7 at Estelle and was moved to isolation. Desel said Smith was in the hospital from May 23 to June 5 for “a non-COVID ailment,” though he again tested positive for the virus while there. He was sent back to Estelle still actively infected with the virus, and six days later he was sent to a Huntsville hospital and died after going into cardiac arrest, Desel said.

TDCJ lists the deaths of 84 men who have died in its custody as “presumed COVID-19 deaths.” The presumptions are largely based on initial autopsy reports and medical investigations, and the cause of dozens of additional inmate deaths are still being investigated as potentially COVID-related. Desel said in some cases, though an inmate tested positive for the coronavirus, it is clear “it had absolutely nothing to do with their death.”

TDCJ notes on its list of presumed COVID-19 deaths that Smith had pre-existing conditions — Hanchey said he was on medication for a heart condition. But the agency said Smith’s preliminary autopsy results indicate COVID-19 was a contributing cause in his death.

Of the inmates with COVID-19 who died, Smith was supposed to spend the shortest amount of time in prison. But four others were serving sentences of five or fewer years.

Gerald Barragan, 62, was serving five years after being convicted of possessing two small bags of cocaine in Kendall County, according to court documents.

Another 62-year-old, Joe Channel, was given a three-year sentence in Nacogdoches County for jumping bail on a since-dismissed charge of drug possession.

David Uhrich, 60, had three years left on a five-year sentence out of Travis County on a drug dealing charge.

And 28-year-old Nicolas Andres Sanchez was sent to prison for three years after his probation was revoked for failing to report to his probation officer on a Dallas County domestic violence charge.

Of those serving longer sentences, 10 prisoners who had COVID-19 when they died had five years or fewer left to serve. One man, 54-year-old Alfredo De La Vega, died on May 5 with 12 days left on a 20-year sentence for aggravated sexual assault.

“Would it be hard to make that cut?”

In late March, when only a handful of TDCJ prisoners were known to be infected with the virus, inmates at a geriatric unit sued the agency for its handling of the pandemic. They argued for more protective measures like face masks and hand sanitizer.

But at hearings in early April, the federal judge overseeing the lawsuit kept coming back to a potentially simpler solution for the older, sick men that largely comprised the unit’s population.

“Would it be difficult for the prison authorities to make an early cut? To say, if people have all these characteristics: they are of compromised health, they are over the age of 65, they have served at least 75% of their sentence, and they have a habitat to go to, would it be hard to make that cut?” U.S. District Judge Keith Ellison in Houston asked in the teleconference hearing.

After some silence and noncommittal answers, agency representatives eventually told the judge that it’s not possible for TDCJ to decide that. Release decisions come from the parole board, and though there are mechanisms in place for the board to release more people for medical reasons, it is not being used on a large scale, according to board reports.

The board can approve early parole review and release for prisoners who are mentally ill, disabled, terminally ill, or require long-term care under “medically recommended intensive supervision.” But the program is rarely used. Last year, 76 inmates — fewer than 3% of those referred to the board — were approved for such release, according to a board report.

This year, 22 people were approved for early medical release between March and June, according to the board spokesperson.

“The only thing holding [the parole board] back is themselves,” said Steffenson, the Texas Civil Rights Project attorney. “We’ve seen dozens of people die and the expectation is that there are many more to come, and that’s a shame.”

Prisoner rights advocates have also called on the board to quickly release men and women who the parole board have already approved for release. In May, thousands of inmates had been approved for parole pending completion of education or rehabilitation programs — but because those programs had largely come to a standstill due to the virus, the inmates remained locked up.

Advocates and family members asked the governor and the board to let such inmates complete those programs outside prison walls, but those requests went unanswered.

Corrections departments, parole boards, judges and governors in numerous other states have released prisoners early during the pandemic. By May, Wisconsin released more than 1,400 people who were being held for probation or parole violations, while the governors of Kentucky and Oklahoma commuted hundreds of prisoners’ sentences. Multiple other states, including California and Ohio, approved the release of some inmates who had only months left on their sentences.

In Texas, Smith’s family said the system failed him — turning his six-month program into a death sentence. Since he wasn’t sentenced to prison, only the in-prison program, Hanchey feels Bastrop County and TDCJ both let her father slip through the cracks.

“He just felt like it was going to be like six months, get this over with,” Hanchey said.