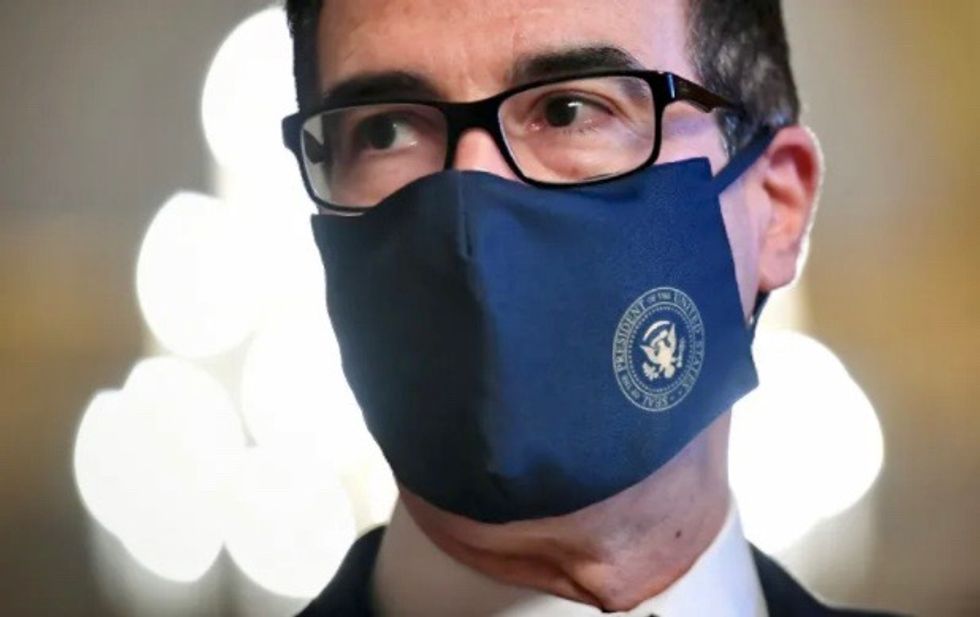 Treasury Secretary Steve Mnuchin is under fire for attempting to undermine the incoming Biden administration's response to the Covid-19 pandemic on his way out the door after his department confirmed Tuesday that it intends to place $455 billion in unspent coronavirus relief funds into an account that requires congressional authorization to access.

Bloomberg reported that the funds, which Congress allocated to the Federal Reserve in March for emergency lending programs to assist local governments and struggling businesses, will be put in the Treasury Department's General Fund following Mnuchin's widely condemned decision last week to cut off the relief programs at the end of the year.

"As the economy backslides amid skyrocketing Covid-19 cases, Secretary Mnuchin is engaged in economic sabotage, and trying to tie the Biden administration's hands."

Mnuchin requested that the funds be reallocated by the currently divided Congress, and the Fed has agreed to cooperate with the outgoing treasury secretary's move.

According to Bloomberg, "Mnuchin' clawback would make it impossible" for Janet Yellen, President-elect Joe Biden's pick to lead the Treasury Department, to utilize the funds "without lawmakers' blessing."

"The move leaves just under $80 billion available in the Treasury's Exchange Stabilization Fund, a pot of money that can be used with some discretion by the Treasury chief," Bloomberg noted. "By contrast, the CARES Act funds had specific uses, and weren't available for general government spending purposes."

While Mnuchin, a former Goldman Sachs banker, insisted he is attempting to ensure the funds are put to better use, Democratic members of Congress and other observers immediately accused the treasury secretary of a potentially unlawful ploy to hamstring the Biden administration's coronavirus response before the president-elect takes office. According to one analyst, Mnuchin's actions are an "explicit" violation of the CARES Act.

"This is Treasury's latest ham-handed effort to undermine the Biden administration. The good news is that it's illegal and can be reversed next year," tweeted Bharat Ramamurti, a member of the congressional commission established to oversee the use of coronavirus relief money. "For its part, the Fed should not go along with this attempted sabotage and should retain the CARES Act funds it already has."

Burning it down on the way out the door. There is no reasonable justification for this. https://t.co/Nn4w1lZy7D
— Michael Linden (@Michael Linden)1606249416.0

Sen. Ron Wyden (D-Ore.), the top Democrat on the Senate Finance Committee, denounced as "shameful" Mnuchin's effort to pull back the congressional relief funds and place them out of the Biden administration's reach.

"As the economy backslides amid skyrocketing Covid-19 cases, Secretary Mnuchin is engaged in economic sabotage, and trying to tie the Biden administration's hands," Wyden said in a statement to Reuters on Tuesday.

"He needs to stop sabotaging the Biden administration from cleaning up his mess and helping states, cities, and small businesses," said Warren.