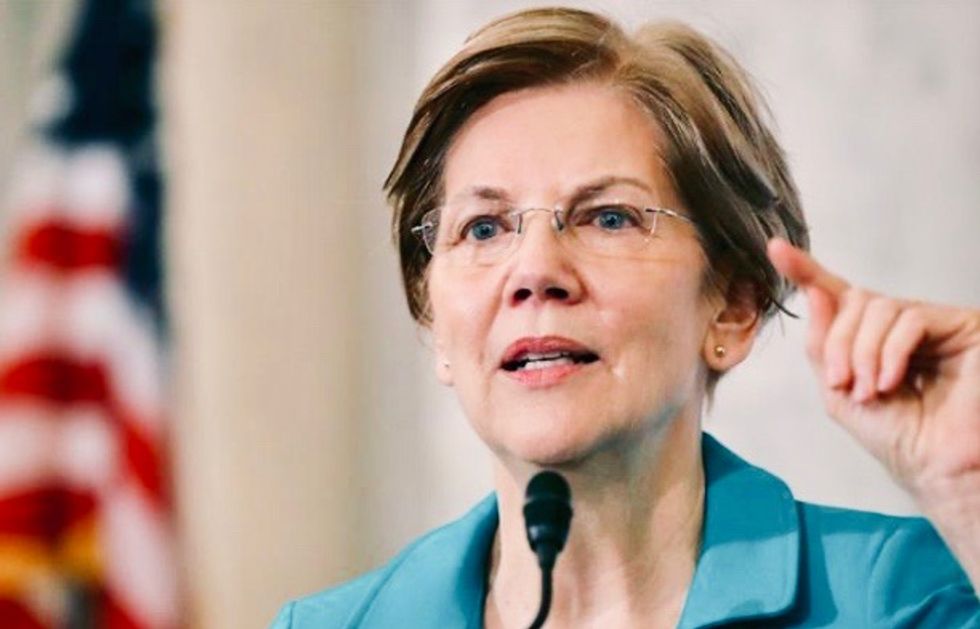 In an exchange with Federal Reserve Chairman Jerome Powell during Tuesday's Senate Banking Committee hearing, Sen. Elizabeth Warren pushed for President-elect Joe Biden to cancel student loan debt via executive authority, which the Massachusetts Democrat said would provide much-needed economic relief to millions of households, thus contributing to a stronger recovery in the aftermath of the coronavirus crisis.

As Common Dreams has reported, pressure is mounting on Biden to immediately cancel student loan debt upon taking office in January—a move that is within his power, popular with 60% of U.S. voters, and that progressives say is a clear-cut way to improve working people's lives in the midst of widespread financial hardship.

Warren on Tuesday made the case directly to Powell.

"All on his own, President-elect Biden will have the ability to administratively cancel billions of dollars in student loan debt using the authority that Congress has already given to the Secretary of Education," Warren said during the hearing.

As The Hill reported Tuesday, "Since March, student loan borrowers have been able to defer payment on loans without accruing interest and penalties, but that relief is set to expire at the end of the year."

The American Prospect's David Dayen and others have argued that "taking hundreds of dollars a month off the books of 33 million people [has been] an unsung part of the economic effect of coronavirus relief."

However, Dayen explained, millions of Americans will soon "have the sudden shock of an additional large bill" each month, with the freeze on payments scheduled to end on December 31—at precisely the moment when millions are "out of work and [have] exhausted their pandemic assistance and even unemployment benefits."

That's why Dayen called canceling student debt "not just a nice theory, but an imperative, to prevent a snap-back that is sure to crush household balance sheets."

"Many economists argue that there are better ways to boost the economy," The Hill reported, but unlike the provision of income support to households or financial aid to state and local governments, student loan debt cancellation has the advantage of not requiring the approval of recalcitrant Republicans in Congress.

"Student loan debt is different," Warren said Tuesday, describing its cancellation as "the single most effective economic stimulus that is available through executive action."

Canceling student debt would transform the lives of millions of people and help dig our economy out of this crisis—… https://t.co/wB0ZVEb4iB
— Elizabeth Warren (@Elizabeth Warren)1606832096.0

In her back-and-forth with Powell, Warren acknowledged that Powell has advocated for "more fiscal support to help families and businesses get through this crisis." Calling her question "economic stimulus 101," Warren asked Powell: "If individuals have a bit more cash to spend every month, that helps them, but it also helps the economy, right?"

The Fed chairman agreed, after which Warren said that "there are two ways to get more money into peoples' pockets."

While Warren supports strengthening unemployment insurance and distributing stimulus checks, she emphasized that this first option is unlikely at present because the GOP, led by Senate Majority Leader Mitch McConnell (R-Ky.), poses a barrier to congressional approval.

The second option—"canceling the debts that people owe so they can spend that money elsewhere"—is more feasible in our current political environment, Warren explained.

Citing an average monthly loan payment of $200 and alluding to the negative impact of student debt on the health of the broader economy, Warren asked Powell: "If people who instead of spending that money in the economy are spending that money by sending money back to the federal government on their student loan payments, that is a problem for the economy, is it not?"

Powell, who has expressed concern about the worsening student debt crisis, concurred that indebtedness, especially when combined with unemployment, can prevent people from participating "in the economy to the full extent that they might be able to, which would weigh on the economy."

Warren and Senate Minority Leader Chuck Schumer (D-N.Y.) have a resolution calling for Biden to eradicate $50,000 of federal student loan debt per borrower with the stroke of a pen as opposed to waiting for legislation, but the president-elect has so far disappointed progressives with a proposal that is both far weaker and more difficult to achieve.

According to NPR, Biden wants the government to "pay off up to $10,000 in private, nonfederal student loans for 'economically distressed' borrowers," while The Hill noted that this would happen "through legislative means, as part of his broader higher-education plan."

Not only would millions of debt-ridden, cash-strapped households be excluded from Biden's means-tested approach to student loan forgiveness, but the enactment of his plan also depends on Democrats gaining control of the Senate by winning both of Georgia's runoff elections on January 5—considered by many political observers to be a tall order.

For this reason, Warren and others have pressed Biden to act unilaterally to cancel a substantial amount of student loan debt, which comes with the dual benefits of bypassing a potentially deadlocked Congress and boosting the nation's economic recovery amid the pandemic-driven downturn.