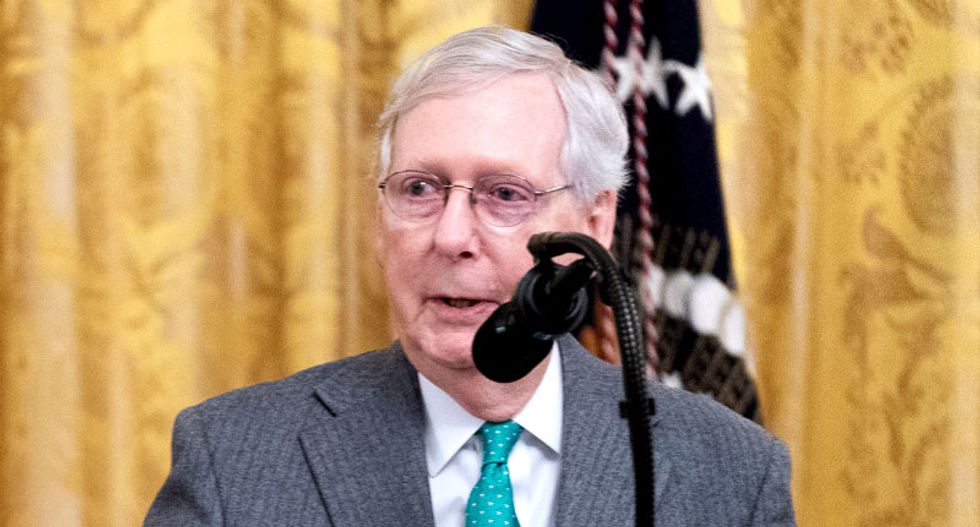 After opposing another round of stimulus checks for months in the face of deteriorating economic conditions and widespread suffering, Republican congressional leaders have finally agreed to include direct payments in a coronavirus relief package that could be approved by the end of the week.

During a private GOP conference call Wednesday, Senate Majority Leader Mitch McConnell (R-Ky.) provided a straightforward and revealing reason for the sudden change of heart: "Kelly and David are getting hammered."

McConnell was, of course, referring to Republican Sens. Kelly Loeffler and David Perdue, the Georgia incumbents now facing off against Democratic challengers Raphael Warnock and Jon Ossoff in runoff elections that conclude on January 5 and will determine control of the Senate.

The outcome of the two Georgia races—which are already driving record-shattering early voter turnout—could also determine whether Congress and the Biden administration are able to approve a relief package beyond the likely soon-to-be-finalized $900 billion measure, which progressive lawmakers and experts are criticizing as woefully inadequate.

As it stands, the relief bill would provide one-time direct payments of $600 per adult and $600 per child—significantly less than the $1,200 per adult and $500 per child under the CARES Act. The new package would also only extend emergency unemployment programs for 10 weeks as layoffs surge, setting the stage for another potential benefit lapse in the beginning of President-elect Joe Biden's first term.

In a column on Wednesday, the Washington Post's Greg Sargent noted that "'Kelly and David' have indeed been getting hammered on [coronavirus relief]. Their Democratic opponents, Raphael Warnock and Jon Ossoff, have run numerous ads—see here, here, and here—hitting Republicans over the failure to pass more economic assistance." Ossoff, as Common Dreams reported last week, has repeatedly hit Perdue over his opposition to the $1,200 checks provided under the CARES Act.

"It's plainly obvious that this pressure is a key reason that Senate Republicans are now moving towards supporting the economic relief package (which is already far less than the country needs)," argued Sargent, who stressed that Democrats have been demanding another round of direct payments for months. "The basic question before us right now... is this: What would continued Republican control mean, and what would it mean if Democrats took control instead?"

"We have long known the answer: Continued Republican control means almost no chance at anything close to what we'll need in new stimulus spending and economic assistance next year, when the economic damage and resulting misery could, if anything, spiral into something much worse," Sargent wrote. "McConnell is now plainly hoping that passing this compromise proposal will obscure this basic truth. But, given that this conversion only came after 'Kelly and David got hammered,' no one should be fooled—or let him get away with it."

As The American Prospect's David Dayen pointed out Thursday, McConnell's remark also appears to indicate that if either Perdue or Loeffler had averted a runoff by winning outright in November—thus cementing GOP control of the Senate—there likely "wouldn't be a relief package at all."

McConnell's admission that a major impetus behind the new relief bill is fear of losing the Georgia runoffs underscored the enormous stakes of the pair of races, which will come amid rising coronavirus infections and deaths, mass job loss, widespread hunger, and a looming eviction crisis.

Observers have long feared that if he is allowed to keep control of the Senate, McConnell will deliberately impose austerity on the U.S. economy in the hopes of damaging Biden and boosting the GOP's prospects in future elections.

Sawyer Hackett, a senior adviser to former presidential candidate Julián Castro, warned that McConnell's comments Wednesday suggest he "is only playing ball on Covid relief because of the races in Georgia," echoing other critics.

"If Dems don't win there," Hackett said, it "seems unlikely he comes to the table on future relief or other legislation."

For weeks, progressives have argued that to win the Senate runoffs in Georgia, Ossoff and Warnock should make their support for $1,200 stimulus checks—and Republicans' repeated obstruction of direct payments—a central component of their messaging.

"This strategy would ​give Democrats something they haven't had in years: a clear message about something tangible that Democrats will do for you​, communicating how voting for Democratic candidates will make your life better," reads a memo (pdf) released last month by a coalition of progressive organizations. "It would make the stakes of the runoffs crystal clear, directly tying votes for Warnock and Ossoff to something concrete that Democrats can and will deliver—actual results that people can see and feel."

The two Democrats appear to be taking the groups' advice. As The Hill reported earlier this week, "Both Ossoff and Warnock in recent days have been calling on Congress to pass a coronavirus relief package this year that includes direct payments to Americans."

Responding to news Wednesday that congressional leaders are now planning to include direct payments in the next stimulus package, Ossoff said in an interview with CBS News, "The fact that the Senate has obstructed direct economic relief now for going on eight months demonstrates how little they care about the economic plight of working people in this country."

"I wanna call upon Sen. Perdue to reverse his opposition" to direct payments, Ossoff continued.

In a new ad released Thursday on behalf of Ossoff and Warnock, Biden explicitly connects the Georgia runoff races to the prospect of future economic relief, warning that "there are folks in Congress threatening to do everything in their power to block our efforts."

"Georgia, I know things are tough right now. But I want you to know help is on the way. My administration is preparing to beat Covid-19 and get economic relief to the American people," says the president-elect. "Let me be clear: I need Raphael Warnock and Jon Ossoff in the United States Senate to get this done."

Brian Beutler, editor-in-chief at Crooked Media, argued Wednesday that while winning the Georgia runoffs "may be a necessary condition" to avert prolonged public health, economic, and political crises, "it's not a sufficient one."

"Upon winning Dems need to have unified resolve to do whatever they must to avoid a lost decade, including abolish the filibuster," Beutler tweeted. "So, yes, win Georgia. But then apply the lessons of the past to save the country."

Economists have argued that, at the very least, Congress must approve around $3-4.5 trillion in spending to lift the U.S. economy out of crisis and ensure a speedy recovery.

"The Senate's failure to provide crucial relief and recovery aid has left families without a lifeline and will severely damage prospects for recovery," Economic Policy Institute research director Josh Bivens said in a statement last month. "Policymakers should not phase out funding too quickly and must continue fiscal support through the end of 2024."