'He is lying -- people are dying': Calls for Texas governor to resign as he blames power outages on wind and solar 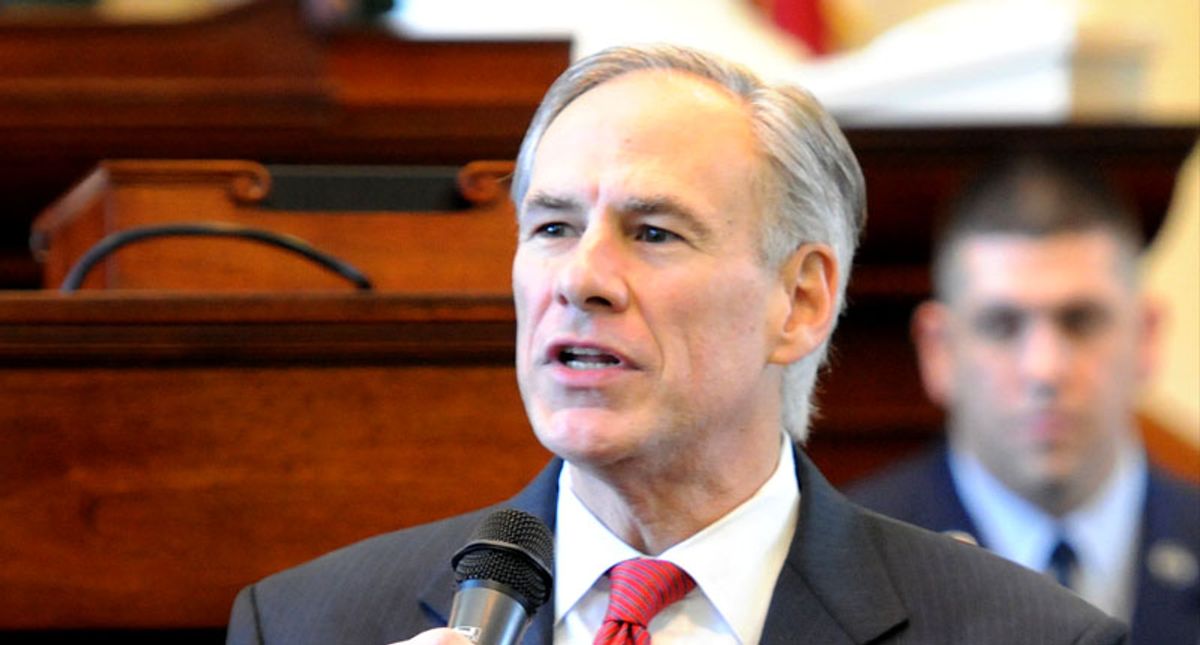 As millions of Texans struggled desperately to keep warm amid power outages stemming from the devastating winter storm sweeping the nation, the state's Republican governor late Tuesday blamed solar and wind for the blackouts—despite the fact that Texas relies overwhelmingly on fossil fuels—and claimed the crisis shows that the Green New Deal would be a "deadly deal" for the United States.

"Texas is blessed with multiple sources of energy, such as natural gas and oil and nuclear, as well as solar and wind," Gov. Greg Abbott said in an appearance on "Hannity" Tuesday night. "Our wind and our solar got shut down, and they were collectively more than 10% of our power grid. And that thrust Texas into a situation where it was lacking power in a statewide basis."

Abbott was far from the first Republican to deploy such blatantly false talking points in response to the ongoing crisis in Texas, which has left at least 10 people dead. But the governor's decision to appear on Fox News and attack a policy that has not even been implemented as Texans resorted to burning their belongings to keep their children warm was viewed as yet another example of his failed leadership.

"Five million Texans are without power tonight and temperatures are below freezing. People will most certainly die tonight because of it," said Sawyer Hackett, senior adviser to Julián Castro. "But Gov. Abbott had time to go on Sean Hannity to blame the Green New Deal."

Citing an official with the state's Electric Reliability Council (ERCOT), The Texas Tribune reported that as of Tuesday afternoon "16 gigawatts of renewable energy generation, mostly wind generation, was offline. Nearly double that, 30 gigawatts, had been lost from thermal sources, which includes gas, coal and nuclear energy."

"Texas is a gas state," Michael Webber, an energy resources professor at the University of Texas at Austin, told the Tribune. "Gas is failing in the most spectacular fashion right now."

But that hasn't stopped Texas Republicans like Abbott and Rep. Dan Crenshaw from attempting to blame frozen wind turbines for outages that could continue for days, endangering lives and coronavirus vaccines.

In response to Abbott's "Hannity" interview, Texas voting rights advocate Charlie Bonner tweeted, "He is lying. People are dying, and he is on Fox News lying to you. We are living in fear and Greg Abbott is playing politics with our lives."

"Greg Abbott doesn't care if you live or die tonight so take care of each other, my friends," Bonner added. "We're living in a failed state."

Castro sent a similar message Tuesday afternoon, writing that "Governor Abbott failed to prepare for this storm, was too slow to respond, and now blames everyone but himself for this mess."

"He neglected the state's antiquated and deregulated electrical grid," said Castro. "Now 4.4 million Texans have no power in freezing conditions."

In an interview on ABC 13 in Houston earlier Tuesday, Abbott said that officials at ERCOT—the agency that oversees Texas' power grid—should resign over their failure to be sufficiently transparent with the people of Texas during the storm and its aftermath.

But Abhi Rahman, communications director for Texas Democrats, said Abbott is the one who should step aside.

"Abbott is the leader of the state," said Rahman. "He gets briefed on emergencies. He should be the one that resigns."