The American Civil Liberties Union of Texas is suing a Houston-area school district over a dress code policy it says has led to multiple students being disciplined for having long hair.

Plaintiffs in the lawsuit include six boys and a nonbinary student ages 7-17 from Magnolia Independent School District. According to the lawsuit, which was filed in federal district court Thursday morning, the Magnolia ISD gender-based policy "imposed immense and irreparable harm" on the students, some of whom claim they have worn long hair for years while attending school in the district without any repercussions.

The lawsuit says the students have been threatened with or sent to in-school suspension for weeks at a time; some were placed in a "disciplinary alternative education program," leading three of them to unenroll from the school district. The suit also states that while the plaintiffs have been disciplined for the length of their hair, other students with long hair, such as those on high school football teams, have not faced discipline.

"To be kicked out, pushed out, of school entirely simply because of their gender and their hair is really unconscionable," ACLU of Texas staff attorney Brian Klosterboer said.

Klosterboer said the ACLU warned Magnolia ISD numerous times about how its dress code policy's gender-specific requirements violate equal protection under the 14th Amendment and Title IX, which prohibits discrimination in education institutions on the basis of sex.

In a statement, Magnolia ISD disagreed with the ACLU's claims and said it was reviewing "the lawsuit with its legal counsel and looks forward to the opportunity to respond to the Court."

"This system of differentiated dress and grooming standards have been affirmed by courts and does not inhibit equal access to educational opportunities under Title IX," the district said. "The rules are included in the student handbook each year and are similar to the codes of approximately half of the public school districts in Texas."

In a letter sent to the district in August, the ACLU of Texas said it filed a grievance in 2019 on behalf of a Magnolia ISD parent who said her son was told to cut his hair or he'd be sent to in-school suspension. The letter also cited reports the ACLU of Texas received about students repeatedly being threatened with disciplinary action or being suspended for having long hair.

Danielle Miller, whose 11-year-old child is nonbinary and a plaintiff in the lawsuit against the district, said she received a phone call from her child's school at the beginning of this school year and was told that her child would have to cut their hair. The Texas Tribune does not disclose children's names for privacy reasons.

Miller said her child was "just in absolute devastation and tears" when she told them they would have to cut their hair. 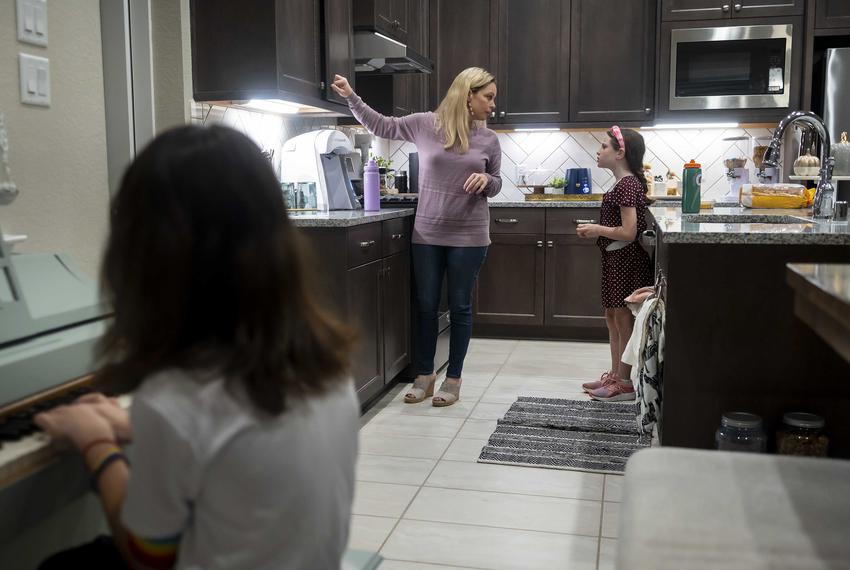 Danielle Miller prepares her two children for school in their home in Magnolia on Thursday. One of her children is a plaintiff in an ACLU lawsuit against the Magnolia Independent School District over its policy on students' hair length. Credit: Annie Mulligan for The Texas Tribune

"... Based on [my child's] reaction and how harsh and traumatized they were, I realized that we weren't going to be cutting [their] hair," Miller said.

Miller's child was placed in in-school suspension for nine days, she said. The suspension was postponed during a 60-day window to appeal the decision, which has almost run its course, Miller said.

Miller said her child has had long hair for a couple of years and that their hair length had never been a problem before.

"I have no idea what changed," Miller said. "[The district is] not saying anything, they're not responding to anybody in the community about it."

The district said its administration and board of trustees have heard from a small group of parents about concerns over the dress code policy, and they "are currently in the process of considering parent grievances on this subject matter."

According to Magnolia ISD's 2021-22 student handbook, hair must "be no longer than the bottom of a dress shirt collar, bottom of the ear, and out of the eyes for male students." Hair also cannot "be pinned up in any fashion" or "worn in a ponytail or bun for male students."

However, the ACLU argues many of the plaintiffs have worn long hair for years while enrolled in Magnolia ISD and have not faced any discipline until this year. Klosterboer said some school districts in Texas tend to rely on "old and outdated case law" as the basis for their dress code policies.

Another plaintiff, a 9-year-old Latino student identified in the lawsuit as A.C., wears long hair that he keeps in a ponytail and out of his face. His family was told on the first day of school this year that he would need to cut his hair or be sent to in-school suspension, the lawsuit says. His mother said many men in A.C.'s family wear long hair, including his dad and uncle. A.C. did not cut his hair and was placed in in-school suspension for five weeks, where he was separated from other students and wasn't able to attend his regular classes.

In September, he was sent to a "disciplinary alternative education program" outside of school for seven weeks, where he faced potentially harsher punishment. According to the lawsuit, students who don't comply with the school district's hair length policy and are sent to the alternative education program may be required to have a parent sit in class with them, go to before- or after-school detention, or lose their desk, among other measures.

This month, A.C.'s family unenrolled him from the district. However, the suit says his placement in an alternative education program has made it difficult for him to enroll in another district and he is now being home-schooled.

"Magnolia ISD has harshly punished my son and driven him out of school entirely because he is a boy with long hair. ... The district needs to stop harming our children," Azucena Laredo, A.C.'s mother, said in a statement.

In 2020, a federal judge granted two Black students from a Houston-area school district temporary relief after they were told they would have to cut their hair, which they wore in dreadlocks, to abide by district dress code policy. The case, which caught national attention, also landed on the radar of Texas lawmakers, who introduced their own version of the CROWN Act, legislation that would prohibit hair discrimination based on hair texture and protective styles that are usually associated with race. The legislation, House Bill 392, advanced out of committee during the regular session but was not taken up on the House floor for a vote.

Outside of Texas, federal courts have ruled in cases from Indiana and North Carolina that gender-specific dress codes could be linked to gender discrimination under federal law, according to the ACLU and the Texas Association of School Boards.

Disclosure: Texas Association of School Boards has been a financial supporter of The Texas Tribune, a nonprofit, nonpartisan news organization that is funded in part by donations from members, foundations and corporate sponsors. Financial supporters play no role in the Tribune's journalism. Find a complete list of them here.