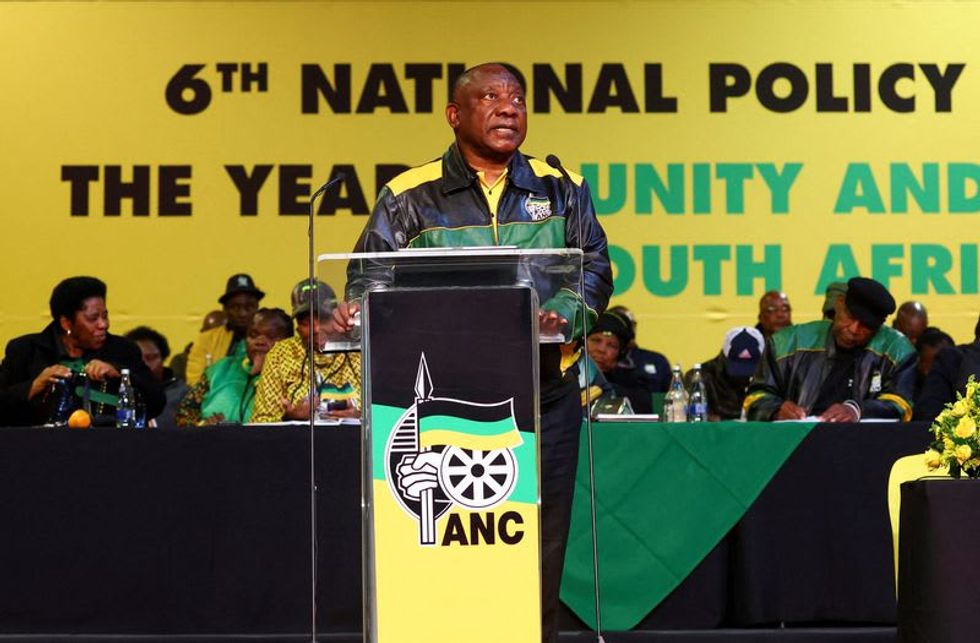 JOHANNESBURG (Reuters) - South Africa's Cyril Ramaphosa is beset by crises that have cast doubt on his presidency and left him vulnerable to a leadership challenge as his party begins the process of selecting candidates for the next national election.

As clouds gather, analysts and party insiders say his best chance of survival is that many in the governing African National Congress see him as the least objectionable nominee - both to investors and voters - in the 2024 polls, which could see the party lose its parliamentary majority for the first time since white minority rule ended nearly three decades ago.

ANC members will chose their party leader, and hence presidential nominee, in December. But the battle lines are being drawn now, with power blocks coalescing around candidates at gatherings to elect provincial party officials, and at a national policy conference last weekend.

"It's severely dented, but (Ramaphosa) still retains more trust than the other alternative political leaders," Susan Booysen, director of research at the Mapungubwe Institute for Strategic Reflection, said. "The alternatives would have to show they've got credibility."

The ANC has never been so unpopular.

A looting spree a year ago and mass shootings in July highlighted police failures and yawning wealth inequalities.

And a $4 million heist at Ramaphosa's private farm in June raised questions about his vast wealth - awkward for a leader who won his ticket on a promise to clean up endemic graft.

Four ANC insiders said Ramaphosa's rivals are to varying degrees allied with his predecessor Jacob Zuma's faction, whose victory would be seen as a setback by investors in Africa's most industrialised economy. A judicial corruption inquiry pointed to systemic graft during Zuma's tenure in 2009-2018; he denies wrongdoing.

Zuma's faction recently captured the party leadership in the ANC strongholds of Mpumalanga and Kwazulu-Natal, shrinking Ramaphosa's provincial power base.

Some ANC members also favour Deputy President David Mabuza, who hasn't said he'll run but would automatically take over if Ramaphosa is forced out early.

Ramaphosa acted decisively against COVID-19 in 2020 - imposing some of the world's toughest restrictions and expanding social welfare to prevent hunger - but has prevaricated on other contentious policy issues. It took his government over two years to start implementing plans to buy more power from private producers and cut reliance on Eskom, a process fraught with delays.

Police are probing the origin of millions of dollars worth of foreign banknotes stolen from Ramaphosa's private farm for tax or exchange control irregularities. He says the funds are from game sales and has welcomed the investigation.

"Ramaphosa is in a very weak position because of this foreign currency found in his house," said Moeletsi Mbeki, deputy chairman of the South African Institute of International Affairs and a brother of ex-president Thabo Mbeki. "He has to account for why (it) was ... not in the bank."

At the policy conference, Ramaphosa faced down Zuma allies arguing that the party should suspend a rule that any officials charged with crimes must step down while they are being investigated.

The "step-aside" rule is preventing the ANC's suspended secretary general Ace Magashule from challenging Ramaphosa after being charged with corruption. But it could come to haunt the president if he himself is charged.

Any one of his likely challengers would prompt fears from investors about "taking South Africa back to a more difficult place," Razia Khan, Standard Chartered's head of research for Africa and the Middle East, said.

Mkhize was suspended a year ago over allegations his department irregularly awarded COVID-19-related contracts to former associates. He did not respond to a request comment, but denies wrongdoing.

Mabuza has struggled to shrug off allegations - which he denies - of irregular tenders for a 2010 World Cup stadium and links to political killings. His spokeswoman did not comment.

Sisulu supported Zuma throughout the graft inquiry. He "is a valued and respected leader of the ANC," her spokesman Steve Motale said.

Duduzane Zuma - known for his designer suits, partying on speed boats in Dubai and crashing his Porsche into a minibus taxi in 2014 - is being investigated alongside his father for alleged corruption.

"I've showed up every time and pleaded not-guilty," he told Reuters. "I'm young at heart. If I want to jump on a jet ski or quad bike or a private plane, that shouldn't be an issue. I've worked hard."

If the ANC loses its parliamentary majority, it could force the party into an uneasy coalition. Several conference delegates told Reuters they still see Ramaphosa as their best bet.

"I don't see any other person who can rival him," Home Affairs Minister Aaron Motsoaledi told Reuters.

"Removing Ramaphosa would be a suicide mission. He is what has slowed down their decline," author and political analyst Ralph Mathekga said. "He's the most electable, and ... can help the party to survive."