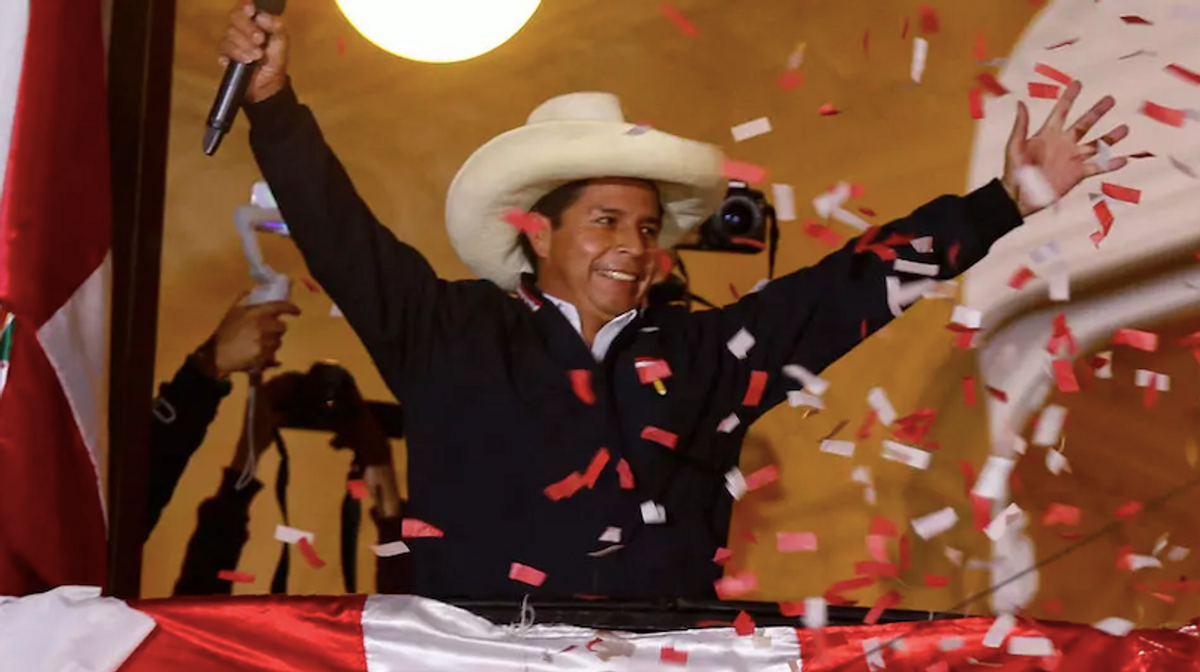 Far-left trade unionist Pedro Castillo has cast himself as the winner of Peru's presidential election, thanking foreign nations for "victory" messages even as election officials said Wednesday the race was not over.

Late Tuesday, addressing celebrating supporters in Lima, Castillo thanked Latin American countries for their messages of congratulations for his "victory".

"We will be a government respectful of democracy, of the current constitution, we will... create a government with financial and economic stability," he told the singing and dancing crowd.

He urged voting officials to be "respectful," adding: "let us not tarnish the will of the Peruvian people."

Castillo leads by more than 70,000 of the 17.4 million valid votes counted, but according to the ONPE election body, the contest officially remains open.

As in Peru's three previous presidential elections, also tightly-run, the tail-end of voting has been slow due to delays in the arrival of votes in Lima from Peru's rural and jungle areas, and from abroad -- where a million of 25 million eligible voters live.

With 89.47 percent of expat votes counted so far, Fujimori has taken more than 66 percent, but Castillo has shown himself more popular among rural electors whose ballots are still trickling in.

- Three presidents in a week -

Peruvians voted on Sunday for their fifth president in three years after a series of crises and corruption scandals saw three different leaders in the office in a single week last year.

Fujimori, 46, had led in early counting, but Castillo, 51, gained ground as votes from rural areas started coming in.

Late Monday, Fujimori alleged "irregularities" and "signs of fraud," telling a press conference she had evidence of "a clear intention to boycott the popular will."

For Fujimori, the stakes are higher than mere power.

Prosecutors in Peru have said they want to seek a prison term of more than 30 years for her on charges of taking money from scandal-tainted Brazilian construction giant Odebrecht to fund presidential bids in 2011 and 2016. She has already spent 16 months in pretrial detention.

Under Peruvian law, an election victory would see the charges suspended until after her term, but defeat could see her put on trial.

The ONPE dismissed any possibility of counting fraud, as did the Organization of American States which described the process as transparent.

Whoever wins the ideological battle between left and right will take leadership of a nation battered by recession and the world's worst coronavirus fatality rate, with more than 186,000 deaths among its 33 million population.

Two million Peruvians have lost their jobs during the pandemic and nearly a third now live in poverty, according to official figures.

Peruvians will also be looking for stability, with seven of their last 10 leaders either convicted or under investigation for graft.

In April, Castillo caused an upset by topping the first round of voting in the election to replace the latest caretaker president, Francisco Sagasti. Fujimori came in second.

The relatively unknown teacher was also consistently ahead of his rival, though narrowly so, in opinion polls ahead of Sunday's runoff vote.

Castillo has pledged to nationalize vital industries, raise taxes and increase state regulation. He has vowed to forgo a presidential salary and live on his teacher's wages.

Favored by the business sector and middle classes, Fujimori -- her bastion is the capital Lima -- sought to portray Castillo as a communist threat and warned Peru risked becoming a new Venezuela or North Korea.

Castillo, in turn, pointed to the Fujimori family's history of corruption scandals.

For years Nancy Pelosi, speaker of the US House of Representatives, was the most powerful woman in American politics, Congress's top Democrat squaring off against pugilist Republican president Donald Trump.

Today her fiercest battles -- over the scope of legislation, political ideology, and hot-button topics like Israel -- are not against an intransigent White House but rebellious progressives in her own caucus.

ProPublica is a nonprofit newsroom that investigates abuses of power. Sign up to receive our biggest stories as soon as they're published.

Despite a highly-successful eight-day overseas trip culminating with a U.S.-Russia Summit displaying his ability to right the national "ship" on the world stage, and despite favorable response from world leaders, President Joe Biden is being asked by a group of 14 Republican congressmen, led by Rep. Ronny Jackson (R-TX), to take a cognitive test to judge his mental acuity.

It all feeds into the Fox News narrative, one blown to pieces by Biden's performance in the UK with British Prime Minister Boris Johnson and Queen Elizabeth, the G7 in Brussels, meeting with NATO leaders and separately with the president of Turkey, and finally to Geneva where he held the Summit with Russian President Vladimir Putin.