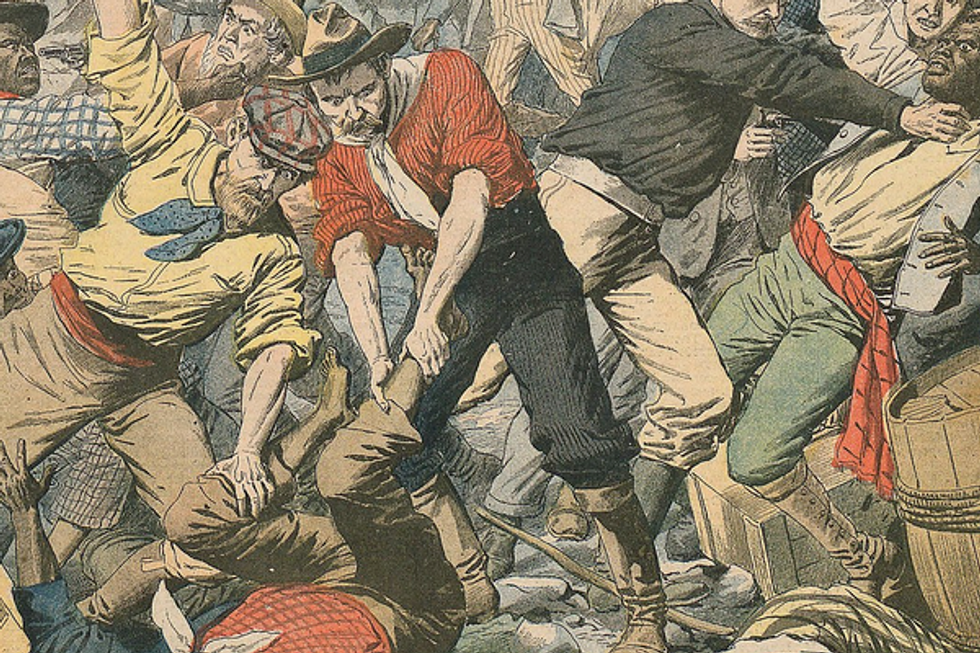 But the mob was not alone in bearing responsibility for racial terrorism: "the city and county authorities and the daily papers" were as complicit as local media, which "issued bulletins detailing the preparations" and public transport, which "brought people of the surrounding country to witness the event, which was in broad daylight with the authorities aiding and abetting this horror." In short, for Wells, terrorism did not describe the odious actions of extremist individuals and groups but was a means of political domination and racial control and served to re-establish white dominance against the political gains of Black Americans.

Wells' prescient account invites us to reconsider what we know about white supremacist terrorism in the United States. To begin with, we can see that "terrorism" is a contested term that means many different things and is used to accomplish a variety of goals. Wells invokes it to show that ostensibly isolated incidents are not an exception but an expression of long-standing social norms. These norms are not legal norms but what the philosopher Charles Mills calls a "shifting racial etiquette" that prescribes

"postures of deference and submission for the black Other, the body language of nonuppitiness…, traffic-codes of priority ('my space can walk through yours and you must step aside'), unwritten rules for determining when to acknowledge the non-white presence and when not, dictating spaces of intimacy and distance, zones of comfort and discomfort ('thus far and no farther'); and finally of course, antimiscegenation laws and lynching to proscribe and punish the ultimate violation, the penetration of black into white space."

As such, white supremacy, and the terrorism used to maintain and enforce it, are not merely the doing of a few extremist individuals but a cornerstone of U.S. politics that compels widespread complicity and often does not involve the use of direct violence. On January 6, the mob attempted to do what the President and his enablers were unable to do, but its actions are in continuity with more mundane practices designed to prevent the realization of true multiracial democracy. Wells shows us that these practices have always been a central strategy of U.S. nation-building, and U.S. citizens have routinely resorted to terrorism in pursuit of their political goals.

If we want to be better than this and redeem the promises of the nation's founders, we must recognize that this, too, is who we are. Until we confront this fact, we will not only continue to face mob violence and the corrosion of law, government, and our moral character, but also threats to national security, civil rights, democratic institutions, and global peace posed by a political system built on the idea of white superiority and the often-violent exclusion of groups perceived as threats to this system.

Syracuse University's Dr. Verena Erlenbusch-Anderson works in political philosophy and contemporary European philosophy, with a special interest in critical theory and genealogy. She is the author of Genealogies of Terrorism: Revolution, State Violence, Empire (Columbia University Press, 2018). She regularly teaches courses in philosophy of law.