Kate Mcgee, The Texas Tribue
Former U.S. Congressman Beto O'Rourke speaking with attendees at the 2019 National Forum on Wages and Working People hosted by the Center for the American Progress Action Fund and the SEIU at the Enclave in Las Vegas, Nevada. (Gage Skidmore/Flickr)
A new Quinnipiac University poll released Wednesday shows the Texas gubernatorial race has tightened between Gov. Greg Abbott and Democratic nominee Beto O’Rourke in the wake of the mass shooting in a Uvalde elementary school where 19 children and two adults were killed.

The poll, the first to come out since the May 24 shooting, found that 48% of registered Texas voters polled prefer Abbott while 43% prefer O’Rourke. That has narrowed slightly from a December Quinnipiac poll in which 52% of the registered voters who responded said they would vote for Abbott, versus 37% who chose O’Rourke.

But that number tightened dramatically in the poll released Wednesday, with 47% of voters polled now saying Abbott would handle gun issues better, versus 43% for O’Rourke. 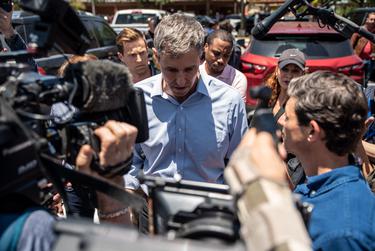 Democratic candidate for governor Beto O’Rourke speaks to the press after interrupting a press conference held by Gov. Greg Abbott and other local and statewide Republican officials at Uvalde High School on May 25, 2022. Credit: Sergio Flores for The Texas Tribune

Since the shooting, Abbott has called on multiple state agencies to improve school safety. He tasked the Texas School Safety Center with performing random safety audits of school buildings, called on the Legislature to convene committees to discuss legislative solutions, called for active-shooter training for school districts, and directed the Texas Education Agency to create a new school safety and security position.

But he hasn’t suggested potential solutions that would restrict access to firearms.

The poll found that 38% of respondents approved of Abbott’s handling of gun violence.

According to the poll, a slight majority — 51% — of Texas voters believe stricter gun laws would decrease the number of mass shootings, compared with 42% who thought such laws would make a difference in last June’s poll.

According to the poll, 58% of voters support stricter gun measures in the United States, 93% support requiring background checks for all gun buyers and 73% support raising the minimum legal age to buy any gun nationwide. But only 47% support a nationwide ban on assault weapons.

“Texans take a hard look at a harrowing series of mass killings and signal it’s time to put more teeth into gun laws. Though when it comes to assault weapons, there is a near even split on whether to outlaw their ownership,” Malloy said.

This article originally appeared in The Texas Tribune at https://www.texastribune.org/2022/06/15/poll-abbott-beto-orourke-uvalde/.

Sen. Lindsey Graham (R-SC) and key members of Trump's legal team, including Rudy Giuliani and John Eastman, have been subpoenaed by a special grand jury investigating efforts to overturn his election loss in the state, which the "Morning Joe" host said was yet another stunning loss there for the former president.