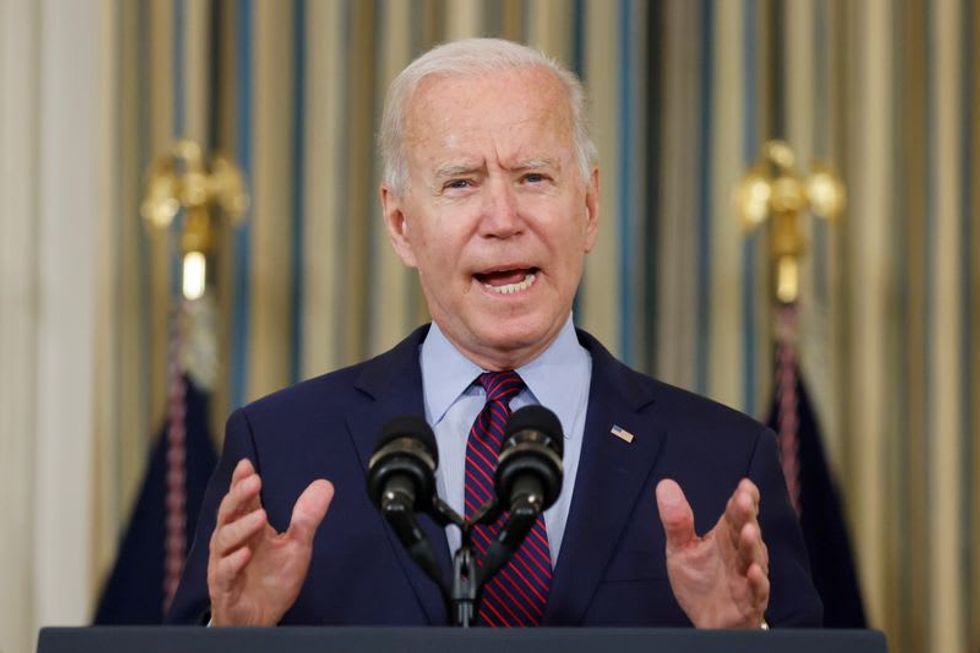 U.S. President Joe Biden piled the pressure on congressional Republicans to vote for a debt ceiling increase in a meeting with bank and business leaders at the White House on Wednesday, saying their opposition would take America "right to the brink."

During the meeting with leaders of JPMorgan Chase & Co, Intel Corp, Citigroup, Bank of America, Raytheon Technologies Corp, Nasdaq Inc and Deloitte, Biden said raising the debt ceiling is about "paying for what we owe."

"Our markets are rattled, Americans' savings are on the line...our Republican friends need to stop playing Russian roulette with the economy," Biden said.

Biden said Republicans were planning to block a debt limit vote in the Senate on Wednesday.

"It's not right and it's dangerous," he said.

Republicans want Democrats to raise the debt ceiling using reconciliation, a process that would not require Republican votes; Democrats have refused, saying Republicans should join them in the vote because the debt includes about $8 trillion in spending approved during Republican Donald Trump's presidency.

A rift over the debt limit has been growing between corporate America and congressional Republicans traditionally aligned on economic issues.

Treasury Secretary Janet Yellen has estimated that a U.S. debt default could occur around Oct. 18 if Congress fails to give the government additional borrowing authority beyond the current statutory limit of $28.4 trillion, which was reimposed after a two-year suspension expired in late July.

At the White House meeting, Yellen said the issue was urgent. "It must be resolved immediately," she said.

A coalition of groups representing investment firms and banks warned congressional leaders in a letter last week that a default would severely hurt financial markets.

"The United States of America defaulting on its obligations is not an option; we are counting on Congress to take the necessary steps to address the debt limit," wrote Neil Bradley, executive vice president and chief policy officer at the U.S. Chamber of Commerce, the nation's largest corporate lobbying group.

The Chamber spent $82 million on corporate lobbying in 2020, according to OpenSecrets, a research group that tracks political donations. Three-quarters of its campaign contributions went to Republicans in 2020, the group found.

"I didn't even know the Chamber was around anymore," U.S. House of Representatives Republican leader Kevin McCarthy told reporters on Wednesday, when asked about the business group's position. He said the lobbying group will have no influence if Republicans take the majority in congressional elections next year.