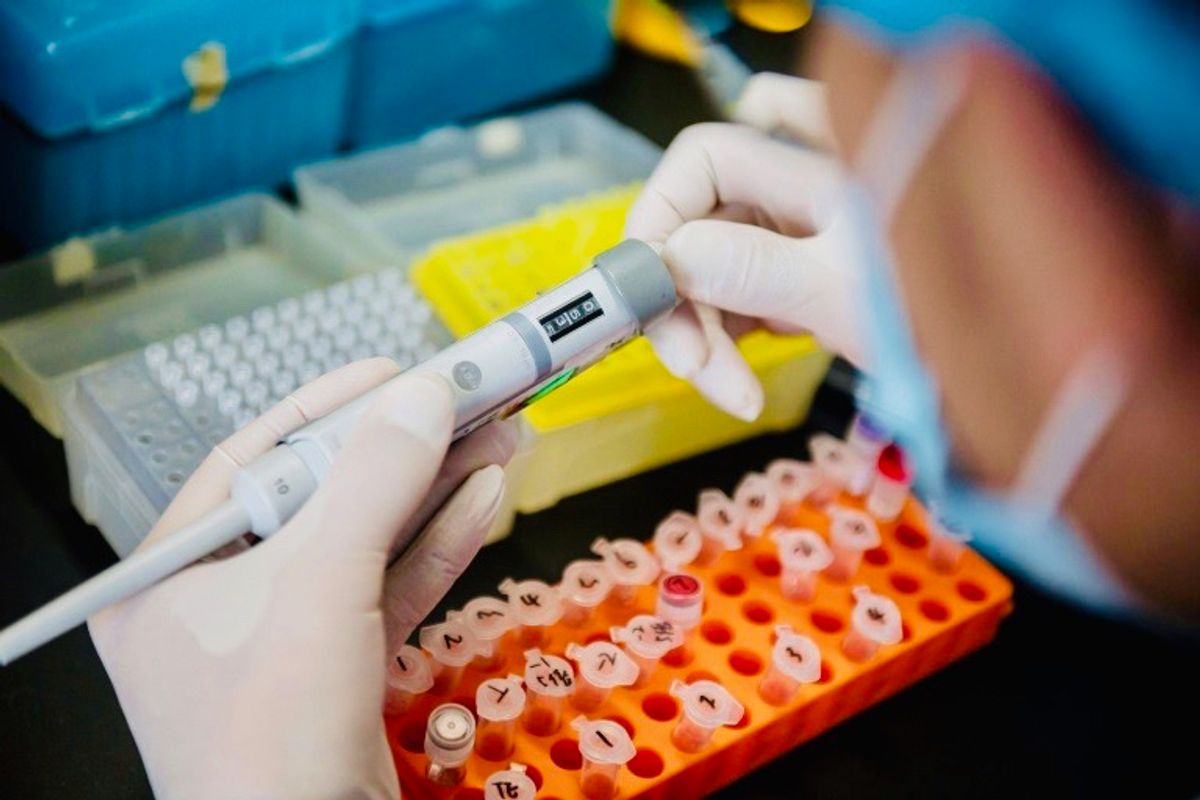 "It's morally bankrupt for rich country leaders to allow a small group of corporations to keep the vaccine technology and know-how under lock and key while selling their limited doses to the highest bidder."
—Heidi Chow, Global Justice Now

Unveiled just ahead of Pfizer and Johnson & Johnson's annual shareholder meetings on Thursday, the new report notes that Pfizer/BioNTech and Moderna are projecting revenues of $33.5 billion this year from their mRNA vaccines, which have largely been sold to rich nations.

"One of the reasons Pharma companies have been able to generate such large profits is because of intellectual property rules that restrict production to a handful of companies," the report notes, alluding to an international agreement that bars generic manufacturers from replicating vaccine formulas.

Wealthy countries, including the U.S. and European Union members, are standing in the way of an effort to temporarily waive the rules at the World Trade Organization.

"These vaccines were funded by public money and are desperately needed worldwide if we are to end this pandemic," Heidi Chow, senior campaigns and policy manager at Global Justice Now, said in a statement. "It's morally bankrupt for rich country leaders to allow a small group of corporations to keep the vaccine technology and know-how under lock and key while selling their limited doses to the highest bidder."

Maaza Seyoum, who is leading the People's Vaccine Alliance's Africa campaign, called on President Joe Biden to "put the health of all of humanity and shared economic prosperity ahead of the private profits of a few corporations" by ending U.S. opposition to the proposed intellectual property waiver.

"Big business as usual will not end this pandemic," said Seyoum. "This is clearer now more than ever."

As wealthy nations swallow up much of the existing supply, developing countries are left largely without access to vaccines as coronavirus infections continue to surge globally, fueling warnings that vaccine-resistant strains could spread widely and prolong the deadly pandemic.

According to the World Health Organization (WHO), less than 2% of the hundreds of millions of coronavirus vaccine doses that have been administered globally have gone to people in Africa, the world's second-most populous continent. More broadly, the WHO said earlier this month that just one in 500 people in low-income countries have been vaccinated, compared to nearly one in four people in rich nations.

"We should not be letting corporations decide who lives and who dies while boosting their profits. We need a people's vaccine, not a profit vaccine."
—Anna Marriott, Oxfam International

"Vaccine apartheid is not a natural phenomenon but the result of governments stepping back and allowing corporations to call the shots," said Anna Marriott, health policy manager at Oxfam International. "It is appalling that Big Pharma is making huge payouts to wealthy shareholders in the face of this global health emergency."

In its new report, the People's Vaccine Alliance notes that "while the global economy remains frozen due to the slow and uneven vaccine rollout worldwide, the soaring shares of vaccine makers has created a new wave of billionaires."

BioNTech founder Ugur Sahin is now worth $5.9 billion and Moderna CEO Stephane Bancel is worth $5.2 billion, the coalition observes.

"This is a public health emergency, not a private profit opportunity," Marriott said. "We should not be letting corporations decide who lives and who dies while boosting their profits. We need a people's vaccine, not a profit vaccine."

"Instead of creating new vaccine billionaires," Marriott added, "we need to be vaccinating billions in developing countries."