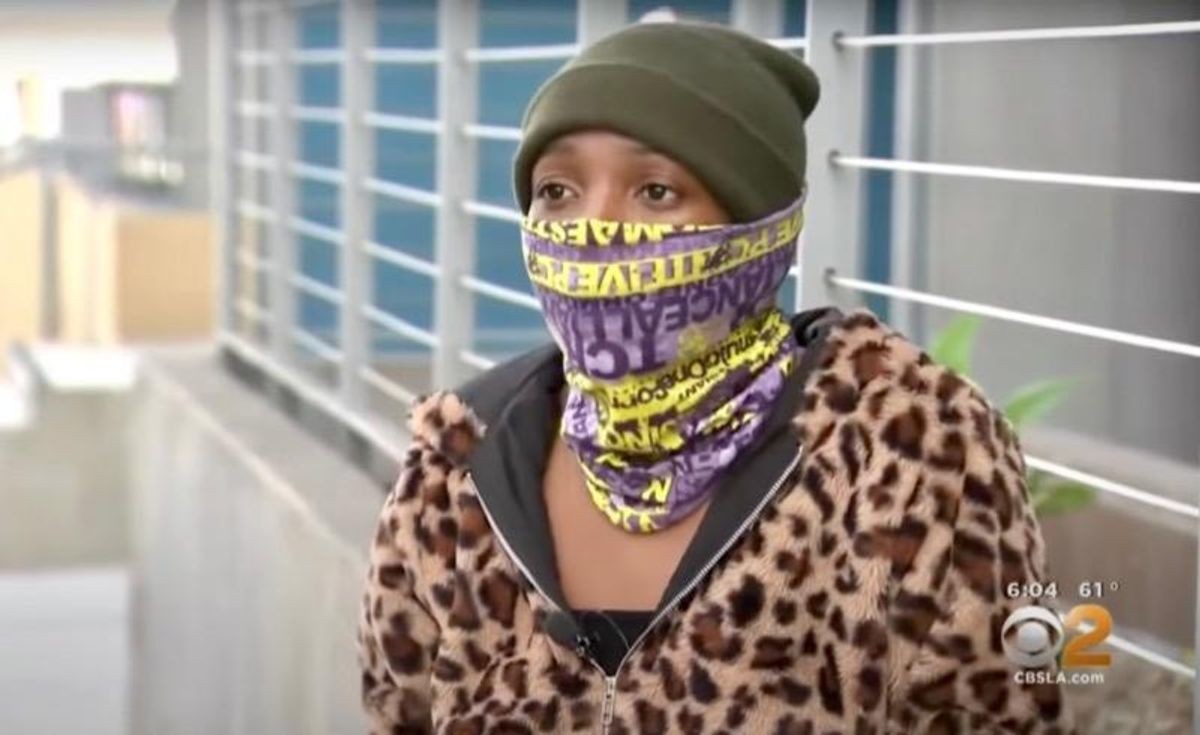 Fears of racially motivated attacks by white supremacist supporters of President Donald Trump after this week's deadly insurrection in Washington, D.C. were realized as a MAGA mob viciously attacked a Black woman and other people of color in downtown Los Angeles Wednesday afternoon.

"They're yelling at me because of my color, calling me the N-word calling me the B-word, saying, 'All lives matter, Black lives doesn't matter.'"
—Berlinda Nibo

Defying record-setting Covid-19 hospitalizations and deaths, scores of largely maskless Trump loyalists took to the streets in the middle of the nation's second-largest city to protest a lie—that the 2020 presidential election was "stolen" from the president.

Berlinda Nibo, a 25-year-old downtown resident, was walking in her neighborhood when she came upon the "Stop the Steal" demonstration. Nibo told KCAL that some of the Trumpists then began harassing her and then physically attacked her.

"They're yelling at me because of my color," she said, "calling me the N-word calling me the B-word, saying, 'All lives matter, Black lives doesn't matter.'"

Nibo told The Root that when a white woman yelled at her to take off her mask, she shouted back to put on a mask, and that's when the mob surrounded her.

"All of a sudden I'm just getting cornered by 30, 40 people," she recalled. "That's what started all of them to jump in and shoving me around. Then some lady comes out of nowhere and starts tugging on my hair, trying to pull my hair off of my head."

Nibo told KCAL that she was smacked in the face and that a man pepper-sprayed her in the eyes. Freelance photojournalist Raquel Natalicchio was covering the rally and witnessed the attack.

"I'm definitely shaken to see men beat a woman in that way, especially since there's no excuse for it," Natalicchio told The Root. "But also it was very disheartening to see so many people, like over 50 people watching this happen and nobody stepped in."

Nibo said that strangers eventually intervened to help her, including the burly, red-bearded man seen in some of Natalicchio's photos.

"He was whispering in my ear going 'You're OK, I got you, I've got you, don't do anything. These people are literally trying to kill you,'" Nibo told KCAL."If not for him stepping in at that moment, these people would have literally tried to kill me."

Other witnesses, however, said the man was no hero, and had verbally abused Nibo and at least one other woman. The eyewitnesses, including Chad Loder, a self-described "anti-fascist" and "anti-racist," posted multiple videos on Twitter supporting their claim.

NBC Los Angeles reports six people were arrested at the rally. None of the arrests involved the attack on Nibo, which Los Angeles police said they were "looking into."

Nibo told KCAL that the attack left her afraid to walk down her own street.

"I don't understand what's going on in the world," she said. "I'm saddened by it. I'm hearbroken by it."

Trump's racist rhetoric and refusal to promptly disavow white supremacists have been widely blamed for soaring hate crimes during his tenure. According to the most recent FBI statistics, there were more than 7,000 attacks and 51 hate-motivated murders reported in 2019—more than double the previous year's total.

Although the Department of Homeland Security asserts that white supremacists pose the greatest domestic terrorism threat in the U.S., Trump has largely downplayed or ignored the danger they pose. Less than a month into his administration, for example, he pushed to refocus Countering Violent Extremism—a government program tasked with combating all violent ideologies—solely on radical Islamists.

Trump has courted and inspired white supremacists from the day he announced his bid for the presidency in 2015. Not only has he refused to condemn neo-Nazis and right-wing vigilante killers, he has demonized the Black Lives Matter movement and infamously called white supremacists who attended the 2017 Charlottesville, Virginia rally where anti-racist protester Heather Heyer was murdered "very fine people."