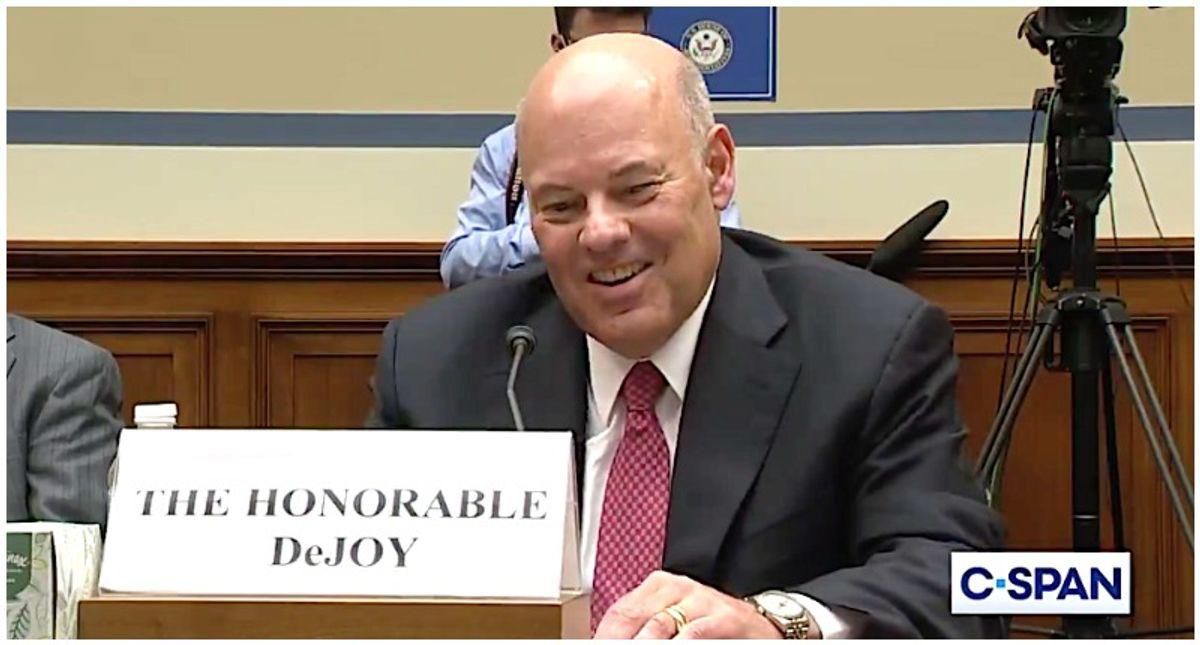 While the FBI is already investigating the scandal-plagued postmaster general for potential violations of campaign finance laws, the advocacy group Common Cause North Carolina said that Wake County District Attorney Lorrin Freeman should also open a criminal probe into DeJoy's conduct at New Breed Logistics, which he headed while simultaneously serving as a major fundraiser for Republican political candidates.

In a 20-page report (pdf) submitted to the North Carolina State Board of Elections on Monday, Common Cause alleges that "the pattern of campaign contributions from Louis DeJoy and New Breed employees to the gubernatorial campaigns of Pat McCrory follows the same pattern of other company owners who have been found guilty in North Carolina of funneling money through their employees to state candidates"—an illegal practice known as straw donations.

Prepared for Common Cause by campaign finance expert Bob Hall, the analysis builds on bombshell Washington Post reporting detailing former New Breed employees' allegations that they were "urged by DeJoy's aides or by the chief executive himself to write checks and attend fundraisers at his 15,000-square-foot gated mansion beside a Greensboro, N.C., country club."

"Employees familiar with New Breed's financial and payroll systems said DeJoy would instruct that bonus payments to staffers be boosted to help defray the cost of their contributions, an arrangement that would be unlawful," according to the Post.

"After DeJoy and his wife gave their maximum to McCrory [in 2008], seven [New Breed] employees donated a combined $3,000 to the McCrory's campaign, all on the same day—October 23, 2008," the report notes. "For all seven, it was their first donation to a NC candidate."

Similarly questionable were the donations that dozens of New Breed employees sent to McCrory's campaign during his successful bid for governor in 2012. According to Hall's findings, 54 New Breed executives and three of their wives donated $143,130 to the McCrory campaign during the 2012 race.

"For 46 of the 54 employees," Hall notes, "it was their first reportable contribution to a North Carolina candidate."

Bob Phillips, executive director of Common Cause NC, said in a statement Monday that "these new, detailed findings reveal an alarming and highly suspicious pattern of campaign donations by Louis DeJoy's employees while he led New Breed Logistics."

"We respectfully urge District Attorney Freeman to review these new findings and begin a full investigation into Mr. DeJoy's alleged political donation scheme," Phillips added. "These allegations should be thoroughly investigated and, if true, Mr. DeJoy must be held accountable."

In response to a complaint filed by Common Cause NC last September following the Post's reporting, Freeman said that "our review of what we believe to be pertinent, state campaign finance reports, did not disclose sufficient information to warrant a criminal investigation."

But Hall disagrees, writing in his memo Monday that a "careful review of contributions by DeJoy and New Breed employees to state candidates demonstrates a compelling need for state agencies, not just the FBI, to conduct a comprehensive criminal investigation of felony campaign finance violations involving hundreds of thousands of dollars to North Carolina campaigns."

While a possible FBI case against DeJoy—who was selected to lead the U.S. Postal Service in May 2020—could be constrained by a five-year federal statute of limitations for straw-donor schemes, North Carolina officials would not face such limits.